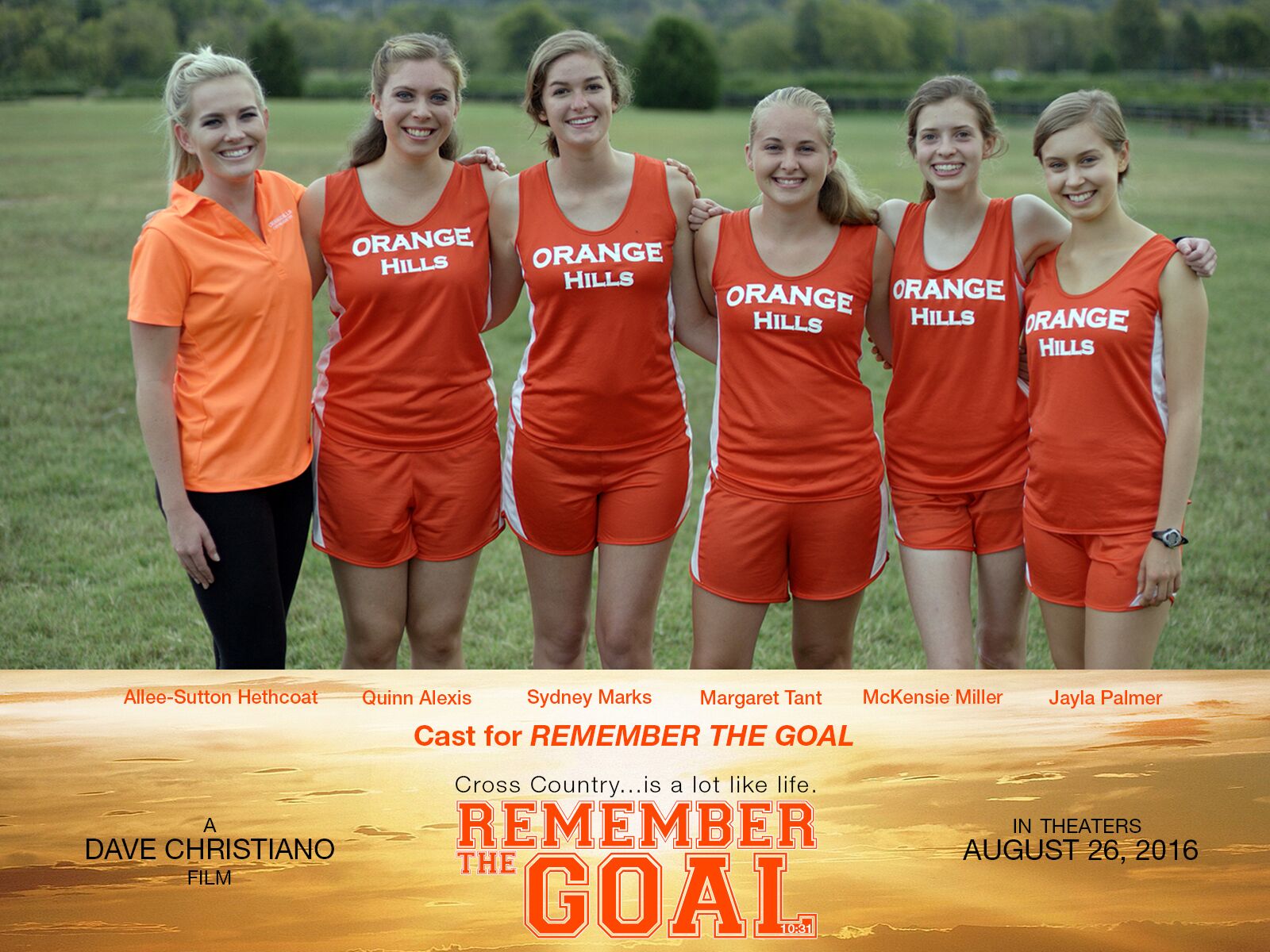 “Everybody needs a purpose in life” says Dave Christiano, the movie’s director “and one simple verse in the Bible provides the direction we all need.”

Remember The Goal is an inspirational dramatic movie about a girls cross country team coming to theaters on August 26th.  It follows the story of a new coach, fresh out of college, who takes over the girls cross country program at a private Christian school and attempts to lead them to a state title.

“The coach has great wisdom for her young age and imparts this to the girls by covering many situations and issues in the story” says Christiano.

“Allee-Sutton Hethcoat plays the lead role of Coach Courtney Smith-Donnelly” says the director. “She is terrific in this role and a strong role model and leader with high character. We need more people like her in real life and my hope is that she will be a positive influence to many.”

The theme of the movie is based on 1 Corinthians 10:31: “whether therefore ye eat, or drink, or whatsoever ye do, do all to the glory of God.”  That phrase ‘whatsoever ye do’ includes running.

Remember The Goal will speak to many important issues.

For example, the movie is a visual example of the humility and the character of Christ. It will encourage teens to obey their parents instead of disobeying them behind their back. The drama will show you one way to deal with a friend who struggles with the problem of smoking weed.

It will forever solve the self-image problem so many people deal with. It also gives teens something Christiano feels everyone desperately needs:  a purpose in life.

The movie has message for adults as well. It will make parents think about the way they address their children and what should be a priority in life. It even has an example for coaches and will make them consider changing the way they lead their teams. This particular principle applies to any sport.

A common phrase in the film, 10:31, could change a youth group or sports team. The entire movie is based on 1 Corinthians 10:31 and that one verse can be life-changing.  It’s also a movie that will present the clear gospel, something rarely heard in the movie theaters of America.

The film is set to open in theaters across 10 southeastern states including 10 cities in Louisiana on Aug. 26 as cross country season begins.

Christiano is a former runner in high school and college, plus has coached two different cross country teams. “All of the running scenes are very authentic and 100 percent accurate” said Christiano.

Actresses from Nashville, Tennessee cast as runners, namely, Quinn Alexis, Jayla Palmer, Sydney Marks, and McKensie Miller, had to do some training to prepare for their roles.

Margaret Tant, the other actress who rounds out the top five runners on “Orange Hills Academy,” is an active member on her school’s cross country team.

“I had never run before this film so I definitely had to train,” said 16-year-old Jayla Palmer, cast in the role of “Shelby.”  “I started training about two months before we started filming. I met with a cross country coach and she gave me some tips, and then I ran at home with my brothers.”

“I met the director, Dave Christiano, not long after being cast”, said Alexis.  “At our initial meeting, he gave me instructions on how to train.  Because I wasn’t a runner prior to this film, I started with a five minute jog and built up to 20 minutes and then 30 minutes nonstop.”

Sydney Marks was also a non-runner.  “I started walking for five minutes and then jogging ten minutes around my street.”

Christiano says the five actresses actually could be a pretty decent cross country team if they kept at it. They all became quite good and are very believable in their roles as runners.

“I didn’t know much about cross country before I was cast in Remember The Goal,” said Jayla, “but now I have a lot of respect for cross country runners.”

Quinn adds, “I think cross country is a beautiful sport because it combines the individual beat-your-own-best mindset with a united team effort.”

Some good results came about for the girls who were involved in this film.

“The girls and I have formed such a strong bond.  They are some of my best friends.” said Sydney.

Margaret added, “The cast and crew were so fun to work with and the girls and I are best friends now.”

Cross country is a lot like life and Remember The Goal will relate the two together.  Christiano emphasizes this movie will only come out to theaters and not be released on DVD.

“The big screen makes an impact and is the way movies were meant to be shown,” says the Director.  “These girls worked very hard on this movie and Remember The Goal can have a positive effect on teens, athletes, youth groups and parents all across the state.  I hope people will go see it”.

You can watch the official trailer and get theater information for Remember The Goal at  FiveAndTwoPictures.com.  The movie also has a Facebook page.