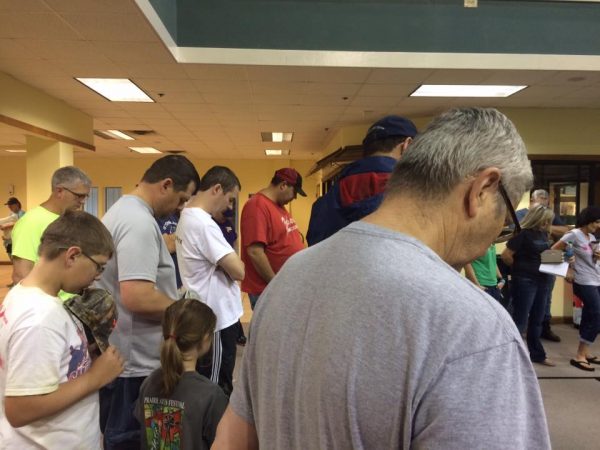 In the midst of disaster in south Louisiana, prayer has been vital. Sara Horn photo

For those of you not living in Southeast Louisiana, this past weekend was probably very different than ours. You probably watched a little of the Olympics, got ready for a new school year, or enjoyed one last summer trip or cookout.

Last Thursday night, a week ago as I’m writing this, the rain started. This is not unusual for summer in our area. But by Friday morning, the rain had started filling ditches that normally don’t fill, and covering roadways that normally don’t cover. I was on my way to a doctor’s appointment in Baton Rouge when we got the call that schools, our second full day of the new year, were closing and parents needed to come back and get their kids. Buses were already en route trying to deliver kids back home they’d just picked up.

The water came fast and no one was prepared for what was happening. A couple of buses got stuck in several feet of water because they could no longer see the road. Teachers got stuck at their respective schools because after helping their students leave, they found out the roads to their own homes were no longer passable. State offices closed and my husband had already turned around and returned to the house since major interstates were closing due to flooding.

This was rain. This wasn’t a tropical depression, or a hurricane. This was RAIN. And no one had any idea it would be this bad.

Normally when we see a flash flood alert, we’re not concerned. It usually just means it will rain, we may see some puddles, people  should stay alert who live near rivers and waterways, and the next day everything usually drys out. This isn’t what happened last weekend.

The flash flood warnings were going off through our phones every hour or so and by Friday night we knew of people who now had water in their homes and we were watching the water steadily rise on our patio and wondering if it would come into our home. Friends of ours who live one street over were already dealing with water in their house. But by the time we went to bed, the rain seemed to have stopped and water was receding.

We woke up on Saturday morning thinking it would probably be a low-key easy day at home. It had rained again during the night, hard, and I checked my office. A little water had come in but nothing bad. I mopped it up with towels and breathed a sigh of relief. But as I started scrolling through my Facebook newsfeed, I was seeing family after family we knew who were no longer at their houses because they were flooded. This was bad.

I texted our pastor and asked if the church would be doing anything and he told me they were figuring out what was going on and to meet at the church.  Cliff and I, not having any idea of what the needs might be at the moment, grabbed a toaster, some frozen waffles and syrup, some bottled water and headed to our church which is just 3 minutes from where we live.

Our small group of church members who had assembled quickly started figuring out that there were houses underwater. Whole subdivisions had flooded. Cars were covered. People were on roofs. In attics. People needing rescuing.

This isn’t New Orleans. We’re in a suburb north of Baton Rouge. We’re not below sea level. We’re 102 feet above if you really want to know. Not every neighborhood is in a flood zone. Our house borders a flood zone and so we do have flood insurance. But many neighborhoods aren’t. This past week though… a whole lot of us were.

For the last 5 days, since Saturday morning, Louisianians have been doing everything we can to help those who needed help. If your house was spared, you know 10 others whose houses weren’t. At least 40,000 homes have been flooded out. 10,000 people have been in shelters. The needs are great. But the media was virtually silent the first 4 days of what is now being called the worst natural disaster since Hurricane Sandy.

I’m sharing below some posts I wrote on Facebook over the course of the last week since all of this started. Word is just trickling out through media now. People are on their way to help. All of the volunteers who have been helping up to this point are tired, so it will be a huge encouragement to have fresh bodies into help because the work is hard and the needs are great.

Horn is a writer and member of First Baptist Church in Zachary. To read other entries about her experience with the flooding, please visit her blog.