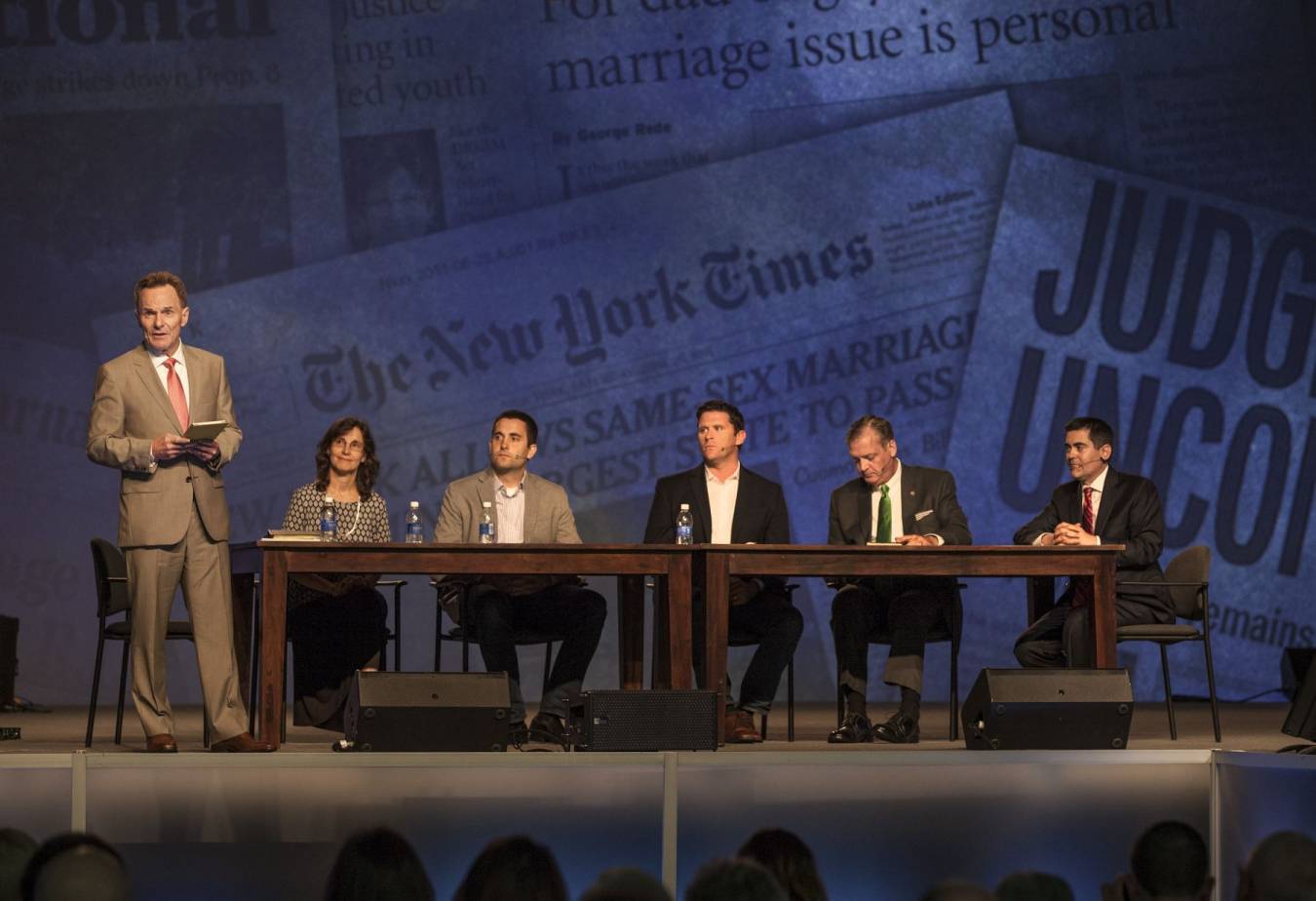 COLUMBUS, Ohio (BP) — Christians should not undervalue the effect of love or the Gospel in relating to gays and lesbians, recognizing, however, that faithfulness to the biblical definition of marriage will prove costly, members of a special panel told messengers at the 2015 Southern Baptist Convention.

During the Wednesday afternoon session (June 17), five panelists answered questions from SBC President Ronnie Floyd about how churches and pastors can minister in an American culture that increasingly approves of homosexuality and same-sex marriage.

The discussion occurred about two weeks before an expected U.S. Supreme Court ruling that could result in gay marriage’s legalization nationwide. Same-sex marriage already is legal in 37 states and the District of Columbia. In addition, the conversation came on the same day Floyd and 16 former SBC presidents released a statement saying they will not perform and the churches they pastor will not host same-sex ceremonies.

Rosaria Butterfield, an author who has chronicled her journey from lesbianism to Christ, told messengers not to “deny the power of the Gospel to change lives and to travel at the grass-roots level. Your friendships matter.

“Don’t underestimate the power of genuinely loving people with a sense of fervency and consistency and honesty,” Butterfield said in explaining how to minister to gays and lesbians. “[W]ith compassion, we’re going to speak the truth in love, but we’ve got to show up to do it.”

Matt Carter, lead pastor of Austin Stone Community Church, said the Texas church is attempting “to train the believers who go to our church to pursue [lesbian, gay, bisexual, transgender — LGBT] people with the Gospel in the same way they would pursue anybody with the Gospel.”

“We try to help our folks understand: ‘These people are not your enemy.’ Satan is our enemy. These are people that desperately need the blood and the love of Jesus Christ,” Carter told messengers.

“We offer love. We offer grace. We offer kindness. But we do call to repentance.”

For pastors, “the next decade of ministry is going to require courage,” said Ryan Blackwell, senior pastor of First Baptist Church in San Francisco. “[I]t’s important as you go into ministry in this culture that you are operating out of an identity that is firmly in the love of Christ, the relationship that you have with Him.”

Carter encouraged pastors and church staffs to make decisions ahead of time on such issues that could involve gays, lesbians and same-sex couples as baby dedications, church membership and staff hiring.

Pastors should teach their church members “a robust understanding of biblical sexuality” and instruct them “to be very good listeners,” Blackwell told messengers. “Our churches should be the safest places to have conversations about same-sex attraction.”

When asked how to help Christians with same-sex attractions, Russell Moore said the first thing needed is to “recover testimonies in our worship services in Southern Baptist churches.”

Those testimonies need to reflect the biblical reality that Christians are “all fighting spiritual warfare,” said Moore, president of the Ethics & Religious Liberty Commission. In the case of same-sex attraction, he said, a Christian would testify, “I’m a follower of Christ, and I’m having to fight and to struggle against the temptation to homosexuality.”

“[W]e need the whole body bearing one another up,” Moore told messengers.

He also urged Christian parents not to be ashamed of their gay and lesbian children. “[D]o not throw your gay [or] lesbian child out of the house,” he said.

Churches need to become communities that are safe places “to work through who I am,” Butterfield said, “and whose I am eventually.”

“The first thing we need to do is be an accessible community,” she said. “Be a rhythm-of-life community. Be a family of God [that] we can call people into.”

Mohler said the SBC and its churches must be diligent to confess and abide by biblical truth to make certain they do not follow other denominations that long ago abandoned the Word of God and the Gospel and now affirm homosexuality and gay marriage.

Southern Baptists also should say, “There but by the grace of God would we have gone — and we nearly did,” Mohler said in a reference to the SBC’s condition before its conservative, theological resurgence in the 1980s and 1990s.

At Floyd’s request, Moore closed the discussion by referencing the ERLC’s resources on the issue for pastors and churches. These include “Protecting Your Ministry,” a new legal guide for churches and other institutions, and Equip, an online initiative with the Southern Baptists of Texas Convention to aid pastors and others in ministering to the LGBT community.