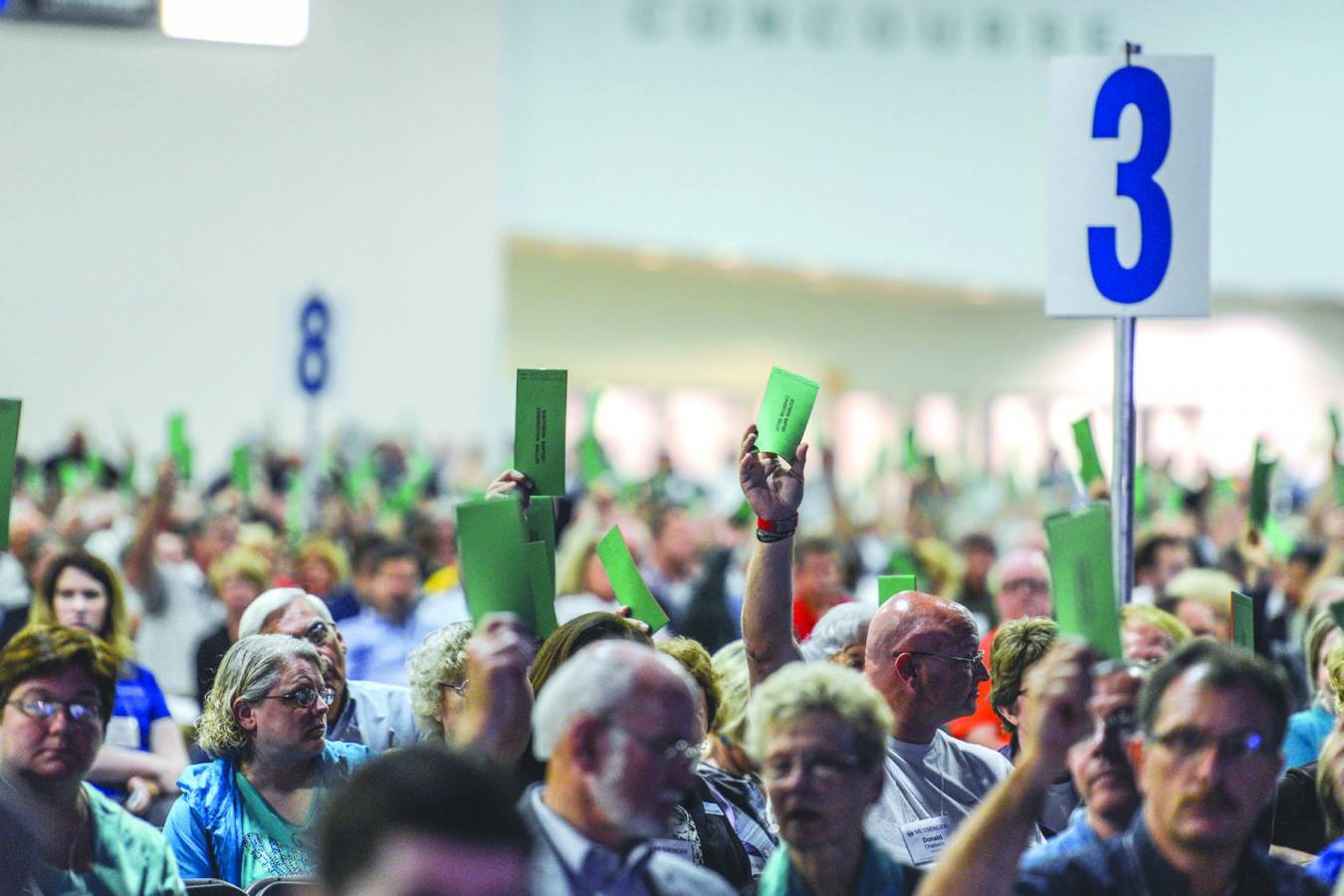 Messengers at the Southern Baptist Convention annual meeting vote on a resolutions report by raising ballots June 16 during the afternoon session at the Greater Columbus Convention Center in Columbus, Ohio

All the resolutions offered in the Tuesday afternoon session (June 16) at the SBC’s meeting gained passage by unanimous or nearly unanimous votes. The messengers affirmed biblically based stances on such topics as same-sex marriage, racial reconciliation and the sanctity of human life, as well as religious persecution and pornography. Approved resolutions also called for spiritual awakening and celebrated the 90th anniversary of the Cooperative Program.

Prior to the convention, the Resolutions Committee received only four resolutions, an unusually small number. As a result, the committee initiated more resolutions than normal, but committee chairman Steve Gaines said finding topics proved no problem.

“There are so many pressing issues morally and spiritually in our nation right now, it really didn’t take long to figure that out,” Gaines said at a news conference after the committee’s report.

He illustrated for reporters what he meant by pointing to a few of the resolutions.

“When it comes to our nation, when you look back at just the last 12 to 18 months, racial reconciliation needs to be at the top of our list,” said Gaines, senior pastor of Bellevue Baptist Church in Cordova, Tenn., a suburb of Memphis. “All of us who have children or grandchildren are very concerned about pornography. All of us are concerned about abortion and not just abortion but the sanctity of life on both ends.”

He added, “It’s not hard in light of what’s going on with [the self-proclaimed Islamic State of Iraq and Syria] and what’s going on in North Korea and other places to make resolutions” on religious persecution.

— urged the Supreme Court in its decision this summer to affirm the right of citizens to limit marriage to a male-female union, reasserted the SBC’s belief in the biblical view of marriage no matter how the justices rule and called for religious freedom for individuals and organizations who conscientiously object to same-sex marriage.

— called for SBC churches and entities to work toward racial and ethnic diversity in their leaders and encouraged Southern Baptists to be “faithful ambassadors of reconciliation.”

— affirmed the sanctity of human life “at all stages of development” and exhorted Southern Baptists to seek “the repeal of unjust laws and inhumane practices that degrade human life.”

— denounced all religious persecution and called for Southern Baptists to pray for persecuted Christians during personal times and corporate worship.

— expressed grief over the destructive impact of pornography and affirmed the power of the Gospel of Jesus to deliver those who have committed sexual immorality.

— pledged a commitment by Southern Baptists to seek God and to pray that He would bring revival.

— expressed gratitude to God upon the 90th anniversary of the Cooperative Program for His leadership in its establishment and encouraged Southern Baptist churches to consider increases in their giving through it.

— thanked God and all those who helped with this year’s meeting.

In presenting the resolutions to the messengers, the committee “knew that we were speaking on very important issues that we are facing in our culture and that I as a pastor think about that every time I preach,” Gaines said.

“We want to speak the truth, but we always want to do it in love and redemption,” he told reporters. “And we are not in any way angry with anybody. We love everybody. But when you love the Lord, you have to say what the Bible says.”