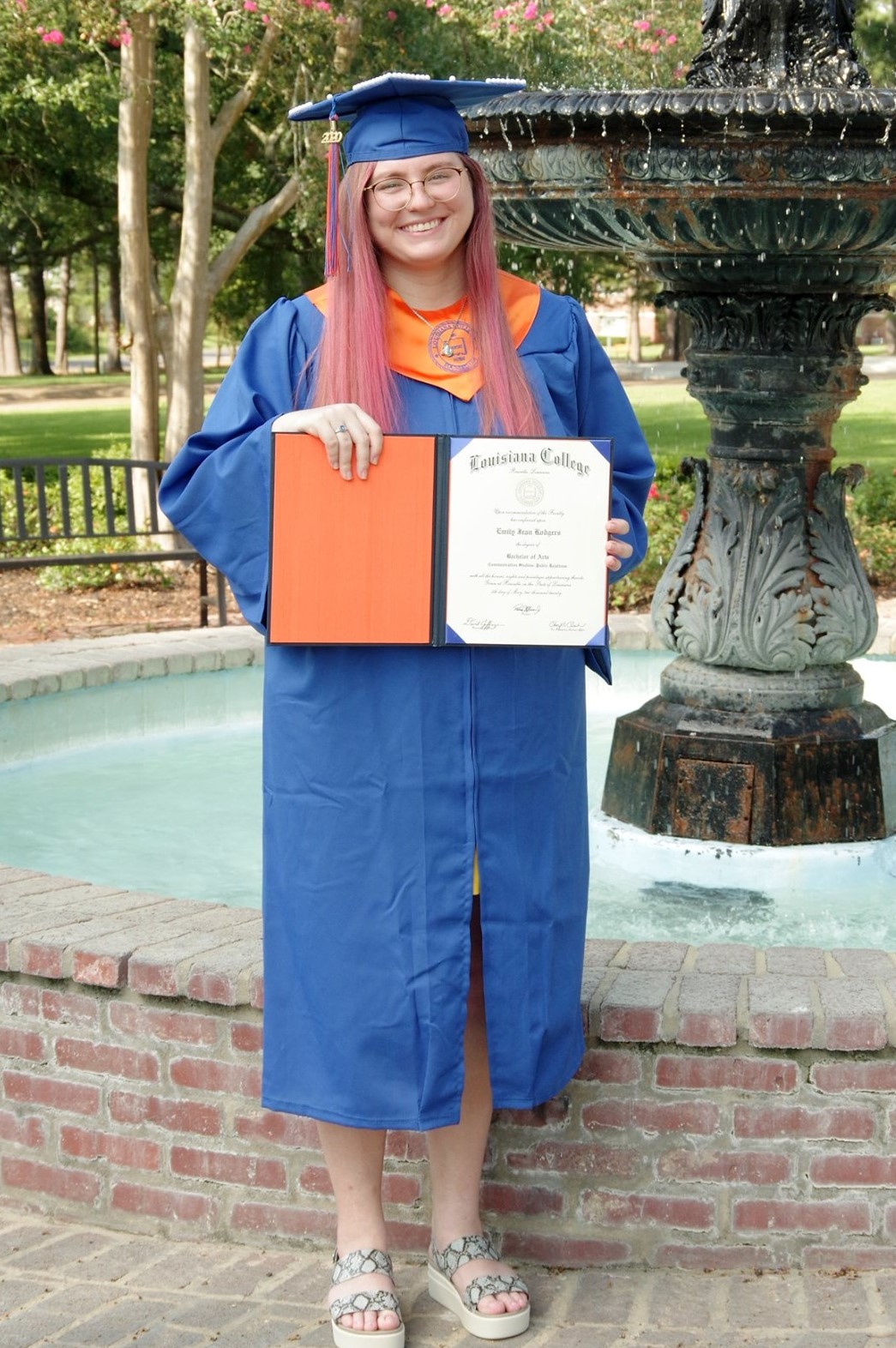 Emily Rodgers' legacy at Louisiana Christian University will continue through a scholarship in memory of her. LCU photo

PINEVILLE, La. (LCU News) – Emily Jean Rodgers would have been celebrating her 25th birthday this week as a member of Louisiana Christian University’s Class of 2020. Instead, her family and friends are sharing memories and pictures on social media — trying to make her first birthday since her death in September as joyous as possible.

To that end, the Rogers family and her professor, Elizabeth Clarke, have established the Emily Jean Rodgers Memorial Scholarship to honor her memory and legacy at her alma mater.

“Though Emily’s heavenly homecoming has left an earthly gap in our family, we are forever grateful to know Emily is in the arms of Jesus because she asked Him to be her Savior at the age of 10,” said her parents, Jeri and Joey Rodgers. “We miss her light and fun and spunk tremendously, but we rejoice that she is whole and healthy at the foot of God’s throne.”

“I couldn’t think of a better way to keep Emily alive on campus for years and years to come,” Clarke said. “Anyone who knew Emily—when you think of her, you think Jesus, her family and LCU. I want future students to know the name Emily Rodgers and aspire to be the shining example of a Christian—and just a wonderful human like she was.”

Emily died Sept. 22 in Foley, Alabama, after suffering a pulmonary embolism to her left lung. She had battled Lyme disease for two-and-a-half years and in August had surgery to remove an abdominal cyst. While the specific cause of the blood clot is unknown, any of the above-mentioned causes could lead to one.

Emily was the “poster child for vivaciousness,” mom Jeri Rodgers said, noting even her first word as a baby was not “mama” or “dada.” It was “light.”

Growing up, Emily was the friend everyone could count on, Jeri said.

From a young age, her favorite summer activity was Vacation Bible School; and at age 12 she began to lead in the worship rally in three or four different churches in her home county in Alabama every year until she graduated high school.

This led her to participate in the GO Louisiana summer missions VBS team, sponsored by the Louisiana Baptist Convention the summer after her sophomore and junior years in high school at Louisiana Christian University (formerly Louisiana College).

Emily’s parents, Jeri Page Rodgers, Class of 1987, and Joey Rodgers, Class of 1984, met at LCU. And Emily decided as a junior in high school that she wanted to follow in her parent’s footsteps she could continue to extend her family legacy and grow in her faith and. It also allowed her to live near her grandmother who lived in West Monroe and extended family in Hall Summit.

The family legacy runs even deeper at LCU — Jeri’s brother Scott Page graduated in 1980, sister Julie attended from 1988-90, and Joey’s sister, Jeri Rodgers Beachy, graduated from the school in 1977.

Emily’s family even named their cat for their alma mater, LC.

Her light just grew brighter once she arrived on campus as a freshman in the fall of 2016, Clarke said.

“Emily lit up a room even before she walked into it,” Clarke said. “You could hear her coming, her loud enthusiasm for whatever was on the menu for discussion that day, and you couldn’t help but smile.”

Emily, a public relations major, served as an LC ambassador, a member of the marching band who helped restart the color guard, a member of the symphonic band, and a member of the Baptist Collegiate Ministry, serving on the leadership team her senior year. She also was a cheerleader during her freshman year, until a shoulder injury forced her to step aside, and she played three years of intramural basketball.

To help her legacy to continue at LCU, the school has set up the Emily Jean Rodgers Memorial Scholarship. Upon being fully funded, it will annually be awarded to a student in the communication field who exemplifies her traits of loyalty to family and friends, her love of LCU, her diligence in her studies and her deep devotion to her Savior.

Or, go to the LCU website (lcuniversity.edu website), where you may click on invest in LCU orange tab on the top right of the page. On the Invest in LCU page, click on what you would like your donation to support. On that drop down menu click on Endowed Scholarships. A new box will appear after clicking on endowed scholarship and then you need to type in “Emily Jean Rodgers Memorial Scholarship” and whether you will be giving a one-time or monthly donation.

By JT Waresak I'm not a huge New Year's resolution guy. However, as a new year begins, it is another opportunity to raise the bar in my effort to be the best dad I can be. I'm also reminded that the opportune time to pour into my sons and daughters is limited to a couple of precious decades. This is not to say … END_OF_DOCUMENT_TOKEN_TO_BE_REPLACED