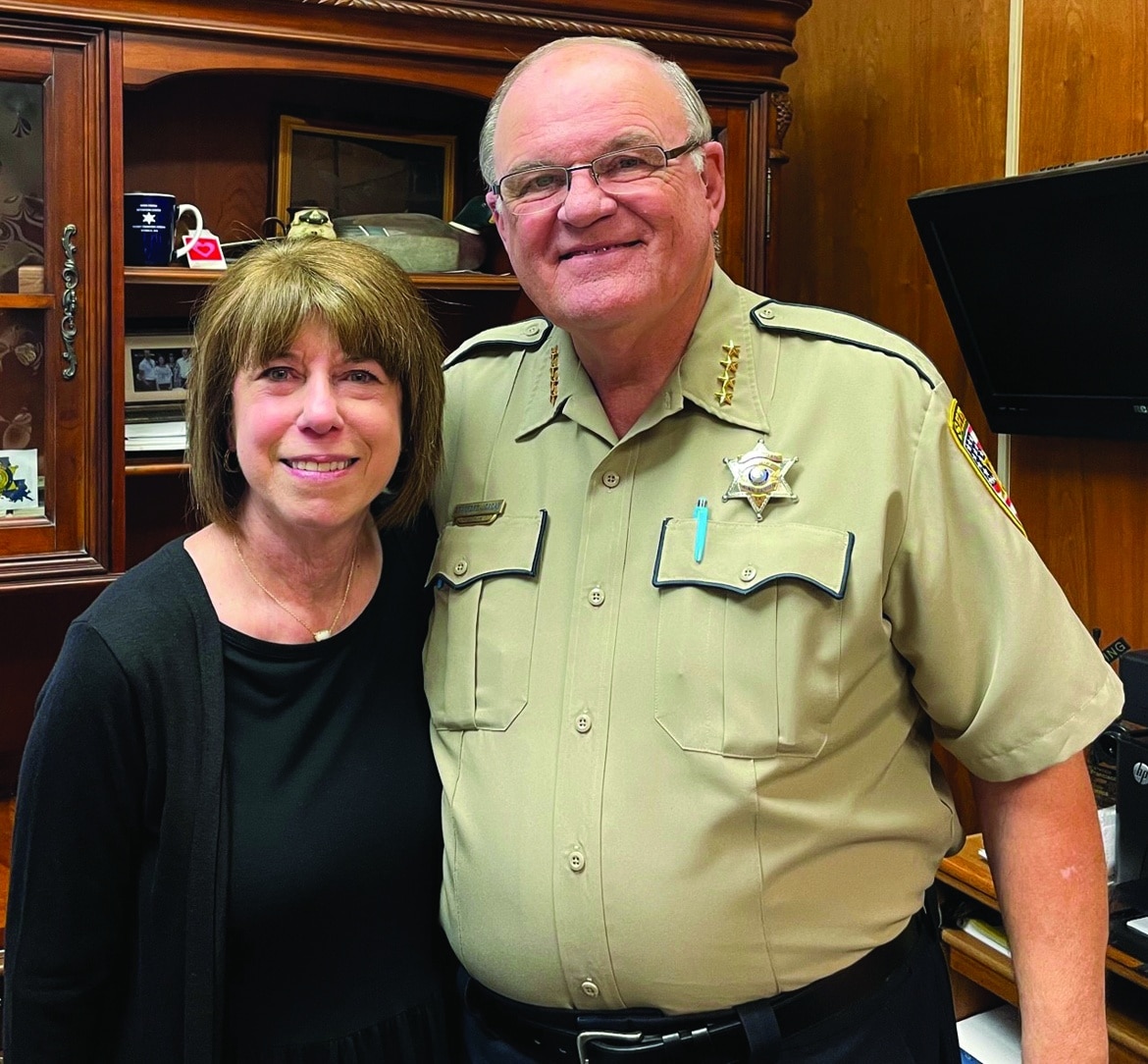 and Cranford Jordan are praising God for helping the Winn Parish Sheriff to survive COVID-19 in September of 2020. Jordan, one of 13 percent of patients to recover after being placed on a ventilator, said God answered the many prayers that went up for him. John Marcase photo

By John Marcase, Special to the Baptist Message

WINNFIELD, La. — Cranford Jordan awoke and had no idea where he was located. He did not even know the date, he recounted, explaining how five days on a ventilator impacted him.

The Winn Parish sheriff is among the millions of Americans who have contracted COVID-19. He also feels he is one of the fortunate ones.

“The experts tell us if you are over 65, overweight, have high blood pressure and are a diabetic, and you get the virus, you are not going to make it,” said Jordan. “Well, here I am. I have all four of them and I’m still here. I’m part of the 13 percent that gets off the vent.”

Jordan gave two reasons why he is part of that select 13 percent — the medical and nursing staff at Rapides Regional Medical Center, and his Lord and Savior.

“I’m here today because one, my good Lord,” says Jordan. “Prayers went up for me. And two, God answered the prayers through the nurses and medical staff at Rapides Regional Medical Center.”

The irony that Jordan would recover from COVID-19 at the Alexandria hospital was not lost on him.

Several years ago, Jordan had to take his sister to the emergency room at Rapides and the experience was not a pleasant one.

“I told my wife to never take me to Rapides Medical Center,” he says. “Well, sometimes you have to eat your words.

“My stay there in the COVID unit was excellent,’ he explained. “I couldn’t have asked for a better group of nurses to take care of me.”

It was Sept. 19, 2020, when the three-term sheriff began to feel the onset of symptoms. His family doctor, Eric Dupree, M.D., suggested he take a COVID test. It was positive. A few days later, his condition worsened.

“It was a Thursday,” recalled Dianne Jordan. “Things were getting worse. A voice said, ‘You have to do something.’ He had very little to eat that day. I called Dr. Dupree. He told me, ‘You need to get him to the hospital.”

Jordan spent the night at the Winn Parish Medical Center, where physicians made the decision to transfer him to a larger facility and placed on a breathing machine.

“The next morning, I got the phone call that they needed to ship him out, that he needed to be ventilated,” Dianne Jordan said. “At the time, I really didn’t realize — which I’m grateful that I didn’t know — that only 13 percent of the people get off the vent.”

Rapides had an opening and that is where the sheriff was transferred, not that he was aware of anything until he was able to come off the breathing machine.

“It’s kind of a helpless feeling,” Sheriff Jordan says. “You are laying there in that bed and can’t do anything for yourself. I laid there for 21,500 minutes basically, and I had excellent care the whole time. I can’t say anything but good about the staff and doctors. They changed my mind.”

Jordan and his wife are active members of the of First Baptist Church in Winnfield; and he shared that his successful battle with COVID has added a new mission for his life.

“As I was laying there, me and my good Lord had lots of talks,” says Jordan. “I trusted Him at a young age. A lot goes through your mind. During that time, I promised to do more work for my Lord and spread His Word. Since then, I’ve had the opportunity to speak to several different churches and give my testimony. One thing I agreed to do with Him was to spread the Word.”

Jordan began doing so before he was discharged from the hospital, ministering to the medical staff that was taking care of him.

“I prayed with each of the nurses that came in,” he says. “I asked them if they minded if I prayed with them. They didn’t and I prayed that God would take care of them as they ministered to us that were sick.”

As Hurricane Delta approached the Louisiana coastline on Oct. 9, 2020, Jordan was discharged from Rapides, 50 pounds lighter than before testing positive for the coronavirus. Waiting in the rain were patrol units of the sheriffs’ offices from Winn and Rapides parishes to escort Jordan home.

It was also Dianne Jordan’s first time to see her husband of more than 40 years in person since taking him to the emergency room more than two weeks earlier.

“The days were long,” she shared. “We have a wonderful neighborhood and a lot of his staff also brought items to me and kept me going. Our church, my Sunday School class, we had everyone in town praying for us. We had all denominations in our community praying for us, and it does make a difference.

“We appreciate everything everyone did,” she continued. “I know some of the people don’t make it, and that is hard on (the nurses). It is good to see people who love their job. I think God’s hand was in it and He knew where he needed to be.”

“It took me a few months to recover before I could come back to the office and work,” Sheriff Jordan added to his wife’s comments. “The reason I’m here is because of God’s grace. He saw to it to have the right people in the right place to take care of me. That’s the only reason I, or anybody, is here. I’m thankful. I give Him the credit for everything in my life.

“In good times, we sometimes don’t thank God enough. In bad times we call upon Him. I hope I serve him more and more. I’m not perfect, but I try to do the right things.”

By Steve Horn, Louisiana Baptists executive director Jesus reminds us that we should always pray and never give up (Luke 18:1). Today’s ruling from the Supreme Court serves as a good reminder of that truth. For almost 50 years, American Christians from various denominational backgrounds have been praying and … END_OF_DOCUMENT_TOKEN_TO_BE_REPLACED