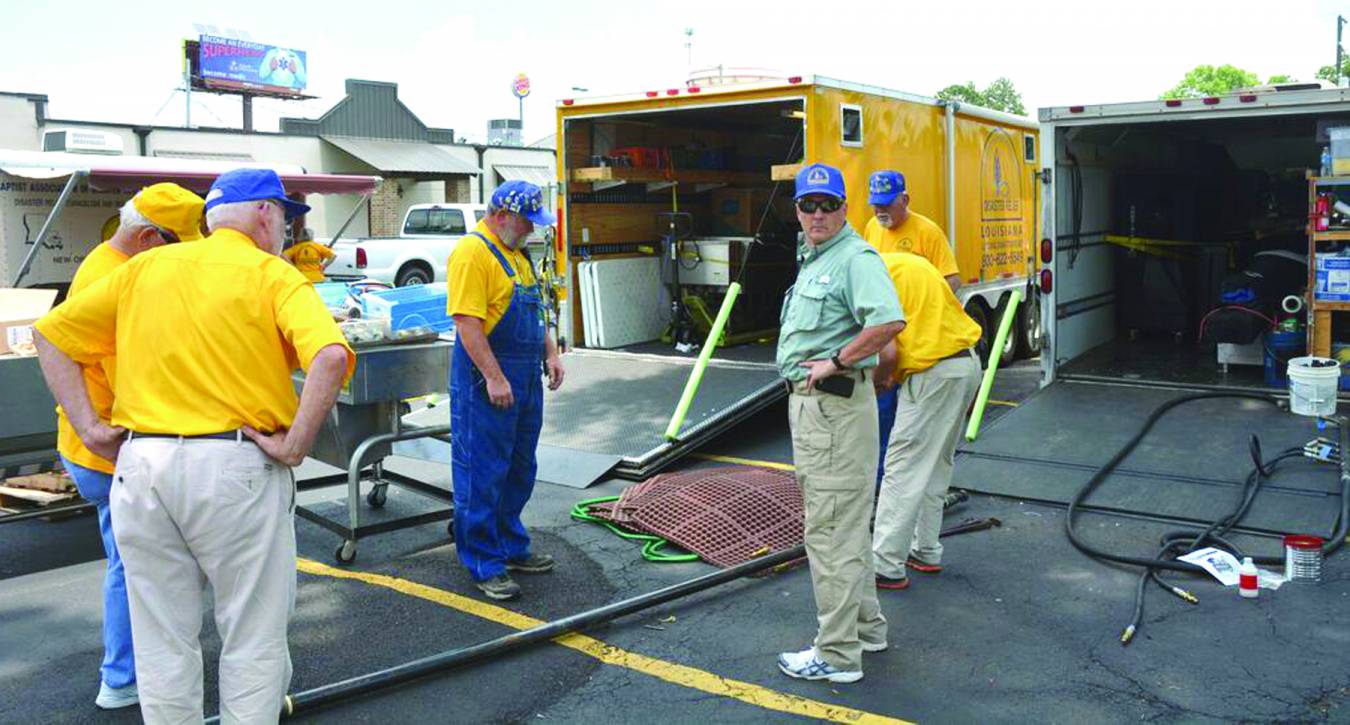 Louisiana Baptist Disaster Relief volunteers spent several hours on June 10 loading equipment onto trailers that will be used if teams are activated to areas affected by floodwaters of the Red River. Prayers, donations and even availability to volunteer on-site are needed in the coming weeks. Photo by Joe Dupree

Louisiana Baptist Disaster Relief officials are making preparations now to respond to those directly impacted by the floodwaters of the Red River – and every Louisiana Baptist has a chance to participate.
According to Louisiana Baptist state Disaster Relief Director Gibbie McMillan, four areas in north and central Louisiana likely will serve as staging areas when disaster relief teams are activated. Teams will use locations in Shreveport, Coushatta, Natchitoches and Alexandria as ministry hubs to sleep and eat at themselves. It is not certain that feeding for the public will be needed until the assessments are completed.
Though trained disaster relief team members will be working, Louisiana Baptists who have not completed official training may also serve, McMillan said. Donations to the response along with prayers also are needed. Those interested in volunteering should call the disaster relief office at 318.448.3402. Donations can be made by going to louisianabaptists.org/disasterrelief or by mailing checks to Louisiana Baptist Convention, Attn: Disaster Relief, PO Box 311, Alexandria, LA 71309.
In addition to teams from throughout Louisiana, others from out of state are also expected to come help victims of the flooding.
McMillan said the teams currently are on alert and are waiting for flood waters to recede enough for damage assessment before working on homes. About 15 blue hats – directors – of teams on June 10 met for training and loaded supplies onto disaster relief trailers in anticipation of a response.
“In disaster relief we are here to help people who may have lost everything they have,” McMillan said. “All of this is very emotional for victims, no matter how badly damaged their homes are. We want them to know that God loves them and that Jesus cares.”
As of June 10, 84 homes in the Shreveport/Bossier City area were flooded, McMillan said. Streets in the area also saw floodwater, including a small portion of the Louisiana Boardwalk in Bossier City and near the SciPort museum in Shreveport. Numerous streets also were closed, including some off and on ramps on and in some sections of lanes on I-220.
Around 250 homes were affected in Coushatta, with 50 having water in them, according to McMillan. Natchitoches was expecting flooding as well but McMillan was not certain how many homes were directly affected.
Lane Moore, director of missions for Northwest Louisiana Baptist Association, Ron Thompson, assistant to the coordinator of missions and ministries at District 8 Baptist Convention that encompasses five associations itself, and Robert Daniel, director of missions for Big Creek, Central Louisiana and North Rapides associations, said their offices had not received any reports of floodwaters reaching churches in their respective associations.

Governor Bobby Jindal’s Office of Homeland Security and Emergency Preparedness had recovery teams assessing damage in Northwest Louisiana on June 9. Information gathered will be used to coordinate with the Federal Emergency Management Agency to develop a request for President Barack Obama to issue a Major Federal Disaster Declaration because of the flooding.
“We want to make sure everything is done to help people and communities impacted by the Red River flooding,” said GOHSEP Director Kevin Davis in a press release. “The work these assessment teams perform is the first step in determining if federal assistance may be available. GOHSEP wants to make sure this information is gathered as quickly as possible to help secure a presidential disaster declaration.”
GOHSEP, the Louisiana Army National Guard and other state agencies are working with emergency managers in affected communities to mitigate as many problems as possible before the crest of the river. Assessment teams are meeting with leaders in those communities that are impacted by the disaster.
Louisiana Rep. Mike Johnson, R-Bossier City, said the community has pulled together and shown tremendous strength to the disaster. He said this is a characteristic of the community, which is part of the district he represents, and that he expects the residents will get through the disaster.
“From our earliest history to the present day, northwest Louisiana has always been known for our resilient spirit,” said Johnson, a member of First Baptist Church in Bossier City. “We face our challenges head on, and we never lose faith. We’ll get through this one, too, and be even stronger when the waters recede. You can count on it.”
Johnson added that Louisianians should be proud of how the state and local agencies and officials have handled the crisis.
“The coordination has been exceptional, and the flow of information constant,” he said. “All of us should be proud of the dedicated public servants who have been working long hours to see this through. Our local churches and volunteer organizations will continue to play a vital role in this as well, as the waters recede. Our area will be recovering from this for quite some time.”

Though disaster relief teams were not activated as of Thursday afternoon, some Louisiana Baptists have begun helping.
Some disaster relief volunteers spent some of their Tuesday surveying damage along the Red River levee. They used four-wheelers to ride along the levee, from the Caddo Parish line down to Coushatta, a 18-mile journey.
Meanwhile, the Rolling Hills Resort Ministry thrift store in Bossier City assisted a victim of the flooding with clothing. Rolling Hills Director David Abernathy said such action fulfills one of Christ’s commandments.
“When we do it to the least of these, we do it to Him,” Abernathy said. “There will be a great need for this in the weeks to come.”
James Irvine, a blue hat for a team from Mount Alive Baptist Association, said responding to a disaster has its challenges at times but is rewarding work.
“This can be a nasty job but it’s very rewarding in the end,” Irvine said. “People are overwhelmed that we come in and provide our services at no charge. We do it to help other people out because it’s our calling in life as Christians.”