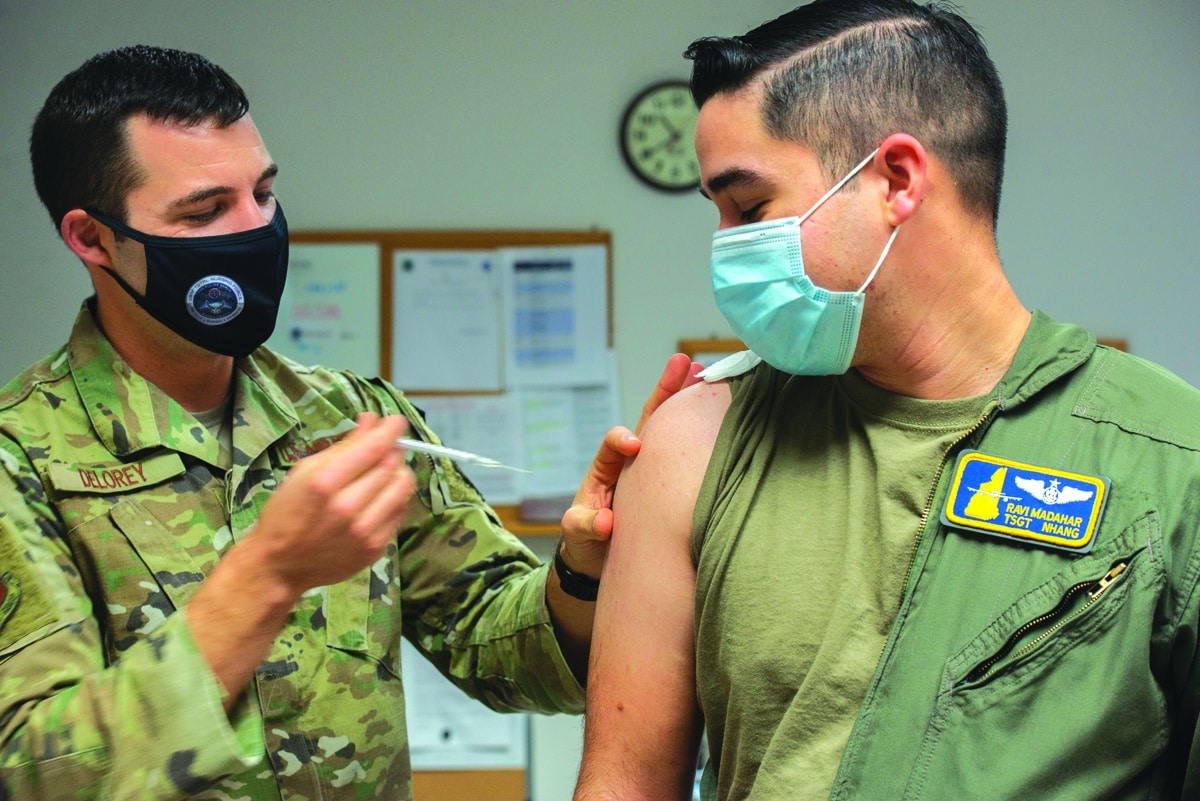 A federal judge in Texas recently issued a preleminary injunction against the vaccine mandate in a lawsuit brought by members of the U.S. Navy. USA.Gov photo

As of Dec. 29, 2021, there were 18,548 combined religious exemption requests among active-duty forces in the Air Force, Army, Marine Corps and Navy. None had been approved, although some cases are pending.

Meanwhile, the Marine Corps already has discharged 206 of those who made religious exemption requests and the Air Force has separated 27 airmen. Both the Army and Navy have said they will wait until January to begin proceedings against those who have been denied a religious exemption to the vaccine mandate.

Now, a federal judge in Texas has issued a preliminary injunction against the vaccine mandate in a lawsuit brought by elite members of the U.S. Navy.

U.S. District Court Judge Reed O’Connor, with the Northern District of Texas in Fort Worth, ruled, Jan. 3, that the DoD has violated the sailors’ constitutional right to refuse the vaccine based on their religious beliefs.

Their complaint states in part that because of “sincerely held religious beliefs regarding life and abortion, multiple plaintiffs are unable to receive any of the COVID-19 vaccines due to what they believe and understand it is a connection between these vaccines and their testing, development, or production using aborted fetal stem cell lines.”

According to the Louisiana Department of Health, the mRNA vaccines developed by Pfizer-BioNTech and Moderna do not contain fetal cells. However, during the early development phase of mRNA vaccine technology, “fetal cells were used in a ‘proof of concept’ (to demonstrate how a cell could take up mRNA and produce the SARS-CoV-2 spike protein) or to characterize the SARS-CoV-2 spike protein.”

In his 26-page order, Judge O’Connor, a George W. Bush appointee, declared “there is no military exclusion from our Constitution.” Additionally, he described the Navy’s religious accommodation process as “theater.”

“The Navy has not granted a religious exemption to any vaccine in recent memory,” he said. “It merely rubber stamps each denial.”

In April 2020, the Southern Baptist Convention’s Ethics & Religious Liberty Commission joined the U.S. Conference of Catholic Bishops and 19 other pro-life religious, medical, and political organizations to ask the U.S. Food and Drug Administration to ensure “Americans have access to a vaccine that is produced ethically,” adding “no American should be forced to choose between being vaccinated against this potentially deadly virus and violating his or her conscience.

The faith leaders implored the FDA “to not only ensure that Americans will have access to a COVID vaccine that is free of ethical concerns, but to encourage and incentivize pharmaceutical companies to use only ethical cell lines or processes for producing vaccines.”

However, none of the $10 billion dedicated to Operation Warp Speed and the development of COVID-19 vaccines was designated to provide a 100 percent pro-life ethical option.

There are approximately 1.3 million active-duty military members, and for the entirety of the 2020-2021 pandemic there were 82 COVID-19 related deaths among them (compared with 814,806 COVID-19 deaths for the whole nation).

By Jill Waggoner, ERLC WASHINGTON, D.C. (ERLC) - Richard Land served as the president of the Ethics & Religious Liberty Commission from 1988–2013. Prior to his time at the ERLC, he worked in a variety of church and political roles, many of which were involved closely with the modern pro-life movement in its … END_OF_DOCUMENT_TOKEN_TO_BE_REPLACED