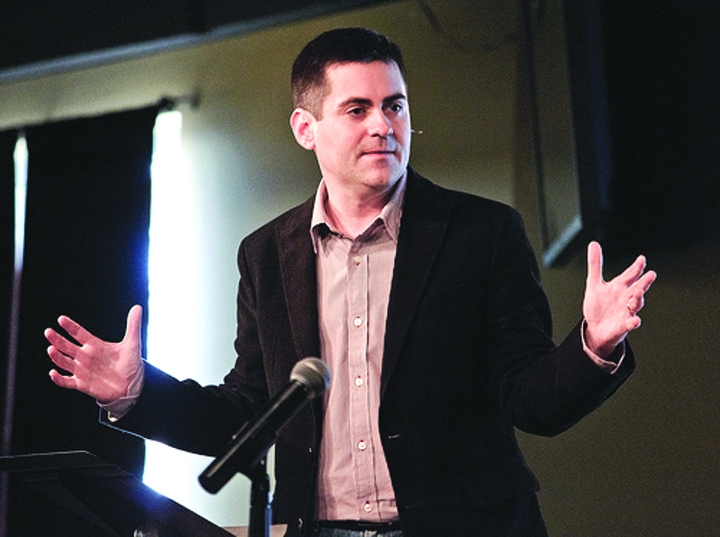 By Will Hall, Message editor

ALEXANDRIA – In a surprise development, two prominent national news outlets have investigated the turmoil created by a Southern Baptist leader because of his relentless attacks against fellow evangelicals who chose to support Donald Trump during the 2016 U.S. presidential campaign.

The Wall Street Journal and National Public Radio published separate election post-mortem investigations into the 45-year-old Russell Moore, president of the Southern Baptist Convention’s Ethics & Religious Liberty Commission, who has made himself a high-visibility figure during the presidential campaign with his inflammatory social media posts and much-publicized editorials against evangelicals printed by the liberal New York Times and Washington Post.

For his part, Moore posted an online article – the same day the Wall Street Journal article was released – titled “Election Year Thoughts at Christmastime,” giving his advice about how to “move forward” after a “divisive election.” Moreover, he appeared, at least at one point, to recast the imbroglio among Southern Baptists as a situation of others taking aim at him.

“Over the last month, there have been some pointed conversations in my denominational family about the election and the way forward, and some of them have been directed at me,” Moore wrote.

Former SBC president, Jack Graham, pastor of Prestonwood Baptist Church in Plano, Texas, told the Wall Street Journal his congregation is “considering making major changes in our support of the Southern Baptist Convention,” citing Moore’s “disrespectfulness towards Southern Baptists and other evangelical leaders, past and present.”

These sentiments were echoed by William F. Harrell, former chairman of the SBC Executive Committee in Nashville, and retired pastor of Abilene Baptist Church in the greater Augusta, Georgia, area.

Brad Whitt, who now leads Abilene Baptist, told the Wall Street Journal the congregation is weighing whether to withhold its funds from supporting the ERLC.

Robert Jeffress, pastor of First Baptist Church, Dallas, Texas, said his congregation also is considering “the wisest expenditure of its dollars,” and emphasized his deacons are “very concerned about the direction of the ERLC.”

“They do not believe it represents our church’s beliefs,” he said.

Mefferd told NPR Moore was off base to accuse evangelical Trump supporters of “selling out their principles.”

Huckabee, a Southern Baptist pastor who also served as president of the Arkansas State Baptist Convention, was more abrupt about the harshness Moore directed at others in his own denomination.

“I am utterly stunned that Russell Moore is being paid by Southern Baptists to insult them,” Huckabee told NPR.

— “What does a family Christmas look like after a divisive election?

— “[A]s Christians, how should we move forward in this Christmas season and beyond?”

Urging readers to “try to see where there are misunderstandings,” Moore said he had not “been clear” in what he was saying and not saying the past year.

“I remember one situation where I witnessed a handful of Christian political operatives excusing immorality and confusing the definition of the gospel. I was pointed in my criticisms, and felt like I ought to have been. But there were also pastors and friends who told me when they read my comments they thought I was criticizing anyone who voted for Donald Trump.” Moore explained. “I told them then, and I would tell anyone now: if that’s what you heard me say, that was not at all my intention, and I apologize.”

Moore also now instructs others to “have empathy for one another” and to remember “as Christians we are called to honor everyone (1 Peter 2:17), and we ought to take the time to understand and not caricature one another.”

WHAT MOORE SAID THEN

Moore’s new kinder and gentler perspective belies the exceptionally caustic tone he took during the campaign. Moreover, public records call into question his narrow recall of just “one situation” when he criticized only “a handful of political operatives”:

— In a September 2015 editorial, “Have evangelicals who support Trump lost their values?” printed in the New York Times, Moore called evangelicals’ support for Trump “illogical” and declared “these voters must repudiate everything they believe.”

— During a January 2016 student convocation at Liberty University, while Trump spoke, Moore tweeted a stream of negative comments, concluding that “Evangelicals can love a golden calf as long as Aaron promises to make Mexico pay for it” – an apparent reference to Trump’s plan to secure the U.S. southern border. Afterward, Moore took a swipe at Trump supporters in general, tweeting, “This is unofficial, I know, but Trump is apparently winning HUGE in the demographic of folks with eggs or cats as their Twitter avatars.”

— In a January 2016 article in Roll Call, a Washington, D.C., newspaper that covers politics in the nation’s capital, Moore declared his disdain for Trump’s (and ostensibly Cruz’s) evangelical supporters, saying, “Ted Cruz is leading in the ‘Jerry Falwell’ wing, Marco Rubio is leading the ‘Billy Graham’ wing and Trump is leading the ‘Jimmy Swaggart’ wing.”

— In a February 2016 opinion piece published in the Washington Post, Moore said “this election makes me hate the word ‘evangelical,’” asserting that self-identified evangelicals (by implication Trump supporters) “may well be drunk right now, and haven’t been into a church since someone invited them to Vacation Bible School sometime back when Seinfeld was in first-run episodes.”

— Moore also publicly criticized about 1,000 evangelical leaders who met with Trump in New York City for what organizers called “a dialog” to address concerns about his candidacy. Attendees included such prominent Southern Baptists as newly-elected SBC President Steve Gaines, pastor of Bellevue Baptist Church in Cordova, Tenn., and Tony Perkins, president of the Family Research Council and interim pastor of Greenwell Springs Baptist Church, Greenwell Springs, La. Moore’s assault against participants prompted an open letter from Jerry Vines and Jimmy Draper, two of four former SBC presidents who also were present at the June 2016 event. They made it clear they did not endorse Trump, and without mentioning Moore by name, cautioned individuals against engaging in “a carnage of intemperate words” about participants at the gathering and they urged Christians to be careful to speak truth to one another “in love.”

— His vitriol hit a crescendo in an October 9 article he penned in the Washington Post, condemning those who disagreed with him as “the old-school political Religious Right establishment.” Saying there is good news “regardless of how this election turns out,” Moore wrote “the next evangelical generation” (Moore is on the board of The Gospel Coalition, which appeals to millennial neo-Calvinists) “rejects their way.” Painting the latter group as “younger, multiethnic, gospel-centered Christians,” he caricatured the former group as “doctrinally vacuous,” implying they longed for “a lost regime of nominal, cultural ‘Christian America.’”

But, Moore has his defenders – a mixed group of Democrats, neo-Calvinists (sometimes referred to as the “Young, Restless and Reformed”), Christian liberals, supporters of the “new establishment” in the SBC, and, still others who agree with Moore on his positions about social issues.

— Rachel Held Evans, a liberal Christian blogger who “left” evangelicalism for the Episcopal Church, in part to celebrate “the inclusion of LGBT people,” defended Moore on Twitter as “no liberal,” adding “He just doesn’t think racism, sexual assault & lying is ok as long as a Republican does it.”

— Dwight McKissic, pastor of Cornerstone Baptist Church in Arlington, Texas, and an African American leader who condemned President Obama in 2012 for his endorsement of same-sex marriage, told NPR he supported Moore for his stance on police brutality. “If they succeed in ousting Russell Moore, effectively we have become the Trump Baptist Convention,” he said.

— Baptist Press, the news service of the Southern Baptist Convention, posted an open letter Dec. 21 by three Reformed theology personas: Jonathan Akin, pastor, Fairview Church, Lebanon, Tenn.; Nathan Finn, dean, School of Theology and Missions, Union University, Jackson, Tenn.; and, Micah Fries, pastor, Brainerd Baptist Church, Chattanooga, Tenn. According to BP, the three men, who described themselves as “younger Southern Baptist ministers who haven’t reached the age of forty,” called for “the [conservative] resurgence generation and their protégés” to “be the statesmen we need them to be in this season of denominational tension.” Indicating the “backlash against Moore” (representative of other fissures in cooperation) was a concern “shared by many of our generational peers,” they lamented “that these tensions could lead to division.”

Telling the Wall Street Journal he knows Moore’s heart and character, Mohler expressed confidence in Moore’s “ability to serve all Southern Baptists as president of the Ethics and Religious Liberty Commission.”

But others say – attacks on them aside – that the ERLC president was so severe toward Trump since September 2015 as to make himself ineffective as an advocate for Southern Baptists with the incoming White House administration. After eight months of constant public character assaults against Trump, Moore finally caught the candidate’s attention in May 2016, eliciting a tweet from Trump who called Moore “a truly terrible representative of Evangelicals and all of the good they stand for. A nasty guy with no heart!”

“He’s going to have no access, basically, to President Trump,” Graham told the Wall Street Journal, with Whitt offering a similar belief.

Regardless, the controversy has grown beyond expressions of concern about Moore’s aggressive behavior toward fellow Southern Baptists – whether in exposés by secular news outlets or on SBC web forums populated with competing views on the matter.

While ERLC trustees and the SBC Executive Committee have yet to address the maelstrom that has developed, one state convention has been asked to look into the matter.

During the Louisiana Baptist Convention annual meeting in November, church messengers referred a motion to the state executive board to study the recent actions of the ERLC.

David Hankins, executive director of this fellowship of about 1,650 churches, explained the matter to the Wall Street Journal in terms of Louisiana Baptist pastors’ “frustration” with Moore – growing concerns about policy positions Moore has stated and not just his lack of civility during the presidential election.

Hankins elaborated to the Baptist Message, saying, “Our people have raised issues about Dr. Moore’s support for building a mosque in New Jersey and his suggestion that judges like Roy Moore in Alabama should resign and protest as citizens rather than oppose gay marriage from the bench after the U.S. Supreme Court struck down voter-approved protections for traditional marriage in 26 states.”

Hankins told the Wall Street Journal these kinds of positions put Moore in “disagreement with a large majority of his constituents.” The executive board still is considering its next steps, he added, and churches are, too.

“I’m not aware of any churches that have pulled funding yet, but I’m aware some have said they’re going to,” Hankins said. “People are mulling their options.”