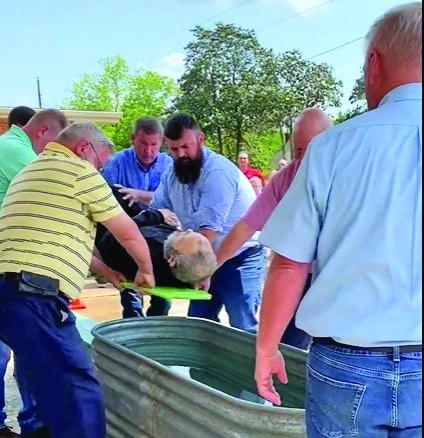 Six members from Glenmora Baptist Church carried Jack Butler on a wooden plank and then placed him in the water for Pastor Neil Treme to baptize him, May 15. Submitted photo

GLENMORA, La. (LBM) – Being wheelchair-bound could not stop 68-year-old Jack Butler from publicly declaring his faith in Jesus through baptism, May 15.

Six men, three on each side, carried Butler on a wooden plank and then placed him in the water while Pastor Neil Treme baptized him at Glenmora Baptist Church. Moments later, Brandy Butler, 45, followed.

“Whatever it took, Jack wanted to profess his faith in Christ,” Treme told the Message. “Jack really wanted people to know that he was following Christ, even though he was very sick.”

The couple accepted Christ, April 22, during an in-home visit from long-time friend James Irvine and Treme. Irvin led Jack and Treme led Brandy to a relationship with Jesus during the encounter.

“After 45 minutes, I asked them if they happened to be right with the Lord and they said no,” Irvine recalled. “I told them we can take care of that right now and I shared Scripture with them.

“It was an awesome experience to be able to lead someone like that to the Lord and then see the husband want to be baptized no matter what it took,” he continued. “God reminded me that you should never give up on people. If God wants to do something, he will make a way to see it through no matter how impossible it may seem.”

Since September 2020, nine new converts have been baptized at Glenmora Baptist, which averages 115 for Sunday worship.

Treme said the baptisms reflect the congregation’s passion for seeing others come to Christ. Despite COVID-19, the church has seen growth in its ministry to young adults, ages 19-40 (from 12 in February 2020 to 35 in early May 2022). The church also has seen the community respond to such outreach efforts as weekly visitation, meals for teachers in Glenmora and Vacation Bible School.

“God taught us whatever it takes to lead people to the Lord we have to be willing to do it,” Treme said. “It doesn’t matter if we have to go to the creek or pool to help someone be obedient and follow through with baptism. There are no barriers to what God can do.”