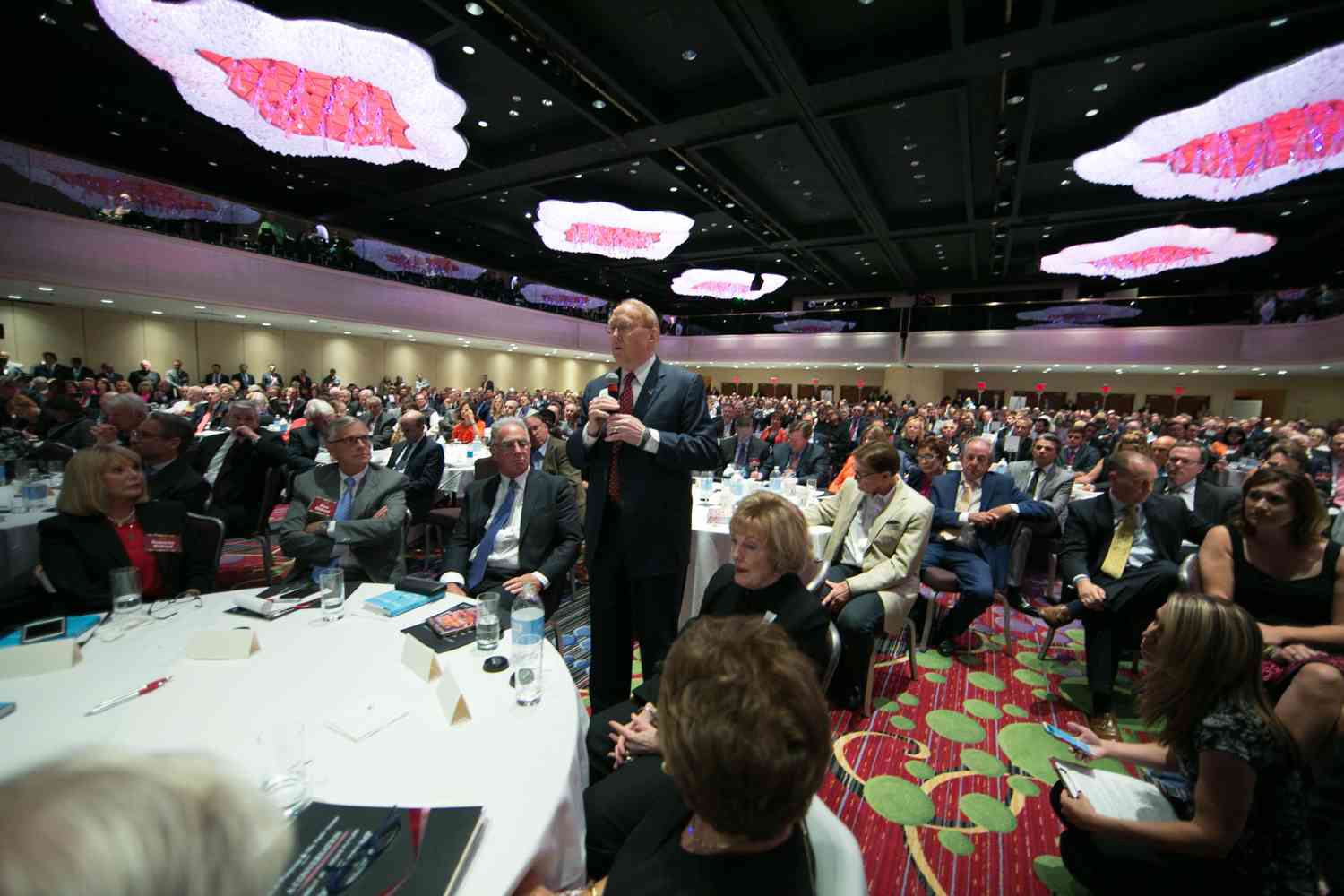 James Dobson, a member of the newly formed Donald Trump Evangelical Executive Advisory Board, poses a question to the candidate at a New York June 21 event sponsored by United in Purpose and My Faith Votes.

Nearly one-third of the board membership is made up of individuals who affiliate with the SBC.

In a news release published on the campaign website as well as in an e-mail to his supporters, Trump said the 26-member Evangelical Executive Advisory Board will lead a much larger Faith and Cultural Advisory Committee that will be announced later this month. He added that those selected were not asked to endorse Trump for president as a prerequisite for serving on the team that includes a mix of pastors of various denominations, Christian higher education presidents, evangelists, authors and attorneys.

Trump’s website stated the formation of the team reflects Trump’s endorsement of diverse issues important to evangelicals and other Christians, with a desire to have access to wise counsel of them as needed.

“I have such tremendous respect and admiration for this group and I look forward to continuing to talk about the issues important to Evangelicals, and all Americans, and the common sense solutions I will implement when I am President,” Trump said in the news release.

Some of those serving on the team helped coordinate a meeting of more than 1,000 evangelicals, including several Louisiana Baptist pastors and lay leaders, in New York City on Tuesday. During the event, Trump answered questions ranging from religious liberty to possible Supreme Court appointments. That event featured Gov. Mike Huckabee, who has twice run for president, as a moderator and, according to Christian Examiner, told Trump that he wasn’t facing an “inquisition” but honest questions from religious leaders who wanted to know his plans “to lead the nation out of the abyss.”

Floyd, who last week wrapped up a two-year term as Southern Baptist Convention president, said in a statement to the Baptist Message that the stakes never have been higher in the United States and service on the team is needed in such a critical time in the country.

“With the evangelical concerns of Supreme Court appointments, the sanctity and dignity of human life from the womb to the tomb, religious liberty at home and abroad, Israel and the Middle East, poverty, crime, violence, lack of opportunity in urban areas, and racial tension, I believe it is incumbent on me to serve in this advisory capacity,” said Floyd, pastor of Cross Church with several campuses in northwest Arkansas. “My participation on this advisory board should not be seen as an endorsement, but as an avenue to voice what matters to evangelicals. I have written and stated numerous times; I have not and will not endorse a presidential candidate. I welcome the opportunity to advise any candidate for the Office of President of the United States on important evangelical issues regardless of their political party.”

Richard Land, president of Southern Evangelical Seminary and editor of the Christian Post, wrote in a column earlier today for the Christian Post that he could not turn down such an opportunity to speak biblical wisdom into Trump’s life.

“We as Christians often ask ourselves ‘what would Jesus do?’” he continued. “Frankly, I cannot imagine our Savior would draw His robes around Himself and walk on the other side of the street and spurn Mr. Trump’s request for spiritual counsel and advice.

“And for the record, if the presumptive Democratic presidential nominee Hillary Clinton asked me to join a similar advisory board to give her my understanding of what biblical truth has to say to the issues of the current campaign and beyond, how would I justify saying no?”

On June 21, Trump unveiled his Evangelical Executive Advisory Board, which has a strong Southern Baptist presence (*):

Any tool can be misused. A hammer can construct or kill. An electrical wire can give instant light or, if mishandled, bring sudden death. … END_OF_DOCUMENT_TOKEN_TO_BE_REPLACED