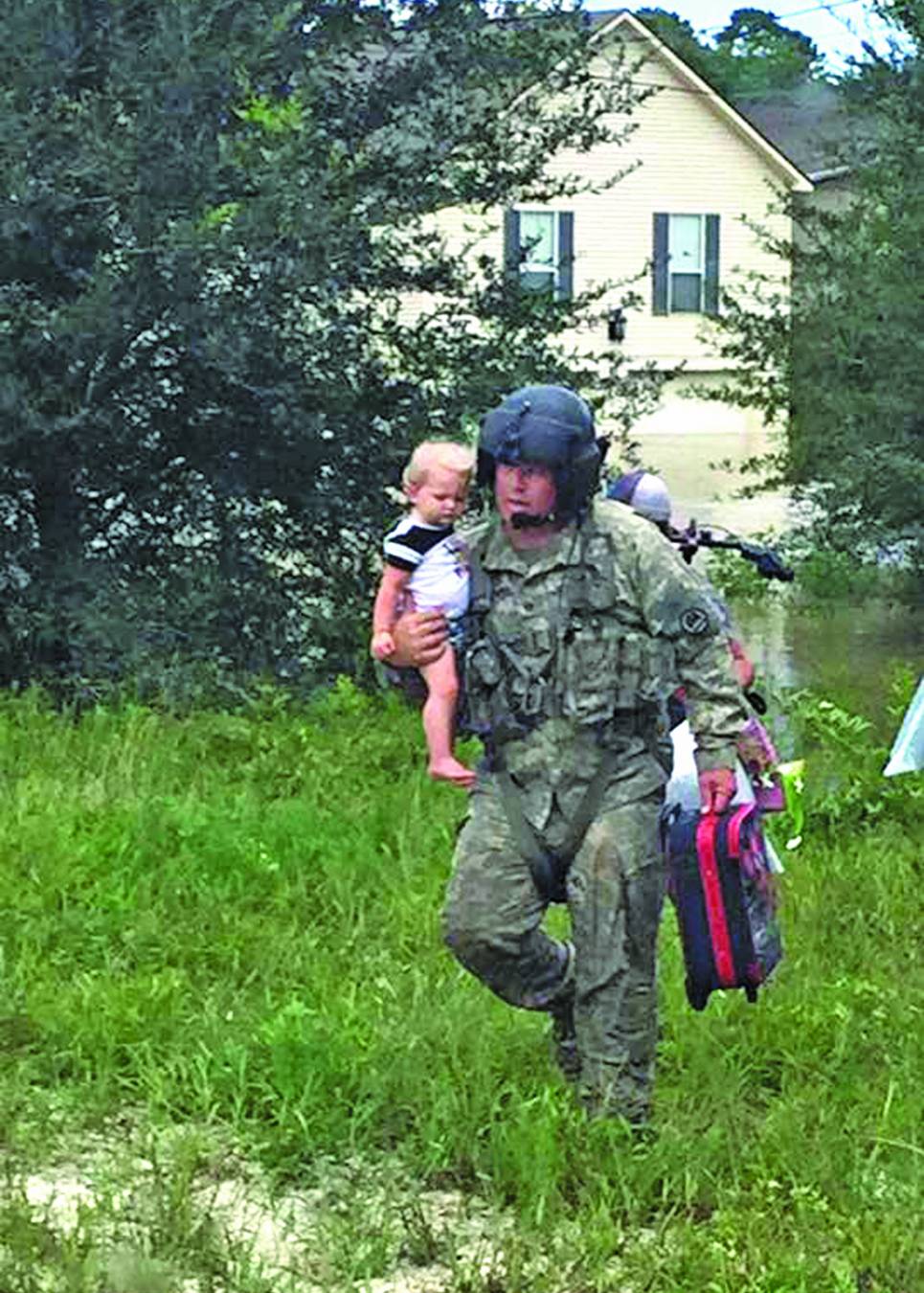 SSG Chad McCann, a member of Union Baptist Church, Deville, and a crewman on a UH-60L Black Hawk, carries this 18-month-old baby girl to the safety of the helicopter on a Aug. 15 rescue mission. Jesse Curtis photo

FRENCH SETTLEMENT — The crew of the UH-60L Black Hawk helicopter was assigned search and rescue duties Aug. 15, flying along the Amite River when a small group of people flagged them down.

The chopper, part of F Co 2-135th AVN, an Army National Guard aviation support unit based in Pineville, hovered as team members tried to assess the needs of those stranded on the ground.

NOT A TYPICAL MONDAY

“We could see a walker sitting in the small boat and an elderly lady sitting in the boat,” said Staff Sergeant Chad McCann, a member of Union Baptist Church, Deville. “We realized we couldn’t do a hoist rescue so the pilots [Chief Warrant Officer 2 Jesse Curtis and Chief Warrant Officer 2 Walt Clement] inched the chopper down to a small sand island between two houses.

As the medic, Staff Sergeant Scott Hamilton, went over to assess the needs, McCann borrowed a small boat and followed after him.

What they found was much more than they anticipated.

“Not only was there an elderly woman, but she had just recently had brain surgery,” McCann said. “There also was a young mother (the woman’s daughter) and two small children. We quickly got the grandmother secured in the helicopter and I went back to help the lady with her children.”

McCann, an imposing figure at 6-foot-4, 285 pounds and the father of two, was a little surprised he got the smaller of the two children to come so easily to him.

“I did not know if she would come to me,” McCann  said. “But I clapped my hands and she came right to me.

“She may have been 18 months old” he said. “As I was carrying her to the helicopter she wrapped her arms around my neck and patted me on the back of my helmet. It was as if she was telling me everything is going to be all right.”

It was a moment that made McCann take a moment and pause.

McCann and his fellow crew members had been going strong from morning to night through the weekend before, with Aug. 14 presenting the biggest challenges.

“Sunday was by far the worst day,” said McCann. “We – CW2 Ricky Caldwell and CW2 Jesse Futrell, Hamilton and McCann — rescued 42 – 19 by hoist — that day in some of the worst of conditions imagined. Most of our hoists were in a driving rain … a monsoon. But this is what we have trained for as a unit.”

McCann added that even being combat-trained the scenes they came upon were emotionally impacting.

“The devastation we are seeing is just unbelievable,” said McCann. “There is water to the roofs of homes as far as you can see. And the Amite River is still rising and methodically washing away foundations, structures, and trees.”

McCann — who made 80 lifts after Hurricane Katrina, served a tour in Afghanistan and as recently as March, rescued six people in Winnfield — was stunned by the amount of flooding he has seen.

“This doesn’t even compare to Katrina. It is way worse … more widespread,” he said. “Those people in New Orleans live in a bowl but these people live in areas that have never flooded … not in a 1,000 years. They had no way of knowing this was going to happen when they went to bed Friday night.

“When they awoke at 3 a.m. Saturday morning, they had three feet of water in their homes,” said McCann. “And it hasn’t stopped. But these people are amazing. Everyone has a boat and they immediately put them to use. It is neighbor helping neighbor.”

His unit is flying over some of the hardest hit areas — Baker, Zachary, Denham Springs, Amite, French Settlement, and up and down the Amite River – and he said it takes a toll on the crew spiritually, emotionally and physically from seeing so many people enduring this kind of hardship.

He asks people to pray for him and his unit’s safety, but especially for the people devastated by the flood.

“Pray for all these people down here,” he said. “They have lost everything. They have lost their homes, their possessions, and their livelihood. But they haven’t lost hope. We are meeting some amazing people every day. So, please pray for God to strengthen these people.

“And, if possible, please send food, water and clothes this way,” McCann said. “The need is great.”

By Lane Corley MADISONVILLE, La. - Three years ago, our family was going through one of those down seasons in the ups and downs of life. My mental focus and physical health was declining. I was discouraged and struggling mentally and emotionally. I knew I needed to change a few habits. As part of a recovery … END_OF_DOCUMENT_TOKEN_TO_BE_REPLACED