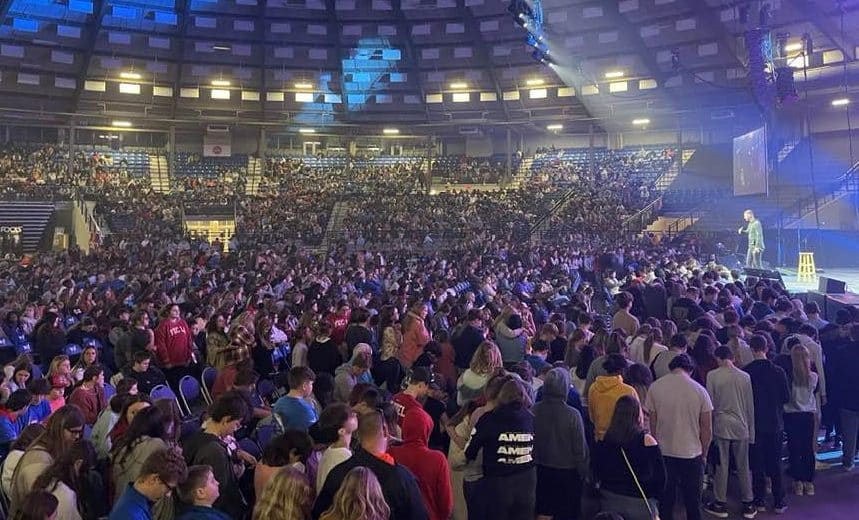 Shane Pruitt, National Next Gen Evangelism Director for the North American Mission Board, addresses students who came forward during a time of decision at YEC.

ALEXANDRIA, La. (LBM) – Organizers and participants of the recent Youth Evangelism Celebration praised God for the 830 students who made decisions for Christ, Nov. 20-21, at the Rapides Parish Coliseum in Alexandria. They also were grateful to Him for the estimated 5,300 teens who attended YEC (the largest annual gathering of Louisiana Baptists).

Both numbers were significant increases  compared to last year’s event, which drew a crowd of 4,500  and facilitated 719 decisions for Christ.

“It is incredibly powerful to see more than 5000 students join in worship and engage with God’s Word,” Louisiana Baptist Youth Strategist Brandon Lewis told the Baptist Message. “But to see them respond, whether they were accepting God’s free gift of salvation or expressing a call to ministry, is evidence of their desire to know Him, to follow Him and to tell others about Him.”

YEC challenged the Louisiana Baptist youth to share their story of how Christ changed their lives through messages by Shane Pruitt, National Next Gen Evangelism Director for the North American Mission Board.

During all four sessions, students were offered a chance to step forward and declare a decision for Christ.

Jocelyn Carmona, a ninth grader from Tangipahoa Baptist Church, Kentwood, was one of those who made a decision. Six students from her church also decided to receive Christ.

Carmona noted that “even when you are in the lowest darkest place ever imagined, I learned there is always a way to rise up from it.”

In his messages, Pruitt challenged the students to become followers and not fans of Jesus.

“A fan of Jesus does what fans do,” Pruitt told the students. “Fans aren’t really in the game. They may have a respect for Jesus but keep their distance.

“Followers are all in,” he continued. “They say He is my Savior and He is my Lord. When Jesus saves you, He doesn’t just become your Savior; he becomes your Lord.”

Pruitt encouraged students to accept Jesus’ calling to salvation, a ministry of making Jesus known and, for some, a leadership vocational position that equips the Saints.

“You have the greatest news,” Pruitt said. “It’s time for the church to stand up and be bold with the message of Jesus Christ.”

By the end of the two-day spiritual encounter, more than 830 students had made some type of faith decision: 228 professions of faith, 155 responses to calls to ministry, 350 acts of repentance to restore fellowship with Christ and 97 other commitments. Students will be connected with a local church for follow-up, and baptism will be encouraged.

In addition to messages by Pruitt, participants enjoyed music by KB and Rush of Fools, entertainment by Jared Hall, and prayers led by students from around the state. YEC 2022 concluded with a concert by We Are Messengers, an award-winning contemporary Christian artist.

Students and adult leaders also were challenged to share their testimonies with classmates, family members, co-workers, and others. During the Monday afternoon session, Pruitt explained how the Three Circles Gospel conversation tool was an effective way to share the Gospel with others.

This was the sixth of a multi-year rotation to equip students with various tools to share Christ. Those who began the training as seventh graders during the 2016 YEC will be familiar with seven different evangelistic tools by the time they are seniors.

“It’s not your job to save anybody,” Pruitt said. “But it is your job to point people to the one who can save, Jesus Christ.”