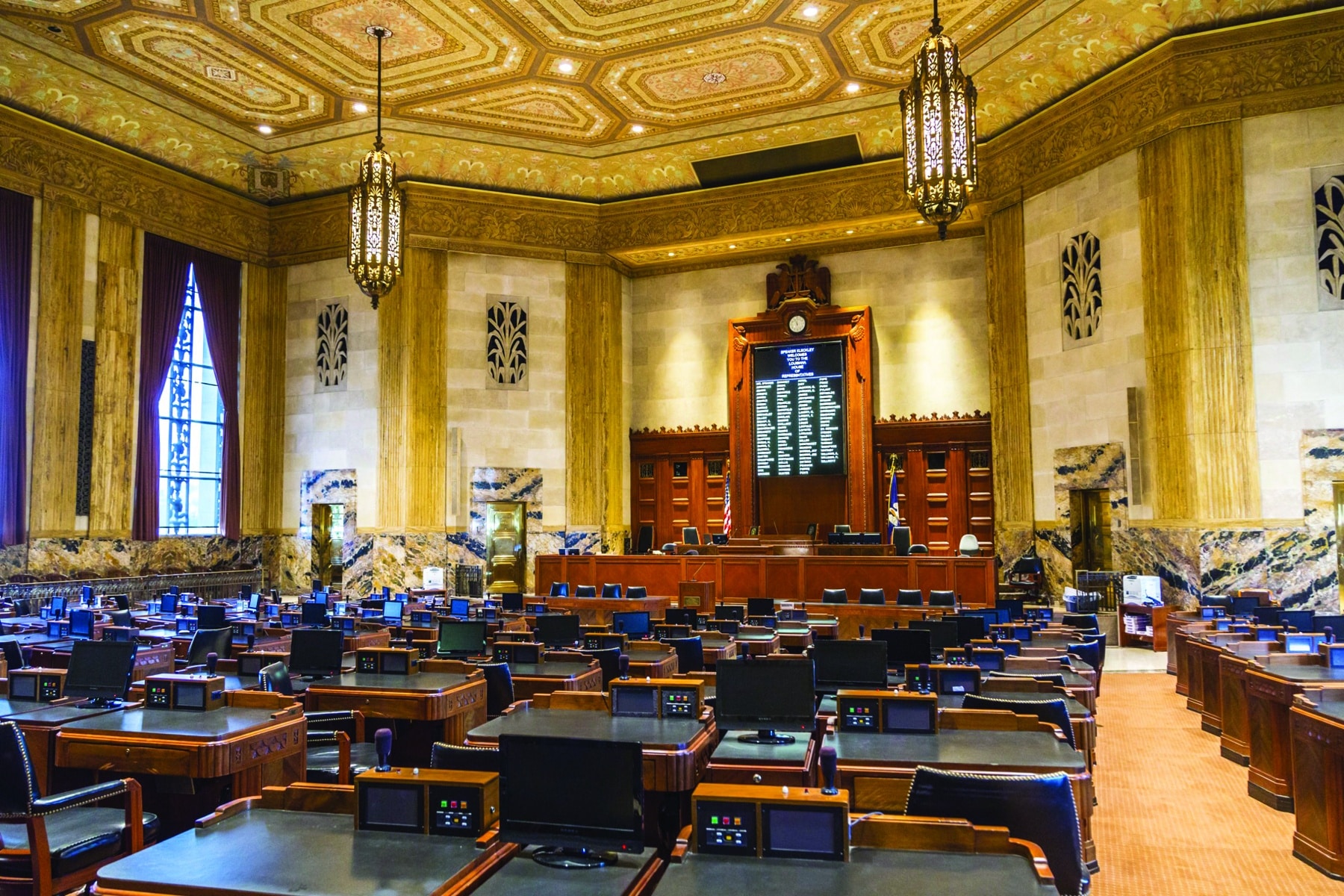 The 2022 legislative session came to an end on Monday, June 6. For Louisiana Baptists, it was a bittersweet session. Success in strengthening protections for the unborn and women’s sports, was off set by defeats to protect religious liberty, and oppose “medicinal” marijuana.

BATON ROUGE, La. (LBM)—Louisianan Christians and social conservatives can celebrate several sweet victories won during the 2022 Regular Session of the legislature, but several developments likely will leave a bitter taste.

Governor John Bel Edwards vetoed H.B. 953 which would have improved R.S. 13:5233, the state’s Preservation of Religious Freedom Act, by preventing the state from putting a greater burden on houses of worship than it enforces on any secular business, service, or assembly.

In a letter to House Speaker Clay Schexnayder, Edwards said that the bill “would go far beyond” the lawful protections of religious liberty deemed constitutional by the U.S. Supreme Court, adding that “a regulation would fail under this bill if it treats any business or entity differently than religious organizations, not just comparable entities. This would lead to unfair, and, in the case of emergencies, a potential danger to the public.”

Rep. Alan Seabaugh, a member of Broadmoor Baptist Church in Shreveport and the sponsor of the legislation, rejected the governor’s rationale, saying such logic had already been rejected by the Louisiana Supreme Court in a case that tested the principles of his bill.

“The people of Louisiana overwhelmingly want their churches protected from government intervention,” Seabaugh told the Baptist Message. “That is one of the reasons the bill passed both Houses of the legislature with 2/3 of the vote or more.

The bill garnered supermajority support in both the Senate (26-8-4) and the House (71-20-14), but it is not clear if such strong backing will translate into calls for a veto override session. Speaker Schexnayder (office, 225-342-8336) and Senate President Page Cortez (office, 225-342-9990) have not hinted whether such action is possible.

On the other hand, Edwards signed into law S.B. 342 and allowed S.B. 44 to become law without acting on it.

The first (S.B. 342), now known as Act 545, tightens up existing pro-life measures in anticipation of a favorable ruling by the U.S. Supreme Court in Dobbs v. Jackson Women’s Health Organization, which would trigger a Louisiana law which bans abortions in the state. Rep. Julie Emerson, a member of First Baptist Church, Lafayette, championed the bill on the House floor and offered compelling testimony in favor of it, while articulately defending it against eight attempts to negatively amend it.

The second (S.B. 44), known as the Fairness in Women’s Sports Act, which prohibits biological males from competing as females on teams designated for girls or women, won overwhelming support last year, but was vetoed by Gov. Edwards. In a specially called 2021 veto override session, it fell two votes short of a needed supermajority. This year the House approved the measure 72-21-12 and the Senate, likewise, 29-6-3 — both were supermajority totals needed to override a second potential veto by the governor.

However, Edwards allowed the bill to become law as Act 283 without his signature (allowing him to avoid another veto showdown).

Last year and in 2022, the legislation was championed by Sen. Beth Mizell, a member of First Baptist Church, Franklinton, and the Senate President Pro Tempore.

Another bill could have triggered a call for an override session, if it had been vetoed. However, S.B. 388 has been signed into law as Act 548. This law was carefully drafted to prevent an end run by Planned Parenthood and other pro-abortion groups around a potential ban on abortions in the state (depending on the U.S. Supreme Court decision on Dobbs v. Jackson) by outlawing the purchase of abortifacients (abortion-inducing chemicals) via mail.

Edmonds authored H.B. 274, which Gov. Edwards signed into law as Act 456, that expands adoption awareness instruction in high schools to include the benefits of adoption to society; types of adoption available; difference between foster care and infant adoption; reasons adoption is preferable to abortion; public and private resources and agencies available to assist in the adoption process; statistical data on abortion, adoption, and childbirth; and public and private resources available for pregnant mothers and parents.

Gov. Edwards also signed into law as Act 386, a significant bill, H.B. 402, authored by Rep. Jason Hughes (a member of Franklin Avenue Baptist Church, New Orleans), which provides additional remedy for children who are abuse victims. The heart of the measure adds three years to the statute of limitations to file legal “action against a person for sexual abuse of a minor, or for physical abuse of a minor resulting in permanent impairment or permanent physical injury or scarring …” regarding “the physical, mental, or emotional health and safety of the child.”

Rep. Raymond Crews (First, Bossier City) was unwavering in his opposition of H.B. 605, which appeared to target Christian counsellors because it would have banned “any practice or treatment … intended to change the person’s sexual orientation or gender identity, including efforts to change behaviors or gender expressions, or to eliminate or reduce sexual or romantic attractions or feelings toward individuals of the same sex or gender.”

Crews strongly challenged the fact that the bill did not ban anyone from trying to convert children to identify as LGBT or prevent anyone from causing children to question their natural biological sex. He also adamantly opposed a clause in the bill that negated parental consent.

With no end to the withering scrutiny from Crews and others, including witnesses against the bill, the sponsor withdrew H.B. 605 from consideration by the House Health and Welfare Committee.

Rep. Seabaugh was equally steadfast against H.B. 506, a measure that originated with the LSU Law Institute, which is tasked, in part, to harmonize legislation. Proponents presented the bill as not making “substantive changes,” claiming it merely ensured “consistency between the Domestic Abuse Assistance Act in Title 46 and the Domestic Abuse Assistance Act in the Children’s Code.” However, the bill deleted a major protection for minors against “coercive abortions.” Seabaugh demanded the clause not be deleted from the Children’s Code but instead be added to Title 46 to ensure consistency between the two laws. In the end the House Committee on Civil Law and Procedure killed the bill.

Unfortunately, lawmakers passed legislation, H.B 135 and H.B 137, that expanded pot smoking in the state, despite testimony that Colorado is backpedaling (because of skyrocketing health hazards to children) after legalizing recreational and medical marijuana. Concerns also were expressed about the measures’ likely negative impacts on Louisiana high school students (who already lead the nation in alcohol abuse, #1, and injecting illegal drugs , #1, and were ranked only #14 in pot smoking, but that was before “medicinal” pot smoking became legal in the state at the beginning of this year).

Despite a direct plea from the Louisiana Baptist Office of Public Policy, Gov. Edwards signed both bills into laws as Acts 438 and 439, respectively, bringing Louisiana closer to becoming a destination state for pot smoking.

Louisiana Baptist lawmakers heavily shaped the legislative agenda in 2022, filing at least 248 bills — and offering 112 resolutions of various types that were filed with the Office of the Secretary of State. Overall, 93 of the bills were enacted as law, six were vetoed, and 40 await a decision by the governor.

The remainder did not make it through the legislative process.