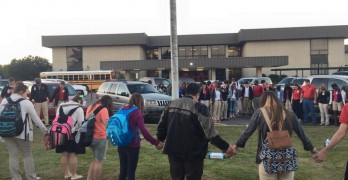 By Message Staff Louisiana Baptist students turned out Wednesday on their campuses to pray for their family, friends, nation and school during the annual See You At The Pole. Nearly 250 students turned out at North DeSoto Middle School in Stonewall to sing, hear a short message on Acts 1:14 and pray. Jacob Ambrose, minister of local ministry evangelism at Summer Grove Baptist Church in Shreveport, led worship and several students from the school led prayers. "God is doing some amazing things in our schools and in our community," said Zachary Almarode, youth pastor at Salem Baptist Church in Stonewall. "I was extremely ecstatic. To see that many students show up early to school to pray gives me chill bumps.  What an encouragement. The next great revival in this nation will come from this generation." Turnout also was high at Alexandria Senior High School. Billy Lonsberry, lead student minister at Calvary Baptist Church in Alexandria, was excited to see so many young people show up early to school for prayer. "These kids did an amazing job leading their peers this morning in prayer asking God to move in the hearts of students, their administration, their school board, our city officials, law enforcement, fire & … END_OF_DOCUMENT_TOKEN_TO_BE_REPLACED

By John Kyle, Louisiana Baptists Communications Director Church planting, compassion ministries, missions education and other missions-related endeavors are what typically come to mind when one thinks of state missions. In Louisiana, you can add multi-media outreach to the list. Here for You is a multi-media evangelism strategy for local churches that has become a significant part of Louisiana Baptists state missions efforts. Launched in southwest Louisiana in the summer of 2014, Here for You is a multi-platform media strategy designed to give every person in Louisiana the opportunity to say “yes” to a relationship with Jesus. According to Louisiana Baptists Communication Director John Kyle, the basis for Here for You comes from a parable of Jesus. “In Luke 14, Jesus tells a parable that includes the admonition to ‘go into the highways and hedges and compel them to come in.’” Kyle said. “What does this look like in 2015 and beyond? How can we get inside people’s smart phones, tablets, TV’s and other communication platforms?” Since July 2014 the spots have aired over 7,800 times on broadcast and cable outlets in southwest and northeast Louisiana. They have generated more than 135,000 online views via the splash … END_OF_DOCUMENT_TOKEN_TO_BE_REPLACED 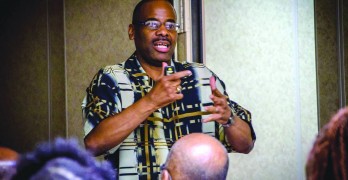 By Marilyn Stewart, Regional Reporter NEW ORLEANS – When it comes to international missions, the African American community may be “a sleeping giant,” said Keith Jefferson, IMB African American missional church strategist, at a recent IMB Forum at Franklin Avenue Baptist Church, New Orleans. The event highlighted that the time is now and the opportunity great for African American churches to invest in international missions. While a lack of missions education and exposure has been a damper to African American participation in the past, the tide is changing. “[Awareness] is beginning to grow,” Jefferson said. Fred Luter, Jr., host pastor, told the group of mostly African American lay persons and pastors that he participated in his first international mission trip – to Africa –  while president of the Southern Baptist Convention. Luter served as president from 2012-14. Stories from IMB leaders of Africans that asked, “Where are the people who look like us?” convicted him, Luter said. “I was bitten by the bug of foreign missions,” Luter said. He added later, “Once you go, you always want to go back.” Featured speakers included Tony Mathews, senior pastor of North Garland Baptist Fellowship, Garland, Texas and … END_OF_DOCUMENT_TOKEN_TO_BE_REPLACED 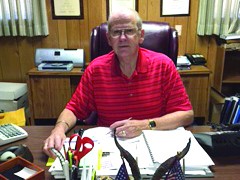 By Brian Blackwell, Message Staff Writer WINNSBORO – In his 50 years of ministry, James Carson has pastored Baptist churches in Texas and Louisiana for 37 years. But it’s the last 13 years as director of missions for the Tri-Association that have given Carson one of the greatest joys and fulfillments of his ministerial career. “What a privilege and blessing it has been to meet so many wonderful people and to work with some of the finest pastors of our churches,” Carson said. “I still believe these three associations are the finest in the Louisiana Baptist Convention.” After serving the churches in Caldwell, Deer Creek and Richland Baptist Associations since Feb. 1, 2002, Carson has felt led to retire from his position on Sept. 30. The reason, Carson said, is because after much prayer and thought he felt led by the Lord that now is the right time. “I have been blessed beyond measure to have made lifelong relationships with so many people through these last 50 years of ministry,” he said. To honor his time of service as director of missions, a reception is scheduled for Sept. 27 from 2 to 4 pm at the Temple Baptist Church Family Life Center in Winnsboro. Keith Dowden, pastor of South Central Baptist Church in … END_OF_DOCUMENT_TOKEN_TO_BE_REPLACED 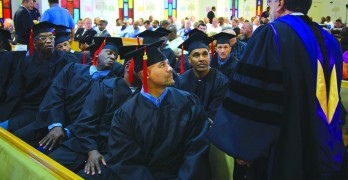 By Marilyn Stewart, Regional Reporter ANGOLA – Celebrating a 20-year partnership that has changed lives and deployed “missionaries,” New Orleans Baptist Theological Seminary/Leavell College recently dedicated a new facility with expanded classroom and library space at Louisiana State Penitentiary, Angola. The Aug. 27 dedication followed a graduation ceremony marking the program’s 278th graduate. “This has been the most spectacular day we could ever have,” said Warden Burl Cain. “We have a new seminary building; we doubled our capacity; and, it means less victims of violent crime.” The Joan Horner Center, an 11,000 square foot building with a computer lab, two classrooms, an auditorium and library, was named in memory of benefactor Joan Horner, founder of Premier Designs of Dallas, who with husband Andy Horner were long-time supporters of the Angola ministry. An anonymous donor provided funds for the structure. James LeBlanc, secretary of the Louisiana Department of Corrections, echoed Cain’s correlation between the program’s success and a state-wide drop in repeat offenders, crediting as a factor the work of 35 NOBTS “missionaries,” graduates who asked to transfer to other Louisiana prisons in order to plant new … END_OF_DOCUMENT_TOKEN_TO_BE_REPLACED

By Brian Blackwell, Message Staff Writer PINEVILLE – Curtis Zackery’s message on how to change one’s community, campus and world was simple yet urgent for the youth, college students and others attending the recent revival at Louisiana College. Focus on Jesus. Every single person, every single day needs to be reminded of the cross of Christ,” Zackery said. “Because it either tells us the story of what we can be rescued from or it tells us the story of what we have been rescued from. And when both of us realize what we’ve been rescued from, the one who is the rescuer becomes our focus. And when He becomes our focus, He begins to change things.” Zackery was one of three guest speakers for the three-day annual revival inside LC’s Guinn Auditorium. Sammy Tippit, a global evangelist with Sammy Tippit Ministries, preached the first day’s message and Lee Howell, founder of Awaken Men Ministries and director of St. George Island Christian Retreat Center, preached on the second day of the revival. Zion Hill Church, the Louisiana College Chapel band and Philadelphia Baptist Church provided music and worship for each of the sessions. Students gathered at the altar throughout the revival, coming forward to pray for a variety … END_OF_DOCUMENT_TOKEN_TO_BE_REPLACED 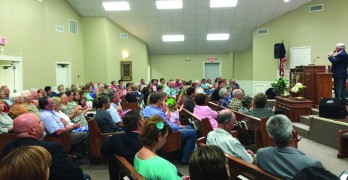 By Brian Blackwell, Message Staff Writer GILBERT – A fire in late 2013 may have destroyed the sanctuary of Turkey Creek Baptist Church but could not break apart the spirit of the congregation in the midst of rebuilding the structure 19 months later. The fire happened in the early morning hours of Dec. 4, 2013. Though no one was injured, the incident left the congregation without a place to worship. Kyle Spinks, who became pastor of the congregation in July 2013, said that’s when his congregation began to rise to the occasion. “Just about every help you could think of, from prayers and phone calls to monetary donations, we received,” Spinks said. “We are thankful for the prayers and support. During all this process our prayer has been God would shine through us and our adversity. And we did that the best we can. “I told our congregation that when my family and I moved out here, we prayed for the fires of revival,” he continued. “They just came in a different way.” With the absence of a sanctuary the congregation had known as home for more than 90 years brought a few blessings. While they were without a sanctuary, the congregation met in a church member’s home. Attendance fluctuated between 30 and 60 people … END_OF_DOCUMENT_TOKEN_TO_BE_REPLACED

By Kathy Hegwood Overturf, Louisiana College Alumni Director PINEVILLE – Louisiana College’s 2015 Homecoming Celebration kicks off Oct. 1 at a chapel service in Guinn Auditorium honoring this year’s class of distinguished alumni, which is a diverse group of individuals from the fields of business, education and full-time ministry. Don Hill (64), a former student body president; Becky Brown (76), a member of the first women’s basketball team, the Wildcat mascot and the 1976 homecoming queen, and Dr. Gretchen Lower Hanson (81) are the three alumni who will be honored. After graduating from LC, Hill, a businessman from Dallas, Texas, received  a Masters in Statistics from Florida State University. He went on to have a successful career in the financial industry. He was instrumental in creating the first Credit Reporting Resources Guide. He is also one of ten people who established Salt Grass Steakhouse and later Lupe’s Tortilla, two very successful restaurant chains. He and his wife Terry have been married since 1967 and they have one daughter. Upon graduation, Brown, who is from Richland, Miss., received graduate degrees from Northwestern State University in Natchitoches and New Orleans Baptist Theological Seminary, … END_OF_DOCUMENT_TOKEN_TO_BE_REPLACED 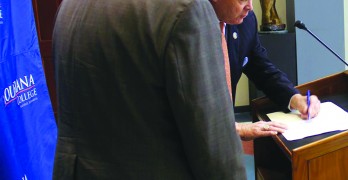 By Staff, Baptist Message PINEVILLE – Louisiana College students soon will have the opportunity to earn not one but two degrees. LC President Rick Brewer and Louisiana Tech President Leslie Guice on Sept. 15 signed a memorandum of understanding that allows for a 3+2 degree program partnership. Students at LC will earn a bachelor’s degree in pre-engineering in three years and then go to Louisiana Tech to earn an engineering degree in two more years. This new program allows for graduates to be more marketable in a changing world, contends Brewer. “I firmly believe that in the 21st century, success in the community will come through efforts of collaboration,” Brewer said in the press conference. “Programs like this 3+2 model will make graduates from LC and Louisiana Tech more marketable, and probably give them a good shot at grad school.” Guice called the partnership a great match, nothing that the agreement between the two institutions is both unique and historical. “The family spirit is very important on our campus,” he said. “We have a very positive culture on our campus that I think supports student learning.” “We are larger but it will be a nice transition opportunity for students that want to get some part … END_OF_DOCUMENT_TOKEN_TO_BE_REPLACED 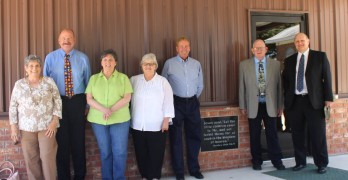 By Message Staff DOYLINE – Making a commitment to its future, First Baptist Church of Doyline dedicated a new children’s building Sept. 13. The congregation broke ground in March, two years after focusing on a week of prayer about the possibility of a new children’s building. The church set goals they met along the way and by the time of the dedication and ribbon cutting, the building was finished debt-free. Long-range planning committee chairman Larry Dean said. “We felt like the children are the future of the church,” Dean said. “If we don’t provide a place for the kids, we won’t have a church.” The new 40 ft by 100 ft building was constructed at a cost of $400,000. It includes a foyer, nursery, classroom space, an assembly room, bathrooms and kitchenette. Of the 80 who attend church services on Sunday morning, 20 are children. Dean is optimistic about what the future holds. “We want to give God all the glory,” Dean said. “We couldn’t have done it without God.” … END_OF_DOCUMENT_TOKEN_TO_BE_REPLACED