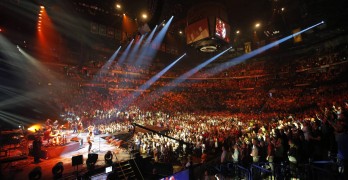 By Joe Conway, North American Mission Board NASHVILLE (BP) - A sold-out crowd of more than 13,000 from all 50 states and four Canadian provinces flooded into Nashville's Bridgestone Arena to celebrate the call of Jesus and the response of life on mission at the 2015 Send North America Conference Monday. North American Mission Board President Kevin Ezell and International Mission Board President David Platt welcomed the assembly and challenged attendees to serve wherever God calls them. "This is where I want to call 13,000 plus people in this arena, from the beginning &#91;of the conference&#93;, to put a blank check of our lives on the table for God -- no strings attached," Platt said. Ezell noted, "We need pastors, students, men and women to rise up. We want this to be more than a conference you attend, we want it to be a life-altering experience." The mission entity leaders were joined on the platform by Southern Baptist Convention president Ronnie Floyd, Tennessee Baptist Convention executive director Randy Davis and others who helped lead prayer. Opening session keynote speaker J.D. Greear told attendees they have a call to leverage their talents and lives for the Great Commission. "True growth … END_OF_DOCUMENT_TOKEN_TO_BE_REPLACED

By Diana Chandler, Baptist Press LAS CRUCES, N.M. (BP) - Small bombs exploded within minutes of each other Aug. 2 at two Las Cruces, N.M., churches - including a Southern Baptist congregation - cancelling Sunday morning services and necessitating evacuations at other churches across the city. No one was hurt in the explosions that caused minimal damage at Calvary Baptist Church, 1800 S. Locust St., and Holy Cross Catholic Church, 1327 N. Miranda St., the Associated Press reported. No arrests had been made as of today, Aug. 3, but New Mexico state police described the bombs as improvised explosive devices, IEDs, designed to cause harm. About 50 worshippers had already gathered for the 8:30 a.m. traditional service at Calvary Baptist Church when the bomb exploded at 8:20 a.m. in a mailbox attached to the building, Scott Rodgers, pastor of core groups, told Baptist Press. Worshippers remained calm as police arrived and evacuated Calvary Baptist, ushering individuals to the church's south parking lot, Rodgers said. He preached the Sunday morning service in the parking lot, as youth arts pastor Gregg Higgins led music. But the 9:45 a.m. and 11 a.m. services were cancelled, as police blocked adjacent streets while … END_OF_DOCUMENT_TOKEN_TO_BE_REPLACED

NASHVILLE (BP) -- The Boy Scouts of America's executive board has voted to lift the Scouts' national ban on gay adult leaders and employees -- a move Southern Baptist Convention President Ronnie Floyd said may hasten the exodus of Southern Baptists from Scouting. "Sadly and regrettably, I believe churches who stand on the biblical ethic of sexuality will have to cease their sponsorship and involvement in the Boy Scouts of America," Floyd told Baptist Press in written comments. "I also believe it is important that everyone understands that in reality, it is the Boy Scouts of America that is walking away from their historic heritage that has been embraced by the vast majority of Americans." The BSA executive board approved the policy change, which is effective immediately, by a 79-percent majority, the Scouts' website reported. The vote occurred during a July 27 conference call. The BSA will continue to allow troops chartered by religious organizations to exclude gays from volunteer leadership positions if homosexual behavior is incompatible with chartering organizations' religious beliefs. One Baptist leader told The Washington Post that concession may only be temporary, and churches could be forced eventually to accept … END_OF_DOCUMENT_TOKEN_TO_BE_REPLACED 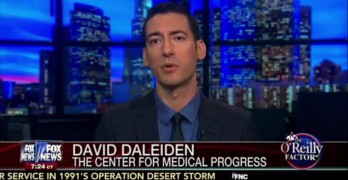 ASHEVILLE, N.C. (BP) -- A 26-year-old activist with a video camera has moved to the forefront of cultural challengers to the nation's largest abortion provider. David Daleiden and his group Center for Medical Progress are in the process of releasing a much-publicized series of videos he says show Planned Parenthood Federation of America (PPFA) senior executives involved in selling baby body parts. The first video, released July 14, showed PPFA Senior Director of Medical Services Dr. Deborah Nucatola admitting to using partial-birth abortions to get intact body parts to sell. Daleiden released a second video July 21 showing another PPFA senior executive -- Dr. Mary Gatter, president of PPFA's Medical Directors' Council -- haggling over the price of body parts and offering to use abortion methods that will not destroy the parts -- what she called "less crunchy techniques." Questions of federal law surround both the sale of fetal tissue as well as abortions involving fetal tissue collection. How did Daleiden get these videos? "We conducted a 30-month-long investigative journalism project," he told WORLD News Service. Daleiden said he spent months networking and building relationships, noting, "You can't just walk in off … END_OF_DOCUMENT_TOKEN_TO_BE_REPLACED

By Gregory Tomlin Christian Examiner ORLANDO, Fla. – Trail Life USA, the organization founded as an alternative to the Boy Scouts of America after that organization voted to accept gay scouts in 2013 has issued a warning to churches in advance of the BSA's formal vote next Monday to accept gay adult leaders. The warning, in the form of a lengthy legal memorandum describing the legal challenges that will face churches enforcing a conservative Christian membership policy, was sent in an email to Trail Life USA supporters July 23. It was also posted to the group's website. In a note accompanying the memorandum, the organization's CEO Mark Hancock said his organization's board, staff and members have "no desire to dishonor the tremendous legacy of the Boy Scouts of America." "However, our love for God's church and our concern for the welfare of boys compels us to release the following statement and accompanying position paper," Hancock said. The statement Hancock referenced included comment from John Stemberger, Trail Life's chairman of the board and an attorney in Orlando, Fla. Stemberger was instrumental in founding the BSA alternative. He said the organization was greatly saddened by the BSA's resolution, which will be the … END_OF_DOCUMENT_TOKEN_TO_BE_REPLACED

By Bonnie Pritchett, Southern Baptist Texan HOUSTON (BP) -- The Texas Supreme Court has directed the Houston's city council to abide by its own charter and repeal the controversial Equal Rights Ordinance or put it up to a city-wide vote this November. The city has until Aug. 24 to comply or be compelled to do so by the high court. In a rare move, the Texas Supreme Court conditionally granted a writ of mandamus stating "the legislative power reserved to the people of Houston is not being honored." Last year, Mayor Annise Parker and then-City Attorney Dave Feldman declared "invalid" a referendum to repeal the controversial city ordinance. Petitioners -- a racially and politically diverse group of pastors and civic leaders -- sued, alleging the mayor and attorney manufactured signature requirements in order to defy the city charter mandates. The court agreed with the petitioners July 24, stating the city secretary, not the city council, is obligated to evaluate petitions. Enforcement of the ordinance is suspended. "Simply put, the City Secretary's certification started the process outlined in the Charter for reconsidering ordinances following a referendum petition, invoking the Council's ministerial duty to carry out its … END_OF_DOCUMENT_TOKEN_TO_BE_REPLACED 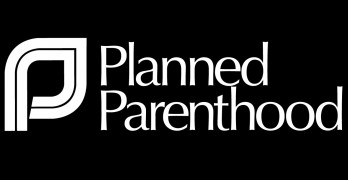 By David Roach, Baptist Press NASHVILLE (BP) – A second undercover video released July 21 by the Center for Medical Progress appears to show a Planned Parenthood doctor negotiating the price of baby parts obtained through abortion and discussing the possibility of varying abortion procedures to harvest intact organs. At one point in the video, a woman identified as Mary Gatter, former president of the Planned Parenthood Medical Directors’ Council, speaks of using “a less crunchy technique” of aborting babies to preserve “more whole specimens.” She also jokes, “I want a Lamborghini,” when negotiating the price of baby parts, though she also says, “We’re not in it for the money” and “we don’t want to be in a position of being accused of selling tissue.” Gatter appears to settle on a price of $100 per “specimen” but says she wants to investigate what other abortion providers are receiving. The video includes text stating it was shot Feb. 6 by investigators posing as a fetal tissue procurement company. David Daleiden, senior investigator for the Center for Medical Progress, told LifeSiteNews CMP’s latest video suggests Planned Parenthood violated federal laws that prohibit profiting from the sale of human remains and altering … END_OF_DOCUMENT_TOKEN_TO_BE_REPLACED 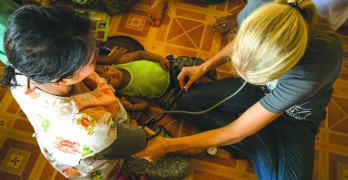 By Mark Kelly, Baptist Press RICHMOND, Va. — All over the world, International Mission Board’s health care missionaries are living out “word and deed” Christian faith, and people are responding with decisions to follow Jesus — some of them in places where the good news of God’s love is only just now arriving. During the Global Medical Alliance meeting June 1-5 near Richmond, Va., a steady stream of reports illustrated the wide variety of ways Southern Baptists merge proclamation of the gospel with demonstration of God’s love for suffering people: n In West Africa, as the Ebola epidemic exploded, IMB workers focused on raising awareness and teaching prevention techniques in Liberia, Togo and Mali. About 424,000 people were reached through a combination of fliers, TV spots, speakers, hand-washing stations, music concerts and food distributions. Thousands heard the good news and more than 200 professed faith in Christ. n In South Asia, a Vacation Bible School offering from First Baptist Church of Lafayette, purchased health and hygiene items that could be shared with terminally ill patients, along with health lessons and Bible stories. The distribution gave believers access to communities where they had been unwelcome before, … END_OF_DOCUMENT_TOKEN_TO_BE_REPLACED

By Roy Hayhurst, GuideStone Financial Resources DALLAS (BP) -- GuideStone Financial Resources has filed an appeal to the U.S. Supreme Court against the government's contraceptive mandate that will require certain ministries served by GuideStone to provide abortion-causing drugs and devices in their employer health plans or risk crippling fines. GuideStone, along with churches and integrated auxiliaries of churches, are exempt from the mandate and not at risk of penalties. For certain religious employers other than churches and their integrated auxiliaries, however, the government has argued that it offers an "accommodation" to religious employers who object to the mandate. Harold R. Loftin Jr., GuideStone general counsel, said the Southern Baptist entity "has, from the filing of our case, objected to the so-called 'accommodation' because the government is attempting to rewrite the terms of GuideStone's plan" to use the plan "to provide access to drugs and devices GuideStone believes to be impermissible. In addition, the government's regulations attempt to require certain of GuideStone's religious employers to take actions that facilitate the delivery of abortion-inducing drugs and devices to our participants and their … END_OF_DOCUMENT_TOKEN_TO_BE_REPLACED