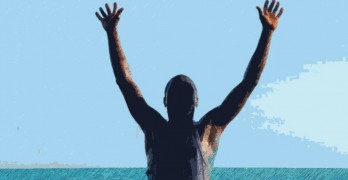 By Brian Blackwell, Message Staff Writer ALEXANDRIA – The Every People Group Task Force met recently, continuing charting a plan on how Louisiana Baptists can reach those of various ethnicities in the state. James Jenkins, church planting director for Louisiana Baptists, said the charge of the task force is three-fold: ● Evaluate the ethnic diversity in Louisiana and its implications for Louisiana Baptists, ● Create avenues for input and involvement in LBC life by non-Anglo leaders and congregations, ● Lead Louisiana Baptists in effective engagement with ministry among all people groups in the state. The task force was appointed as a result of the President’s 2020 Commission, which was affirmed by messengers during the 2013 LBC Annual Meeting in Alexandria. The President’s 2020 Commission report was crafted collaboratively by 400 Louisiana Baptist pastors, leaders, staff members and laypeople working in 20 subcommittees of 20 members each. Ten “key actions in reaching our state” – known as KAIROS – were developed to engage two audiences – the next generation and every people group. As the first step in carrying out its charge, the Every People Group Task Force agreed to outline a missiology for the work … END_OF_DOCUMENT_TOKEN_TO_BE_REPLACED 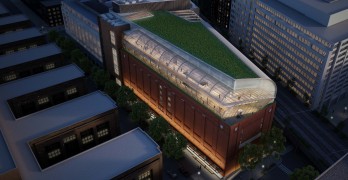 WASHINGTON, D.C. – Amid snow flurries in the nation’s capital, construction on the world’s first museum devoted solely to the Bible began in February as demolition began on the site near Capitol Hill. “It’s an exciting day for us,” said Steve Green, president of the craft store chain Hobby Lobby, who birthed the idea for the museum. “It’s been a dream, and it’s becoming a reality.” The Museum of the Bible is a $400 million project scheduled for completion in 2017 and will feature the Green Collection, one of the world’s largest private compilations of biblical texts and artifacts. … END_OF_DOCUMENT_TOKEN_TO_BE_REPLACED 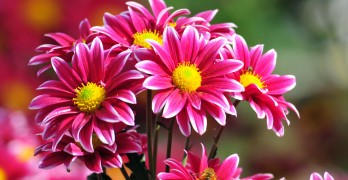 OLYMPIA, Wash. – A Washington state judge ruled in February that a Christian flower shop owner is required under state law to provide full services for same-sex wedding ceremonies, even though it violates her faith. Barronelle Stutzman sold flowers to gay couple Robert Ingersoll and Curt Freed for more than nine years, and considered Ingersoll a friend. But when he asked her to create the flower arrangements for the couple’s wedding in 2013, the great-grandmother said she couldn’t because of her “relationship with Jesus Christ.” She referred them to another business for assistance. The Washington state attorney sued Stutzman for allegedly violating the Washington Law Against Discrimination and its Consumer Protection Act. Ingersoll and Freed soon filed their own lawsuit against Stutzman. The ruling settles both suits by summary judgment in the plaintiffs’ favor, preventing the case from proceeding to trial.  Voters in Washington legalized same-sex marriage on Nov. 6, 2012. … END_OF_DOCUMENT_TOKEN_TO_BE_REPLACED 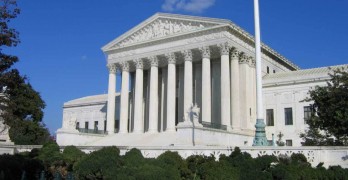 MONTGOMERY, Ala. –  The Alabama Supreme Court has ordered a halt to same-sex marriage licenses in the state, posing a direct challenge to a federal court in Mobile that overturned the state’s marriage laws. The Alabama court, in a March 3 decision, stated: “As it has done for approximately two centuries, Alabama law allows for ‘marriage’ between only one man and one woman. Alabama probate judges have a ministerial duty not to issue any marriage license contrary to this law. Nothing in the United States Constitution alters or overrides this duty.” This fact, the court stated, “does not change simply because the new definition of marriage has gained ascendancy in certain quarters of the country, even if one of those quarters is the federal judiciary.” The court issued its opinion as one body, called “per curiam,” rather than identifying the judges who drafted the 148-page ruling regarding probate judges who are the state officials responsible for issuing marriage licenses. The religious liberty firm Liberty Counsel, which filed a lawsuit on behalf of state moral concerns organizations ALCAP and the Alabama Policy Institute and a county probate judge, said it was a 7-1 ruling by the nine-member court, with one … END_OF_DOCUMENT_TOKEN_TO_BE_REPLACED 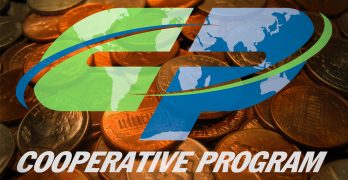 NASHVILLE (BP) – Year-to-date contributions to Southern Baptist Convention national and international missions and ministries received by the SBC Executive Committee are 4.81 percent above the year-to-date budgeted projection, and are 2.97 percent above contributions received during the same time frame last year, according to SBC Executive Committee President and CEO Frank S. Page. The total includes receipts from state conventions and fellowships, churches and individuals for distribution according to the 2014-15 SBC Cooperative Program Allocation Budget. As of Feb. 28, receipts totaled $82,098,104.34, or 104.81 percent of the $78,333,333.33 year-to-date budgeted amount to support SBC ministries globally and nationally. The total is $2,371,418.56 more than the $79,726,685.78 received through February 2014. The SBC-adopted budget is distributed 50.41 percent to international missions through IMB, 22.79 percent to North American missions through the North American Mission Board, 22.16 percent to theological education through the six SBC seminaries, 2.99 percent to the SBC operating budget, and 1.65 percent to the Ethics & Religious Liberty Commission. GuideStone Financial Resources and LifeWay Christian … END_OF_DOCUMENT_TOKEN_TO_BE_REPLACED 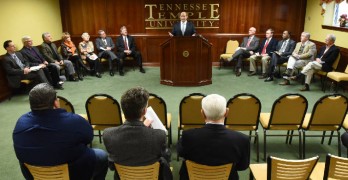 WINSTON-SALEM, N.C. -- The trustees of two Baptist colleges, Tennessee Temple University and Piedmont International University, voted unanimously to merge the institutions March 3. The announcement comes a day after The Chattanoogan (Chattanoogan.com) reported TTU would be closing its doors at the end of this semester. The merger will be finalized April 30, pending the approval of the Transnational Association of Colleges and Schools, which accredits both universities. Established only a year apart in the mid-1940s, the two universities share a common mission that dates back to their founders, Charles Stevens of PIU in Winston-Salem, N.C., and Lee Roberson of TTU in Chattanooga, Tenn. TTU online students can expect decreases in their tuition rates and a seamless transition, according to PIU officials. Online programs will be transferred in their entirety to PIU. Residential students who move to Winston-Salem will experience a drop in tuition, room and board of approximately twenty-five percent. Several TTU board members will join PIU’s board, and some of TTU’s faculty and staff will move to Winston-Salem. PIU’s president, Charles Petitt, said the merged schools will have far greater potential together than … END_OF_DOCUMENT_TOKEN_TO_BE_REPLACED

LBC & SBC News By Anne Harmon, Baptist Press HOUSTON (BP) – International Mission Board President David Platt proposed streamlining the mission agency’s strategy and structure – in keeping with his desire for IMB to exalt Christ and work more effectively toward accomplishing the Great Commission – during IMB’s Feb. 24-25 trustee meeting in Houston. Trustees unanimously voted to approve the plan. “We want to empower limitless missionary teams to make disciples and multiply churches among unreached people,” Platt said. “We need a strategy that doesn’t cap our number of missionaries merely based upon how much money we have.” Platt noted the IMB operated “in the red” last year, with the agency’s operating expenses exceeding income by nearly $21 million. “Right now our funnel is really small ... such that we’re turning people away,” Platt said. “And what I’m saying, what we know, is that we need to blow open this funnel and create as many pathways as possible for Christians and churches to get the Gospel to unreached people.” IMB must creatively consider how to leverage the avenues God has given for limitless men, women and families to join together on missionary teams to make disciples and multiply churches among unreached people … END_OF_DOCUMENT_TOKEN_TO_BE_REPLACED

LBC & SBC News By Tom Strode, Baptist Press NASHVILLE (BP) – Southern Baptists appear to be defying the prevalent notion that young adults are abandoning the American church – at least by one measurement. Attendance by younger generations reached a 10-year high at the Southern Baptist Convention’s 2014 meeting in Baltimore, according to an annual survey of attendees. The survey, conducted by the SBC Executive Committee, showed nearly one-fourth (24.68 percent) of attendees were younger than age 40. That surpassed by more than 4 percentage points the previous best for the age group, recorded in 2013. The 2014 survey also showed 10-year highs for SBC attendees who are under 45 (33.44 percent, a gain of more than 3 percent over the previous high in 2013) and under 35 (15.93 percent, again an increase of more than 3 percent over the earlier high, which came in 2012). Though not a scientific sampling, the dramatic upswing in younger-generation participation at the SBC annual meeting since 2005 – especially during the last three years – reinforces what he has “noticed anecdotally,” said Southern Baptist entity head Russell Moore. “The hand-wringers are wrong,” said Moore, president of the Ethics & Religious Liberty Commission. … END_OF_DOCUMENT_TOKEN_TO_BE_REPLACED 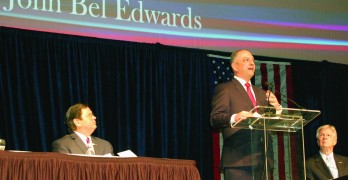 LBC & SBC News By Baptist Press HOUSTON (BP) – In a Feb. 13 verdict that left both sides claiming victory, a Houston jury handed down a decision in a lawsuit against the city and administrators for their dismissal of a petition by a coalition of pastors and civic leaders opposed to the city’s Equal Rights Ordinance. Though the jury – in a 10-2 verdict – found nearly 2,500 forgeries among the 54,000 voter signatures, they dismissed the city’s allegations of fraud. With no definitive winner revealed by the verdict, the decision will not be finalized until 152nd District Court Judge Robert Schaffer issues his judgment. Schaffer was out of town and did not preside over the reading of the verdict. Following the verdict lead defense attorney Geoffrey Harrison claimed the verdict as a win for the defense and Mayor Annise Parker, who championed the ordinance as a “personal” issue. Defendants in the lawsuit are Parker, former Houston City Attorney David Feldman, City Secretary Anna Russell and the City of Houston. “If the court’s ruling follows the jury’s verdict this will be a complete and total vindication for the city,” Harrison told reporters following the verdict. “And the petition, which we declared … END_OF_DOCUMENT_TOKEN_TO_BE_REPLACED

Editorial & Theological Thought By Jeff Iorg, President of Golden Gate Seminary MILL VALLEY, Calif. (BP) –Tucked within an otherwise humorous Super Bowl ad by T-Mobile was a supposedly comedic line when a woman handed a newborn to his mother, “Sorry, it’s a boy.” The line sounded like a thunderclap to me when I first heard it. The growing cultural bias against boys – really all traditional aspects of maleness – is pervasive, but usually communicated more subtly. This was a far more blatant statement than I anticipated in a Super Bowl commercial. Even if it was supposed to be a comedic line, it was “hostile humor” making a profound point about our culture’s rejecting of boys, men and masculinity. If you think I am overreacting, consider what would have happened if the woman would have said, “Sorry, it’s a girl.” Every feminist leader, including every elected official who caters to their lobby, would have been outraged. There would have been boycotts, calls for apologies and resignations, and pledges of sensitivity training for those responsible for the ad. The outcry would have been loud and long! This commercial stood in contrast to another Super Bowl ad about doing things “like a girl” – which of course … END_OF_DOCUMENT_TOKEN_TO_BE_REPLACED

By Jill Waggoner, ERLC WASHINGTON, D.C. (ERLC) - Richard Land served as the president of the Ethics & Religious Liberty Commission from 1988–2013. Prior to his time at the ERLC, he worked in a variety of church and political roles, many of which were involved closely with the modern pro-life movement in its … END_OF_DOCUMENT_TOKEN_TO_BE_REPLACED