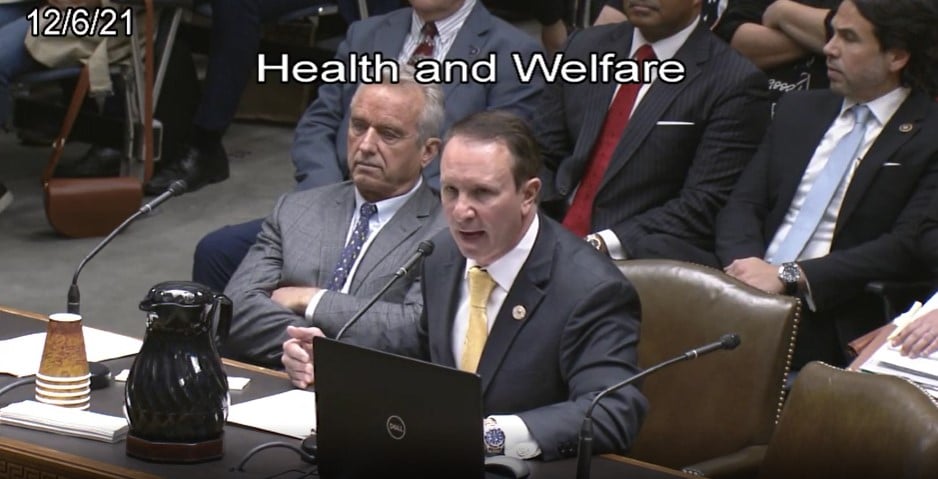 Robert F. Kennedy Jr. (L) and Louisiana Attorney General Jeff Landry spoke strongly against a proposal that would have added the COVID-19 vaccine to the list of required shots for students 16 and older in the state. Screenshot

BATON ROUGE, La. (LBM) – The Louisiana House Health and Welfare Committee, during a hearing Dec. 6, voted 13-2 against Gov. John Bel Edwards’ effort to mandate that students take the COVID-19 vaccine before being allowed to attend school.

Kennedy is founder and chairman of the Children’s Health Defense, which describes itself as dedicated to ending childhood health epidemics.

During the hearing, Attorney General Jeff Landry spoke strongly against the proposal that would have added the COVID-19 vaccine to the list of required shots for students 16 and older, declaring that the proposed requirement did not pass state constitutional muster.

“I’m asking you to take back the police powers of this state,” Landry said. “We cannot allow an executive branch to bypass the constitutional responsibilities of this legislature by allowing them to create policy and law using executive fiat. That is absolutely the job that you are charged with doing.”

Landry yielded some of his time to Kennedy, emphasizing that he is a Republican and Kennedy is a Democrat, but that the two men share a common concern that goes beyond political party lines.

“This critical issue before you today is not a red one or a blue one,” Landry said. “It’s not a conservative one. It’s not a liberal one. No, it’s an American issue because it speaks to freedom, liberty and the principles that all of us across this political spectrum can agree are of the utmost importance.”

Kennedy said Pfizer, whose vaccine has been approved by the U.S. Food and Drug Administration to include children between the ages of 5 and 11, cut short its clinical trial six months after it began. He said initially 22,000 people were given the vaccine while another 22,000 were given a placebo, but the latter group eventually received the actual vaccine — meaning there is now no control group to compare the effects which result in the vaccinated group.

He questioned the safety of the vaccine, citing Vaccine Adverse Event Reporting System data that reported 19,000 individuals died after taking the COVID-19 vaccine in the last eight months – and more than all other deaths from vaccines, combined, in the last 30 years. According to the VAERS website, it is “a national early warning system to detect possible safety problems in U.S. licensed vaccines” and it is co-managed by the Centers for Disease Control and Prevention and the U.S. Food and Drug Administration. This nationwide database “accepts and analyzes reports of adverse events (possible side effects) following vaccination.”

Kennedy also cited a John Hopkins study of 48,000 children under the age of 18 that found the mortality rate was zero among those children who were diagnosed with COVID-19 and had no pre-existing medical conditions.

Additionally, he expressed concern that children who receive the vaccine could develop myocarditis, an inflammation of the heart muscle. He said five individuals who were part of a group of 22,000 who received the Pfizer vaccine during its COVID-19 clinical trial died from myocarditis.

“What we are finding is the younger you are, the more likely you will get myocarditis which is what is killing people from heart attacks,” Kennedy said. “Fifty percent of the people who get myocarditis according to historical data will be dead or require a heart transplant within five years.”

He told committee members that the Pfizer vaccine is “experimental” and cautioned against giving school children such a shot.

“We need to stand up and make a moral choice and an ethical choice for our children,” he urged.

Kanter spoke strongly in support of Gov. Edwards’ initiative to add the COVID-19 vaccine to the Louisiana Department of Health schedule of vaccinations (which include shots against measles, mumps, rubella, tetanus, diphtheria among others), explaining that it would be required only for students 16 years and older, for now, and that parents would be able to opt out their children for medical, religious or philosophical exemptions afforded in Louisiana Revised Statute 17:170.

“We believe the loss of life endured throughout the 21 months of this pandemic, and particularly the loss of young life, has simply been untenable,” he said, adding his concern about the number of children who have been hospitalized and suffered severe symptoms.

He argued it is incorrect to suggest:

— COVID-19 does not impact children or adolescents, pointing out that for the last Delta surge “25 percent of new COVID-19 cases were in children.”

— COVID-19 vaccines “are experimental,” noting these have been granted “Emergency Use Authorization, a designation given after progression through Phase 1, 2 and 3 Trials in an effort to expedite usage when time is of the essence.”

— vaccines are “only worthwhile if they eradicate infections, offering that “eradication is a very, very high bar” and that “no vaccine is 100 percent, and the efficacy of the COVID-19 vaccine is on par with the other vaccines on the schedule.”

— vaccine-preventable diseases “require complete and absolute protection,” offering, again, that “no vaccine is 100 percent effective 100 percent of the time.”

— COVID-19 vaccines are substantively different from other vaccines,” claiming that no two vaccines are alike in those required in the Louisiana vaccination schedule and that these “truly run the gamut in terms of type, components, and frequency of doses or boosters needed.”

According to a report published by the American Academy of Pediatrics, two studies conducted by the CDC “found COVID-19 cases in children and adolescents have been increasing in number but not severity since the delta variant became predominant.”

In these studies, the CDC reported a surge in hospitalizations for children with about 1.4 of every 100,000 children and adolescents being admitted for COVID-19 (driven higher largely because 1.9 per 100,000 children under the age of 4 years were hospitalized with COVID-19).

In raw numbers, there have been 630 COVID-19-related deaths among children (0-17 years old) out of 790,000 COVID-19 deaths in the United States of all age groups, totaling 81 thousandths of one percent of the total.

LDH data show similar trends in terms of a low number of child deaths from COVID-19.

During the nearly two-year pandemic, 18 children (under the age of 18 years) have died from COVID-19 among the 14,873 total deaths from the disease. This translates to 12 hundredths of one percent of all the deaths from COVID-19 in the state.

Unfortunately, LDH does not track hospitalizations and ventilation cases by age, according to Lee Mendoza, director of the LDH Bureau of Informatics, in an email to the Baptist Message on a separate matter.

NOT THE LAST WORD

The defeat was welcomed by a packed committee room and two overflow rooms, all filled with mothers wearing red to reflect a desire to “stop” the proposal.

However, Gov. John Bel Edwards, a Democrat, indicated, Dec. 3, his intention to move forward with the vaccination mandate despite the committee vote and strong opposition from Louisiana mothers.

“I just think it’s really, really important to embrace the science and really it’s also important to not engage in misinformation,” Edwards said. “Absent some compelling reason, which I at present have not seen, I fully expect that we will be adding the vaccine to the schedule,” theadvocate.com reported.

Additionally, the governor’s spokesperson Christina Stephens released a statement following the Dec. 6 vote, noting that Edwards “supports adding the safe and effective COVID-19 vaccine to the immunization schedule and, barring a recommendation from public health experts, his opinion would not change.”

By Will Hall, Baptist Message executive editor ALEXANDRIA, La. (LBM) —“Nobody cares what’s happening to the Uyghurs, okay? You bring it up because you really care, and I think that’s nice that you care. The rest of us don’t care.” This appalling statement was made by Silicon Valley billionaire Chamath … END_OF_DOCUMENT_TOKEN_TO_BE_REPLACED