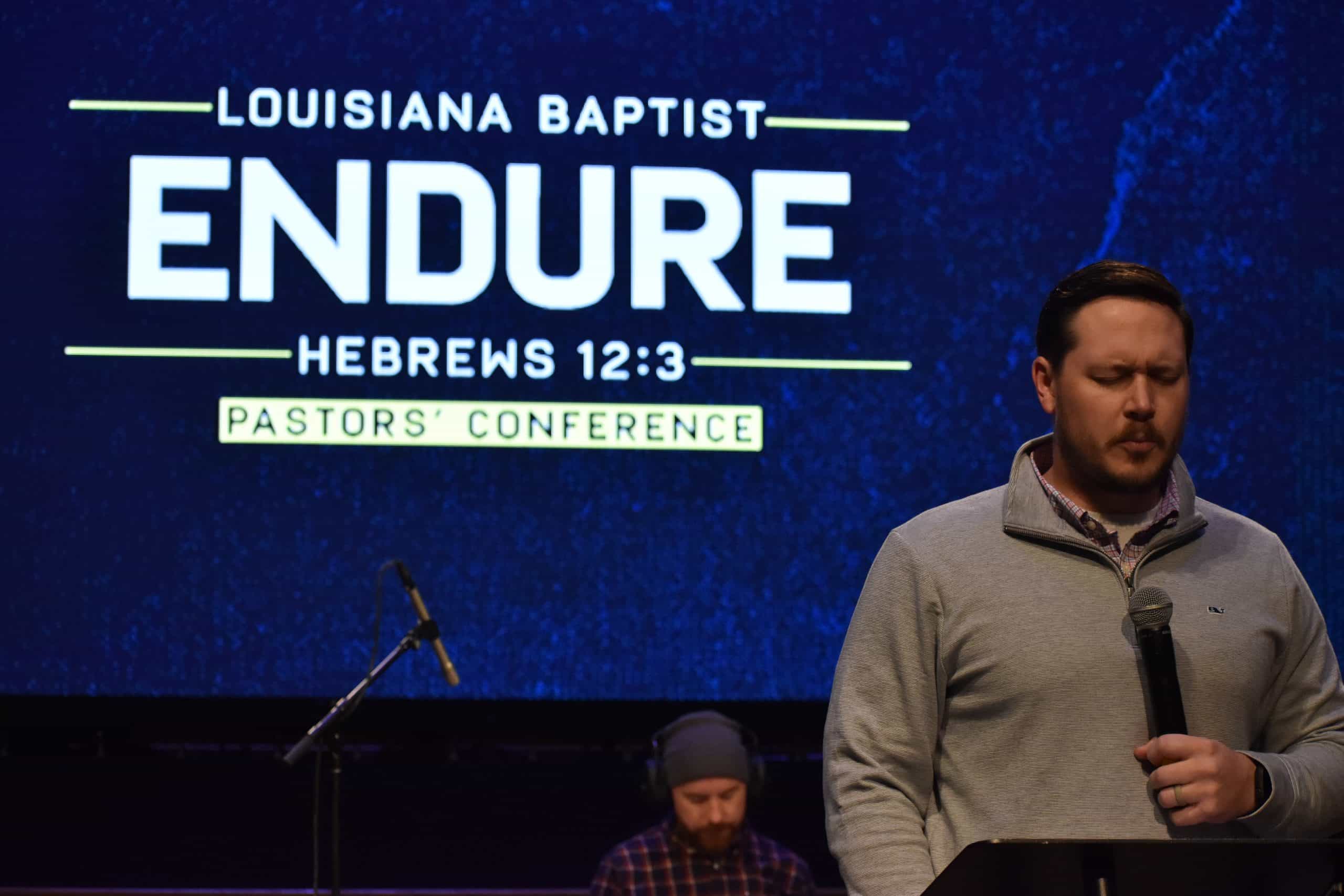 Todd Strain, pastor of Calvary Baptist Church, Alexandria, spoke during the opening session from 1 Corinthians 1:13-17, 15:1-6 and 2:1-2 to urge the crowd to endure for the Gospel.

Ministry at times is difficult and pastors may be tempted to drift away and pursue other things, Strain said. However, the cross provides the fuel to endure to the end.

He further shared how pastors can influence others to experience the power of the cross through the delivery of their message, content of their message and how they live their personal life.

“A lot of times you step in mud holes because ministry is messy,” Strain said. “But what is going to keep you going to the end?  The Gospel is going to keep us going each and every day; that Christ died for our sins, He was buried and raised, and He gives us power. That Gospel is enough.”

Vince Smith, pastor of the Circle Church, Alexandria, encouraged the pastors to endure groaning they might experience during ministry. Preaching from Hebrews 13:17-21, Smith said pastors must be transparent, pray and trust in the Good Shepherd.

He encouraged pastors to seek an accountability partner who is more seasoned in ministry and can pour into them.

“Somebody needs to have access to you, somebody who can call you out on your mess, somebody that God speaks to on behalf of you,” Smith said. “There are a lot of Timothys that have never had Pauls. You need one.”

Smith said pastors also should rely on the Great Shepherd, who equips them through the difficulties of ministry.

“The Great Shepherd of the sheep is leading us on the walk and He’s going to equip you with everything that you need,” he said. “The Shepherd has everything you need that will heal that groan that you’ve got.”

He pointed to Joseph, the patriarch of Israel, who experienced many difficulties including time in prison for an evil act he did not commit. But, in the end, God rewarded Joseph for his faithfulness.

Dye encouraged pastors to mirror the example of Joseph and learn humility, cultivate faithfulness, battle bitterness and grow in dependency.

“I don’t think Joseph’s dream was jail,” Dye said. “But he was faithful in the jailhouse.

Eddie Wren, pastor of First Baptist Church, Zachary, cited Colossians 4:12-13 to exhort pastors to endure in devotion to the Lord.

Wren said pastors should model the biblical character Epaphras who fought savagely, spiritually, specifically and sincerely for the Colossian Christians.

“Epaphras was a man of great understanding,” he said. “He understood there was more to life than meets the eye. He was aware of the tactics of the enemy. So, he fought on a different level.

“Epaphras understood physical fighting was worthless,” he said. “He needed divine power. Therefore, he bowed before the Father on behalf of his brothers and sisters in Christ.

“The only power we know that can change someone’s situation is God, and prayer is our access key to the power of God,” he continued. “He invites us to bring our requests to Him. He calls us to bear one another’s burdens to brings those requests to Him.”

Matt Carter, vice president of mobilization, North American Mission Board SEND Network, cited Matthew 13:15 as a reminder for pastors to endure in their calling.

Carter told the pastors when they are tempted to walk away from ministry, they should remember the beginning of their calling, learn to be content in their current calling and keep their eyes fixed on Jesus until the end of their calling.

“There are very few things in all the world that will dull your heart and dim your eyes and deafen your ears quicker than full-time vocational ministry,” he said. “If that’s where you are and you might be leaning that way, I want you to hear a couple of things. Number one, know you are not alone. Second, you cannot stay there.”

By JT Waresak I'm not a huge New Year's resolution guy. However, as a new year begins, it is another opportunity to raise the bar in my effort to be the best dad I can be. I'm also reminded that the opportune time to pour into my sons and daughters is limited to a couple of precious decades. This is not to say … END_OF_DOCUMENT_TOKEN_TO_BE_REPLACED