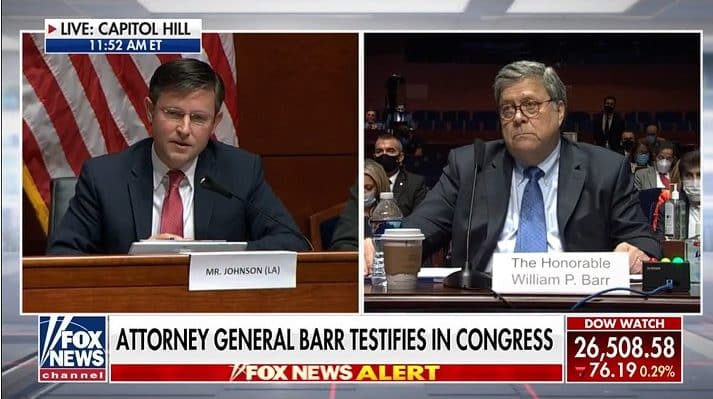 Congressman Mike Johnson used his time during a July 28 hearing before the U.S. House Committee on the Judiciary to allow U.S. Attorney General William Barr address some of key allegations made by Democrats against him. Screenshot

WASHINGTON (LBM) – In a July 28 hearing before the U.S. House Committee on the Judiciary, Democrats did not disguise their vitriol in attacks at a seemingly calm U.S. Attorney General Bill Barr, making lengthy accusations and cutting off the witness as he attempted to testify.

At one point, the angry monologs by two Democrats on the committee, Lou Correa (Calif.) and Mary Gay Scanlon (Pa.) caused Barr to quip, “This is a hearing. I thought I was the one who was supposed to be heard.”

But Republican members of the committee obliged Barr, even inviting him to speak at length.

Congressman Mike Johnson, a member of First Baptist Church in Bossier City and chairman of the 150-member conservative caucus known as the House Republican Study Committee, used his time to allow Barr to address some of the key allegations made by Democrats.

“The Democrats have asserted here this morning and they continue to say through the media that under your leadership the justice department has become highly politicized. Why is that a totally unfounded allegation?” Johnson asked.

Barr responded in context of his attempts to “restore the rule of law.”

Saying that there should be one rule of law for everybody, Barr told Johnson, “If you apply one rule to a, the same rule applies to b.

“I felt we didn’t have that previously in the department (an apparent reference to the Obama Administration). “We had strayed,” he claimed.

Barr also posed a challenge to opponents on the committee to give the names of enemies he has indicted and friends he has helped, pushing back against charges of bias against him.

Regarding the claim that he has helped Trump friends, Barr spoke specifically about the case of Roger Stone, a Republican adviser to the Trump presidential campaign in 2015 who was prosecuted under Barr.

“All along I thought that was a righteous prosecution, I thought he should go to jail and I thought the judge’s sentence was correct,” Barr explained. “But the line prosecutors were trying to advocate for a sentence that was more than twice anyone else in a similar position had ever served — and this is a 67-year-old man, first time offender, no violence, and they were trying to put him in jail for 7-9 years.

“I agree the president’s friends don’t deserve special breaks,” he added. “But they also don’t deserve to be treated more harshly than other people.”

Johnson also took a good portion of his allotted time to push back against the Democrat narrative of DOJ corruption under Barr.

Johnson also reminded the committee of the apparent admission of political bias in the DOJ during the previous administration.

“President Obama’s Attorney General Eric Holder famously referred to himself as President Obama’s ‘wing man,’” Johnson recounted. “He said in an interview ‘I’m still enjoying what I’m doing. There’s still work to be done. I’m still the president’s wing man. So I’m there with my boy.’”

Any tool can be misused. A hammer can construct or kill. An electrical wire can give instant light or, if mishandled, bring sudden death. … END_OF_DOCUMENT_TOKEN_TO_BE_REPLACED