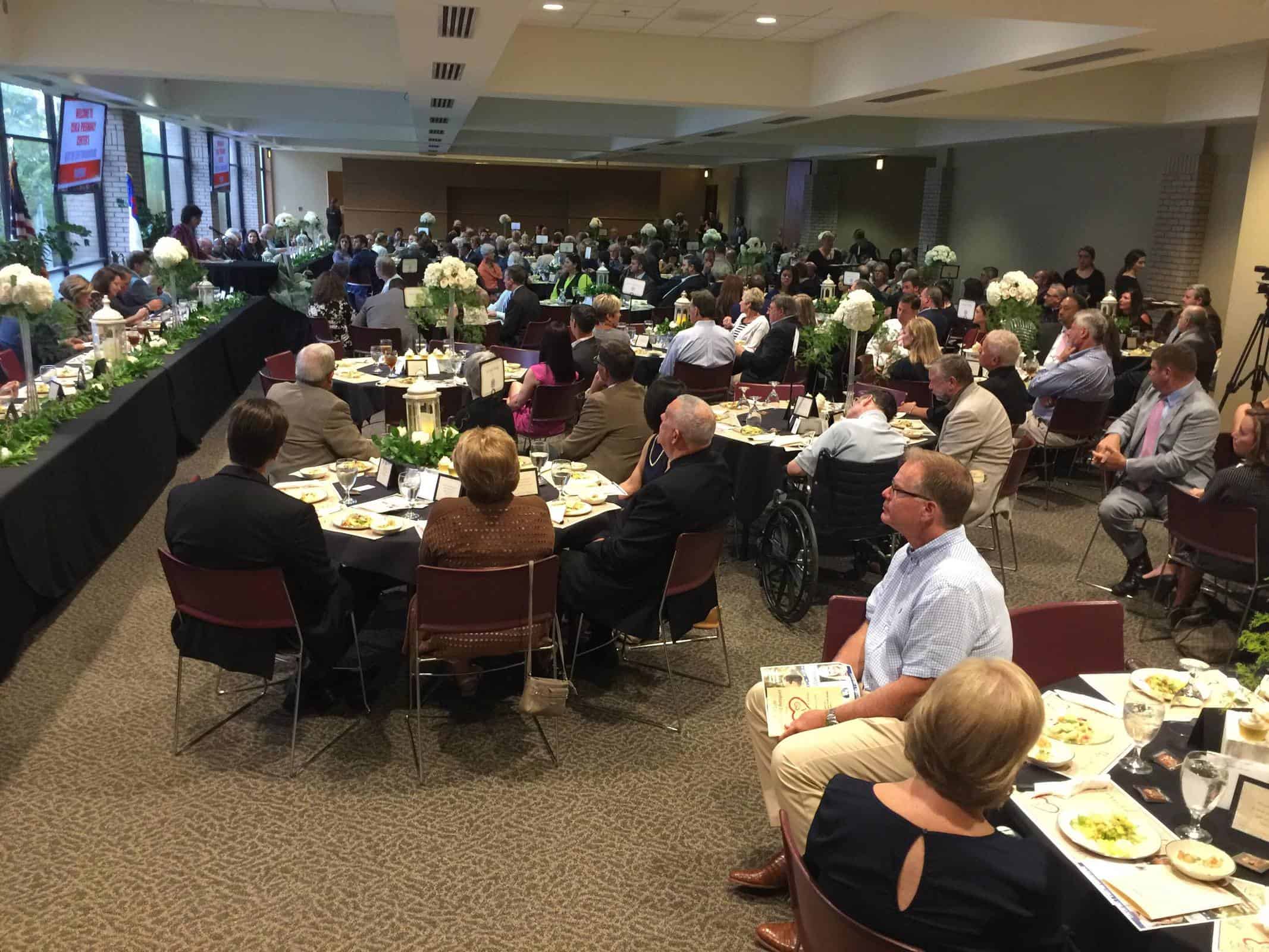 The Gift Of Life banquet drew 266 people inside Calvary Baptist Church in Alexandria.

ALEXANDRIA – Dallas Hixson took a trip down memory lane at the first-ever Gift of Life Banquet September 11 when he recounted how his birth mother chose adoption over abortion and gave him the gift of life.

During the event at Calvary Baptist Church in Alexandria, Hixson shared how his mother’s decision allowed him to live a life on mission for God.

“I’ve never asked why,” said Hixson, who was adopted from the Sellers Baptist Home in New Orleans after his birth mother gave him up for adoption in 1969. “I realize that because of the honesty and transparency of my parents about my adoption, just how blessed I am to be adopted.

“They’ve never ceased to remind me that I’m special and God has great things in store for me. They’ve also have continuously expressed how I’ve been given much and God expects much from me,” he added.

Hixson was one of several pro-life advocates who gave testimonies at the Gift of Life Banquet, a fundraiser for the Cenla Pregnancy Center in Alexandria that was attended by more than 250 people.

The event also featured recognition of individuals who played a vital role in creating the Cenla Pregnancy Center. Brian Gunter, pastor of First Baptist Church in Pollock and chairman of the center’s board of trustees and George Hardy, the center’s fundraising chairman, each were presented with special award gifts.

“Centers like this one do matter,” said Hixson, a deacon at Calvary Baptist Church. “The Lord is smiling on each one of you as supporters. He’s smiling on those that are instrumental in creating and running this center and those children who are saved from abortion through this center.

And although I am not a perfect man, I am making the most of the opportunity that she provided me by putting me up for adoption and taking the hard road,” he continued. “I ask you to continue letting all these young ladies that you encounter and that you serve know that their decision matters and to keep encouraging them to seek adoption versus abortion.”

Located next to the Baptist Building at 1254 MacArthur Drive in Alexandria, the center has served 131 women through pregnancy decision coaching by trained advocates, free pregnancy tests, free ultrasounds, information about pregnancy options, maternity and physical resources and post-decision support including parenting education and abortion recovery groups.

More than 200 churches of multiple Christian denominations have worked together to establish the pregnancy resource center, a non-profit, pro-life organization to provide compassionate support to women and men faced with difficult pregnancy decisions.

First Baptist Pollock was instrumental early in the process, when they began praying in January 2014 for the establishment of a pregnancy care center in central Louisiana. Originally, they pondered setting up a center in the back of their church property.

However, God had other plans.

Hundreds of churches, business leaders and other pro-life advocates in central Louisiana learned of the idea and began contributing money and other forms of support. By December 2016, a nine-person board of trustees formed, with members comprised of members from Big Creek, Central Louisiana and North Rapides Baptist Associations.

Cenla Pregnancy Center Executive Director Claire Lemoine said in her remarks she is grateful for the Louisiana Baptist Convention, under the direction of Executive Director David Hankins, for leasing the building to us for $1 per month.

“God has had his hand in every aspect of this ministry,” Lemoine said. “God has provided not only our material needs, but he has provided our emotional and spiritual protection as well, because it has been a battle.

“The devil does not want the Cenla Pregnancy Center to exist,” she continued. “But every morning before starting our day when we bow our heads, go to our Lord, present him our needs and surrender every aspect of the center to Him, including ourselves, the devil flees. He knows the power of Jesus Christ is one that will conquer evil and conquer his desire to steal, kill and destroy and He knows that within the walls of the pregnancy center Jesus is present.”

Gunter said he is amazed at how God has turned a dream of ministering to pregnant women in a room at First Baptist Pollock into what is a thriving Cenla Pregnancy Center.

“The Pregnancy Center has been an incredible success,” Gunter told the Baptist Message. “We have been open now for about eight months and in that time we have grown incredibly. I was shocked because we planned to open a ministry in the back of my church in Pollock and now here we are. We are in the center of Alexandria. We have an incredible facility. We have people from across central Louisiana supporting this ministry and we are serving over 130 mothers.”

By Jill Waggoner, ERLC WASHINGTON, D.C. (ERLC) - Richard Land served as the president of the Ethics & Religious Liberty Commission from 1988–2013. Prior to his time at the ERLC, he worked in a variety of church and political roles, many of which were involved closely with the modern pro-life movement in its … END_OF_DOCUMENT_TOKEN_TO_BE_REPLACED