By Victoria Watson, Wildcats Media PINEVILLE, La. (WildcatsMedia) -- Kyah Iles, founder of Six Feet Above, a non-profit organization dedicated to mental health awareness and suicide prevention, will speak at Louisiana Christian University today, Sept. 15, during a Suicide Awareness Event titled “Six Feet Above.” Iles is a resident of Central Louisiana and certified suicide interventionist and crisis interventionist instructor. Additionally, Iles has told her story of survival after her own suicide attemptto hundreds of students, educators, law enforcement officers, and mental health professionals throughout Louisiana. Taylor Dauzat, the mental health counselor at LCU, believes that suicide awareness and prevention affects everyone. “Suicide is definitely a big and growing area of concern over the last several years, especially among college students,” Dauzatsaid. “I was really inspired by her and her story and thought that she would be a perfect speaker for our students because when you are able to talk to someone who has really went through it and hear a story about a survivor, it impacts in a different way.” Iles said her focus is to break the stigma around mental health, notably in the Christian … END_OF_DOCUMENT_TOKEN_TO_BE_REPLACED 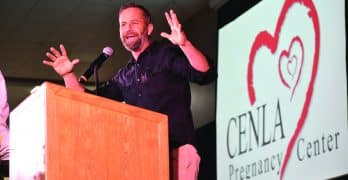 By Brian Blackwell, Baptist Message staff writer ALEXANDRIA, La. (LBM) – Former childhood television star Kirk Cameron encouraged more than 1,100 guests gathered at the CENLA Pregnancy Center’s Gift of Life Banquet to continue the fight in the pro-life movement that is gaining more and more momentum across the nation. The annual event was held at the Randolph River Front Center. “When I think of all that is going on at the CENLA Pregnancy Center, I see this whole strategy being carried out in a beautiful little microcosm right here in Alexandria and in your satellite locations,” Cameron said during the Sept. 13 event. “It’s driven by faith. The Gospel is shared. More importantly, people are coming into a relationship with God. “They are educating and talking to these young ladies about how they are made in the image of God, and these young women are learning about God’s value for families and children,” he continued. “They have an educational component for their clients and the community that is helping to liberate little babies, allowing them to live and giving all of us an opportunity to join in on what God is doing at the CENLA Pregnancy Center. “And the center, also, is involved in making people understand that … END_OF_DOCUMENT_TOKEN_TO_BE_REPLACED 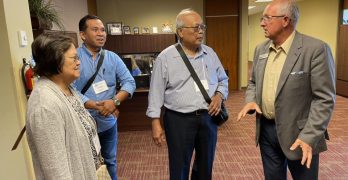 By Message staff ALEXANDRIA, La. (LBM) – Louisiana Baptist state missions and ministry directors and entity heads rolled out the welcome mat for more than 19 new pastors and eight spouses, Sept. 12. Held at the Baptist Building in Alexandria, the event featured remarks by Louisiana Baptists Executive Director Steve Horn, introductions by state ministries and entities, a tour of the building and lunch for those in attendance. The event was open to any pastor or staff member who had transitioned to the role of pastor since 2020. “The strength of our cooperation rides on the back of the strength of our relationships,” Horn told the Baptist Message. “Central to that cooperation is the strength of our relationships with pastors. And, how can we have strength in those relationships with those with whom we haven’t even met? “So, our ongoing vision is to start that relationship as early as possible when a new pastor arrives for his first pastorate in Louisiana,” he continued. “The intention of this event was to open the physical front door of our convention so pastors could hear the presentations from state missions’ directors and entity leaders and also tour our facilities,” Louisiana Baptists Pastoral Ministry Team … END_OF_DOCUMENT_TOKEN_TO_BE_REPLACED 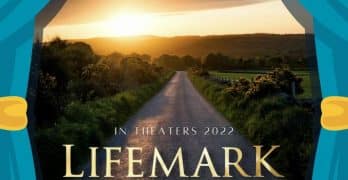 While he’s always wrestled with the idea he was adopted at birth, David knows he is loved and cherished by his parents and grandparents. As he turns 18, he’s excited and a bit nervous about what the future holds. But when Melissa, his birth mother, unexpectedly reaches out to him, David’s world is turned upside down. Should he respond to her? What about his birth father? What are they like? And why did they choose not to raise him? Facing the reality of his adoption, David must choose to either meet with his birthmother or go on with his life as he’s always known it. With the loving encouragement and support of his parents, and his best friend going along to capture on camera everything as it happens, David chooses to embark on a journey of discovery … and ultimately, forgiveness. From executive producers Kirk Cameron and the Kendrick Brothers—creators of War Room and Courageous—comes LIFEMARK, based on an incredible true story celebrating adoption, family, reconciliation, and love. Follow this link (LIFEMARK | The Grand Theatre) to find out what theater it is showing in your town.   … END_OF_DOCUMENT_TOKEN_TO_BE_REPLACED 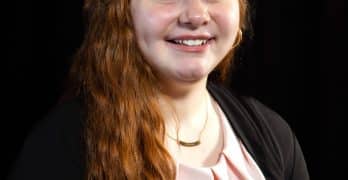 By Staff, Louisiana Christian University News PINEVILLE, Louisiana (LCUNews) -- Abigail Shields, a senior business management and marketing major from Deville, has earned a $500 scholarship award from international business honor society Delta Mu Delta. DMD awarded 66 scholarships nationwide this year to undergraduate and graduate students based on academics, leadership qualities, character, and service to the institution and community. “She is an intelligent young lady,” said Kenny Holt, dean of Young School of Business. “Because of her work ethic and servant’s heart, she naturally gravitates toward leadership positions in the School of Business.  The faculty awarded her the highest leadership award for the Young School of Business this past spring.  She accomplishes what she sets out to do with excellence.” Shields has a GPA of 3.92 and serves as the president of the LCU Chapter of Delta Mu Delta, Wildcats for Life and the Business Student Association. She is also the parliamentarian of the Student Government Association. After graduation from LCU, Shields said she plans to earn her Master of Business Administration before heading to law school and eventually entering the political arena. “I want to make a … END_OF_DOCUMENT_TOKEN_TO_BE_REPLACED 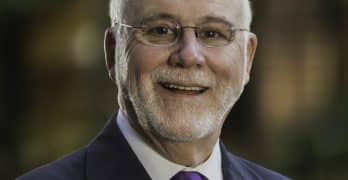 By Staff PINEVILLE, La. (LC News) – Louisiana Christian University has scheduled a Sept. 15 dedication for its new Jonathan E. Martin Master of Business Administration program. Launched this school year, the MBA is the newest graduate degree offered in the Young School of Business at LCU and received full approval by the Southern Association of Colleges and Schools Commission on Colleges (the university’s accrediting body) in July. Students can complete the 34-hour online program in just one year and can specialize in healthcare administration, data analytics or general management. “Our MBA program is designed to equip graduates for God’s mission,” LCU President Rick Brewer said. “In a recent ministry newsletter from C12, pastors interact with about 8.8 million nominal and non-Christians for 12 hours each year. Christian business leaders interact with about 118 million nominal and non-Christians for 2080 hours a year. The Martin MBA equips Christian business leaders to serve in the mission field of the workplace.” Roy O. Martin III, chairman, CEO and CFO of Louisiana-based RoyOMartin wood product manufacturer, echoed the thought. “LCU is filling a vital need in our community by offering the only online Master of … END_OF_DOCUMENT_TOKEN_TO_BE_REPLACED 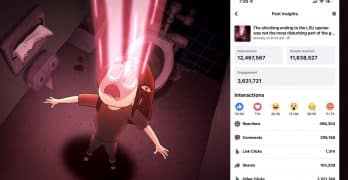 By Brian Blackwell, Baptist Message staff writer WASHINGTON (LBM) – A Facebook post by Congressman Mike Johnson warning families about the new FX cartoon “Little Demon” has reached more than 12 million people and been shared more than 157,000 times since Sept. 5. Johnson, who represents Louisiana’s 4th Congressional District and is a member of Cypress Baptist Church, Benton, shared his concerns about the show that was previewed during the Florida State-LSU football game Sept. 4 on ABC. According to the FX website, the show features a “reluctant” mother and her antichrist daughter as they try to live an ordinary life in Delaware. However, they are “constantly thwarted by monstrous forces, including Satan, who yearns for custody of his daughter’s soul.” Johnson, who has made four other Facebook posts about the show, said he was shocked Disney, which owns and markets FX, would expose so many individuals including children such as his own 11-year-old son to a trailer about a cartoon that has elements of satanism, graphic violence and profanity. “When I saw the trailer, I was alarmed,” Johnson told the Baptist Message. “It was not expected, and I couldn’t get to the remote fast enough to shield my son from it. I wondered … END_OF_DOCUMENT_TOKEN_TO_BE_REPLACED 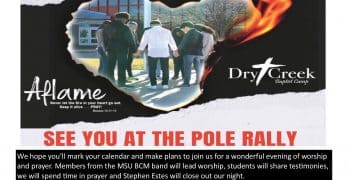 Dry Creek Baptist encampment will host Aflame, a See You at the Pole event, September 28 beginning at 6 p.m. Members of the McNeese State University band will lead worship, students will share testimonies and there will be a time of prayer and Steve Estes will close out the evening. Students, parents and faculty from all over are invited to attend this two-hour event … END_OF_DOCUMENT_TOKEN_TO_BE_REPLACED 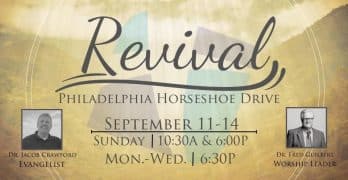 Philadelphia Baptist Church at Horseshoe Drive in Alexandria will have revival Sept. 11-14. Times are Sunday, 10:30 a.m. and 6 p.m. and Monday-Wednesday 6:30 p.m. Jacob Crawford will be the evangelist and Fred Guilbert will be the worship leader. … END_OF_DOCUMENT_TOKEN_TO_BE_REPLACED 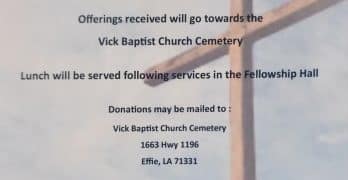 Robert Dukes, former pastor at Vick, will be the featured speaker at Vick Baptist Church's 107th homecoming celebration on Sept. 11. Services begin at 10 a.m. with lunch following the Worship service in the Fellowship Hall. … END_OF_DOCUMENT_TOKEN_TO_BE_REPLACED