By Diana Chandler, Baptist Press KARAJ, Iran (BP) -- Pastor Farshid Fathi, imprisoned in Iran for his faith since 2010, has been granted a Dec. 10 release from the notoriously brutal Rajai Shahr prison, two years earlier than expected, Elam Ministries has announced. Ann Buwalda, a board member of the Iranian-led ministry that engages in evangelism and discipleship in the Mideast nation, called the early release "positive news which has greatly encouraged Farshid and his family. We join them in praising God for this development and for those who have made it possible." The reason for the early release was not given, but Fathi was informed July 4 of his new release date, and the news was revealed to the public two days later, Elam Ministries reported. Fathi had been imprisoned since his arrest the day after Christmas 2010 at his home in Tehran and was originally taken to Evin prison. In a February 2012 trial, he was convicted of "action against the national security," accused of "cooperating with foreign organizations and evangelism," Elam Ministries said. His original sentence of six years was extended by a year in December 2014 on false charges. He had been injured in an attack by Evin prison guards on April 17, … END_OF_DOCUMENT_TOKEN_TO_BE_REPLACED

By David Roach, Baptist Press NASHVILLE (BP) -- Though some Christian colleges and universities are extending benefits to employees' same-sex spouses in the wake of the Supreme Court's nationwide legalization of gay marriage, the Council for Christian Colleges and Universities says it sees no legal reason for institutions of higher education to do so. Meanwhile, the Weekly Standard reported that Senate Democrats are divided on whether religious schools that oppose gay marriage could lose their tax-exempt status. Shapri LoMaglio, the Council for Christian Colleges and Universities' vice president for government and external relations, told Baptist Press Christian colleges and universities are not obligated by the Supreme Court's June 26 ruling to adapt employment, admissions or other policies to recognize same-sex marriage. CCCU is an association of "181 intentionally Christ-centered institutions around the world," according to the group's website. "The court's affirmation of the First Amendment ensures that institutions will be able to maintain policies consistent with their religious convictions," LoMaglio said in email comments. "The new legal status of national same-sex marriage paired with the First Amendment … END_OF_DOCUMENT_TOKEN_TO_BE_REPLACED 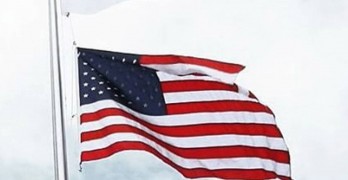 By K. Allan Blume, Biblical-Recorder SHELBY, N.C. (BP) - North Carolina pastor Rit Varriale wants to see churches fly the Christian flag above the American flag as a biblical statement, reversing flag etiquette that calls for the American flag to be flown in the prominent position. Varriale, as senior pastor of Elizabeth Baptist Church in Shelby, N.C., said the church installed its first-ever flagpole in order to raise the two flags in a special ceremony after morning worship on Sunday (July 5) in which the Christian flag was raised in the higher position -- which prompted interviews by Charlotte-area NBC, CBS and Fox affiliates. "If you stop and think about it, [flag etiquette] is inconsistent with what the Bible teaches us," Varriale said. "We are first and foremost Christians who are called to serve the living God." Varriale said the national motto of the United States, "In God we trust," signed into law in 1956 by President Dwight D. Eisenhower, acknowledges there is a Divine Being who is the greatest authority and to whom each person is accountable. "Before our accountability to government is our accountability to God," the pastor said. "So from a Christian perspective, our flag etiquette is completely … END_OF_DOCUMENT_TOKEN_TO_BE_REPLACED 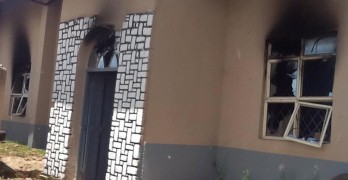 By Staff, Morning Star News JOS, Nigeria (BP) - The bombing of a mosque by the terrorist group Boko Haram sparked destruction at two churches in Jos, a major city in Nigeria’s north-central state of Plateau. The churches were attacked the night of July 5 amid a week of violence attributed to Boko Haram in which as many as 300 people were killed, both Muslims and Christians. The terrorist group’s stated aim is to impose sharia (Islamic law) throughout the country. An initial bomb was detonated at a shopping complex near the University of Jos while the second blast targeted the Yan Taya Mosque just minutes later, according to a report from a pastor in Jos relayed to Baptist Press. The explosion at the mosque, according to the information received from the pastor in Jos, has been widely seen as direct retaliation against Sheikh Sani Yahaya, who has encouraged Muslims to coexist peacefully with those who hold other religious beliefs. Subsequently, a crowd of Muslims attacked St. Michael's Parish of the First African Church Mission and, near the mosque, the Evangelical Church Winning All (ECWA) Good News Church. The attacks on the church buildings occurred at about 11 p.m. Isaiah Oluwagbayibi, pastor at St. Michael's, … END_OF_DOCUMENT_TOKEN_TO_BE_REPLACED 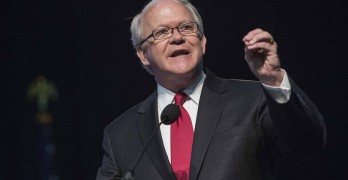 By Baptist Press NASHVILLE (BP) - Year-to-date contributions to Southern Baptist national and international missions and ministries received by the SBC Executive Committee are 1.45 percent above the year-to-date SBC Cooperative Program Allocation Budget projection, and 1.24 percent above contributions received during the same time frame last year, according to a news release from SBC Executive Committee President Frank S. Page. The year-to-date total represents money received by the Executive Committee by the close of the last business day of June and includes receipts from state conventions, churches and individuals for distribution according to the 2014-15 SBC Cooperative Program Allocation Budget. The $143,051,247.48 received by the Executive Committee for the first nine months of the fiscal year, Oct. 1 through June 30, for distribution through the Cooperative Program Allocation Budget represents 101.45 percent of the $141,000,000.00 year-to-date budgeted projection to support Southern Baptist ministries globally and across North America. The total is $1,752,801.88 or 1.24 percent more than the $141,298,445.60 received through the end of June 2014. The Cooperative Program is Southern Baptists’ channel of giving … END_OF_DOCUMENT_TOKEN_TO_BE_REPLACED 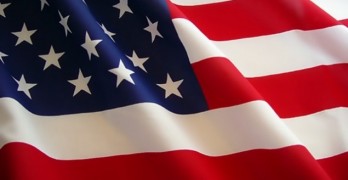 By Diana Davis, Baptist Press PENSACOLA, Fla. (BP) -- As our country celebrates the Fourth of July, how will you shine for Jesus? Plan ahead to use one of these simple, fresh ideas as an individual, small group or church to show support for elected officials and those assigned to keep peace in your community: -- Purchase a nice Bible for your town's mayor, signed with words of prayer and encouragement. -- An adult class could sign a thank you and prayer card to be delivered with a big sub sandwich tray for the city building. -- Prepare addressed envelopes to government leaders -- from local officials such as the police chief and city council members to senators, congressional representatives and the president. Each person writes one personal prayer note or the entire group could write prayer/thanks notes. -- A children's class draws fire trucks and praying hands for firefighters. Deliver them with homemade cookies. -- Each gesture of encouragement can include a Scripture, church business card or brochure and an invitation to worship. -- Our church did a "Seal a Badge with Prayer" ministry, assigning each individual police officer in our city to a church member for faithful prayer. -- Encourage a … END_OF_DOCUMENT_TOKEN_TO_BE_REPLACED 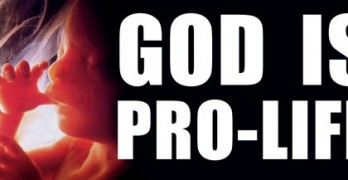 By Staff, Baptist Press ASHEVILLE, N.C. (BP) -- Pro-life regulations in Texas, North Carolina, Kansas and Iowa have been stymied in court challenges. Affected are a Texas law requiring abortion clinics to qualify as ambulatory surgical centers and for abortion doctors to have hospital admitting privileges; a North Carolina law requiring doctors to show pregnant women ultrasound images before performing an abortion; a Kansas law banning dismemberment abortions; and an Iowa Board of Medicine ban on "webcam" abortions. Texas The U.S. Supreme Court on Monday issued a stay of House Bill 2, which was slated to go into effect July 1, until the justices can consider whether to take up a challenge to HB 2 after their summer recess. The Supreme Court stay, in a 5-4 vote, prevents HB 2 requirements from going into effect requiring abortion clinics to qualify as ambulatory surgical centers (ASCs) and for doctors who perform abortions to have hospital admitting privileges. The U.S. Fifth Circuit Court of Appeals ruled June 8 that the two requirements are constitutional and can be enforced. According to Texas Right to Life, "The justices ruled that the provisions in question will effectively remain on hold and unenforced … END_OF_DOCUMENT_TOKEN_TO_BE_REPLACED 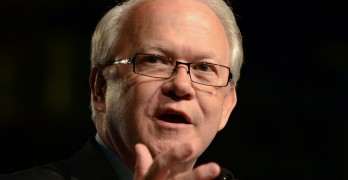 By Diana Chandler, Baptist Press BOWLING GREEN, Ky. (BP) -- Long before the U.S. Supreme Court legalized gay marriage nationwide, Southern Baptist Convention Executive Committee President Frank S. Page had planned to preach a sermon at Living Hope Baptist Church on "Finding Hope in a Fallen Culture." "Pastor Jay Pettus, who is away on sabbatical, had enlisted me to preach probably a year or more ago," Page told Baptist Press, "asking me to preach on how to have hope in a [post-] Christian, postmodern culture. The message had already been planned," connecting "powerfully with the events of the previous day. It just shows the power of the Holy Spirit." That same power will enable Christians to stand firm in faith and proclaim the spiritual truth of marriage the nation has deserted, Page said in his message at the Bowling Green, Ky., church. "When societal forces rise up -- we say we will stand against you in the power of the name of the Lord God Almighty," Page preached. "We either believe in it, or we might as well go home." If leaders will stand on the power of God's Word, congregations will be emboldened to follow, Page said, using the text of the shepherd boy David slaying Goliath in 1 Samuel 17, followed by the … END_OF_DOCUMENT_TOKEN_TO_BE_REPLACED 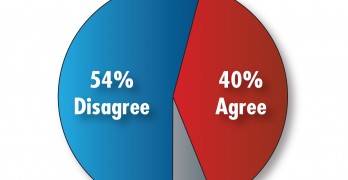 by Lisa Cannon Green, LifeWay Communications NASHVILLE (BP) -- In a nation founded on religious liberty, most Americans believe God has a special relationship with the United States, and they're optimistic the best is yet to come. Despite headlines lamenting the global decline of the United States since the Cold War, 54 percent of Americans believe the nation is on the upswing, according to a survey by LifeWay Research released July 1. Only 4 in 10 think "America's best days are behind us," LifeWay Research reported from data in a September 2014 survey. Though the U.S. Constitution makes no mention of God, 53 percent of Americans say they believe God and the nation have a special relationship, a concept stretching back to Pilgrim days. Even a third of atheists, agnostics and those with no religious preference believe America has a special relationship with God. "'God Bless America' is more than a song or a prayer for many Americans," said Ed Stetzer, executive director of LifeWay Research. "It is a belief that God has blessed America beyond what is typical for nations throughout history. I am sure that would spawn many theological conversations” but it's important to note a majority of Americans “think God has a … END_OF_DOCUMENT_TOKEN_TO_BE_REPLACED 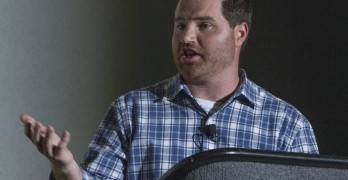 By David Roach, Baptist Press NASHVILLE (BP) -- With same-sex marriage now legal in all 50 states, pro-gay activists are shifting their focus to issues like alleged workplace, housing and public accommodations discrimination. Some have even proposed stripping churches of their tax-exempt status and legalizing polygamous marriage. Pro-LGBT activists view the Supreme Court's legalization of gay marriage "as a means to a greater end," said Jon Akin, pastor of Fairview Church in Lebanon, Tenn. -- "a huge means, but I certainly don't think it's the end. I think many will not be happy" if the advance of gay rights "doesn't go further." Akin, a member of the Ethics & Religious Liberty Commission's leadership council, has helped equip Fairview's members to share Christ with the homosexual community and respond to pro-gay activists. He told Baptist Press that in his experience, the push for expanded LGBT rights typically "doesn't come from animus of any kind. It stems from wanting cultural affirmation, seeing any form of discrimination as inequality." Following the June 26 Supreme Court ruling, the advocacy group Freedom To Marry said it would shut down and redeploy many of its resources to a new group called Freedom For … END_OF_DOCUMENT_TOKEN_TO_BE_REPLACED