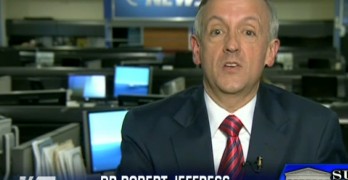 By David Roach, Baptist Press NASHVILLE (BP) -- In the days following the Supreme Court's nationwide legalization of gay marriage, Southern Baptist pastors have taken to television, radio, print media and social media in defense of biblical marriage. Undergirding their public engagement is a long line of Southern Baptist Convention actions underscoring biblical sexual ethics and calling for compassionate ministry to persons with same-sex attraction. "Pastors, this is our opportunity to speak into the media, to write into the media," said Mark Harris, pastor of First Baptist Church in Charlotte, N.C. The Supreme Court majority "tended to play social scientist. They tended to play counselor. They tended to play psychologist," Harris told Baptist Press. "But the one thing they didn't play was theologian," opening a door for pastors to add a biblical perspective to the national discussion. The day the high court's ruling was released, Harris did four television interviews, one on radio and one with The Charlotte Observer newspaper. The Observer also quoted Milton Hollifield, executive director of the Baptist State Convention of North Carolina. J.D. Greear, pastor of The Summit Church in Raleigh-Durham, wrote a blog … END_OF_DOCUMENT_TOKEN_TO_BE_REPLACED

By Will Hall, Message Editor When the gavel dropped to end the Southern Baptist Convention’s annual meeting in Columbus, Ohio, it also marked the fifth anniversary of “a vision for a Great Commission Resurgence” that was adopted by messengers during the 2010 business sessions in Orlando, Fla. In a nutshell, a blue ribbon task force – named by then SBC President Johnny Hunt, pastor of First Baptist Church, Woodstock, Ga., and led by Ronnie Floyd, pastor of Cross Church, Northwest Ark., who now serves as president of the Convention – developed seven components of a plan “to mobilize Southern Baptists as a Great Commission people” with the goal of “penetrating the lostness” in North America and around the world. Theirs was a daunting task, given the extent of the growing lostness in our country and abroad, and the apparent waning effectiveness of Southern Baptists in sharing the Gospel. But, after so much effort was expended to convince somewhat skeptical Southern Baptists (reports varied on whether the “show-of-hands” vote was 60-40, 80-20 or 3-1 in favor) that these actions were “of vital importance to the future of our denomination” and “key to making immediate progress toward a Great Commission Resurgence,” it is … END_OF_DOCUMENT_TOKEN_TO_BE_REPLACED 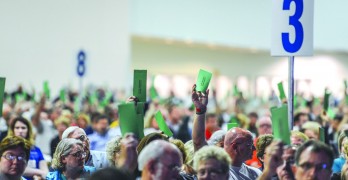 By Tom Strode, Baptist Press COLUMBUS, Ohio (BP) – Messengers to the 2015 Southern Baptist Convention adopted nine resolutions – some on culturally divisive issues – with almost no opposition. All the resolutions offered in the Tuesday afternoon session (June 16) at the SBC’s meeting gained passage by unanimous or nearly unanimous votes. The messengers affirmed biblically based stances on such topics as same-sex marriage, racial reconciliation and the sanctity of human life, as well as religious persecution and pornography. Approved resolutions also called for spiritual awakening and celebrated the 90th anniversary of the Cooperative Program. Prior to the convention, the Resolutions Committee received only four resolutions, an unusually small number. As a result, the committee initiated more resolutions than normal, but committee chairman Steve Gaines said finding topics proved no problem. “There are so many pressing issues morally and spiritually in our nation right now, it really didn’t take long to figure that out,” Gaines said at a news conference after the committee’s report. He illustrated for reporters what he meant by pointing to a few of the resolutions. “When it comes to our nation, when you look back … END_OF_DOCUMENT_TOKEN_TO_BE_REPLACED 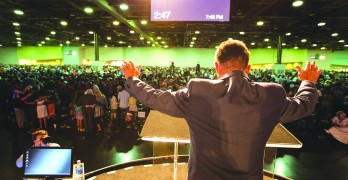 By David Roach, Baptist Press COLUMBUS, Ohio (BP) – Spiritual awakening, the defense of marriage and the preservation of religious liberty were among key themes addressed by messengers at the Southern Baptist Convention annual meeting June 16-17 in Columbus, Ohio. The meeting was highlighted by a Tuesday night prayer gathering led by SBC President Ronnie Floyd, at which an estimated 7,000 Southern Baptists spent two hours asking God for a third Great Awakening in America and the global advance of the Gospel. The gathering was watched by an additional 8,000 people online and broadcast on Daystar television. The 5,407 registered messengers – up from 5,294 in Baltimore last year – also took several actions to advance racial and ethnic diversity within the SBC and celebrated nearly 60 missionaries during the first-ever joint missions service of the International and North American Mission Boards. Floyd, who was reelected to a second term as SBC president, called in his presidential address for Southern Baptists to provide spiritual and moral leadership amid a time of crisis in the world that also is “our most defining hour as Southern Baptists.“ Building on Floyd's address, the June 16 prayer time featured intercession led … END_OF_DOCUMENT_TOKEN_TO_BE_REPLACED 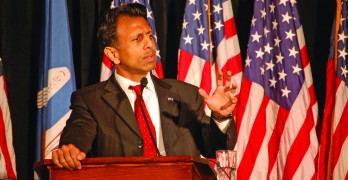 By Staff, Baptist Message NEW ORLEANS – Gov. Bobby Jindal still believes in the American dream. “My dad and mom came to Louisiana because they believed in America. And when they got here they found that the legend was true,” said Jindal as he officially launched his campaign June 24 for the GOP presidential nomination. “They found that the people of Louisiana accepted them. And they found that America is indeed the land of the free and home of the brave. “He told me as a young kid that Americans can do anything,” said Jindal. “I believed him then, and I believe it now.” Before a crowd of a 1,000 supporters at the Pontchartrain Center in Kenner, the 44-year-old Jindal told the crowd he was “running for President without permission from headquarters in Washington, D.C." He enters a crowded field as there are 15 others who got in ahead of him with speculation that several others candidates may be joining the race as well. Jindal, who is completing his second term as governor, is no stranger to politics and has quite the résumé as well as a string of accomplishments that would rival most elder statesmen. A Rhodes Scholar, he was named to run the state Department of Health and Hospitals at the age of 25 and was the … END_OF_DOCUMENT_TOKEN_TO_BE_REPLACED 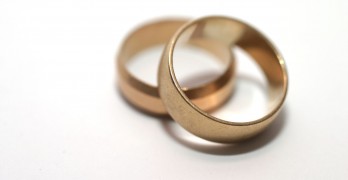 By Will Hall, Message Editor WASHINGTON (Baptist Message) -- Citing “new insights” and “changed understandings” about marriage, the U.S. Supreme Court voted 5-4 that the “Fourteenth Amendment requires a State to license a marriage between two people of the same sex.” The ruling effectively caps the sweeping federal judicial activism that has overturned 26 voter-approved amendments to protect marriage as between a man and a woman (22 of these states were still fighting to preserve traditional marriage). Another 13 states had laws allowing marriage only between a man and a woman, but 10 were facing challenges in federal courts when the decision came down today. Voters in only three states, and the District of Columbia, had approved same-sex nuptials, but another eight state legislatures had passed laws making gay marriages legal. Now, a vote among nine federal justices, split largely along partisan lines, has redefined marriage in all 50 states. Justices Breyer and Ginsburg (Clinton appointees) joined with Justices Kagan and Sotomayor (Obama appointees) to vote for legalizing same-sex marriage. Opposing the move were Justices Roberts and Alito (G.W. Bush appointees) as well as Justices Scalia (Reagan-appointed) and … END_OF_DOCUMENT_TOKEN_TO_BE_REPLACED 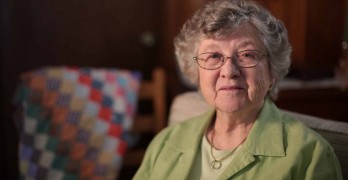 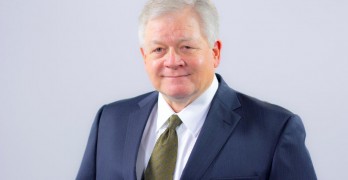 By Baptist Press staff COLUMBUS, Ohio (BP) - Gibbie McMillan, a pastor and Louisiana Baptist men's ministry and volunteer strategist as well as state director of disaster relief, was among 11 late nominees the Southern Baptist Convention entity trustees elected June 16 at the SBC annual meeting in Columbus, Ohio. Also at the annual meeting, messengers asked questions of two SBC entity heads. The 11 additional proposed trustees were nominated by a seven-member subcommittee of the Committee on Nominations appointed at the committee's March meeting in Nashville. The need for late nominations arose for a variety of reasons such as initial nominees' opting not to serve, trustee resignations and trustee deaths. The Committee on Nominations' entire slate of nominees to the SBC Executive Committee, the four convention boards, the Ethics & Religious Liberty Commission, the six seminaries and the Committee on Order of Business was elected after messengers rejected Virginia messenger Brent Hobbs' motion to replace International Mission Board nominee Tom Polvogt of First Baptist Church in Katy, Texas, with Johnson Ellis of Prestonwood Baptist Church in Plano, Texas. The 11 late nominees were: -- EXECUTIVE COMMITTEE: … END_OF_DOCUMENT_TOKEN_TO_BE_REPLACED

By Baptist Press CHARLESTON, S.C. (BP) -- Less than 24 hours after his mother died at the hands of an assassin during a church prayer meeting, Charleston Southern University sophomore Chris Singleton stood before television cameras and declared that "love is always stronger than hate." Flanked by coaches and teammates, Singleton, who plays baseball at CSU, thanked his teammates for their "amazing" support and recalled his mother's example of showing love to others. "If we just love the way my mom would, then hate won't be anywhere close to what love is," he said. "My mom was a God-fearing woman. She loved everybody with all her heart." Sharonda Coleman-Singleton, 45, was a speech therapist and women's track-and-field coach at Goose Creek High School outside Charleston. She was one of nine people shot to death June 17 by a lone gunman in the basement of Emanuel African Methodist Episcopal Church in downtown Charleston. Chris Singleton recalled a game in which he was standing in the on-deck circle. He caught his mom's eye, and she told him she was praying for him. "Mom, don't you think I already did that?" he said. His mom replied, "You can never have too much prayer." Answering reporters' questions, Singleton … END_OF_DOCUMENT_TOKEN_TO_BE_REPLACED 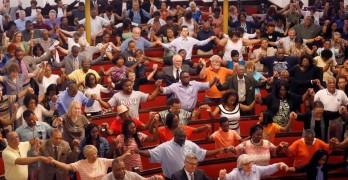 By Baptist Press CHARLESTON, S.C. (BP) -- The national media spotlight has been on Charleston for several days following the massacre of nine Christians during a Wednesday night Bible study at the predominantly black Emanuel AME Church. A 21-year-old white supremacist, Dylann Storm Roof, joined in the service for about an hour before opening fire on the group. This act of racist hate could have exploded into confusion and violence, but the light from Charleston has shone brighter than the media light that has been on the picturesque South Carolina city. Roof said he chose Charleston "because it is the most historic city in my state. Someone has to take it to the real world, and I guess that has to be me." What Roof soon discovered was that the hate and evil he demonstrated was met with real-world Christians who chose to respond with what seemed like unbelievable love and forgiveness. Chris Singleton, a sophomore at Charleston Southern University and member of the baseball team, felt the pain of the attack. His mother was one of the nine who was shot and killed. Less than 24 hours following her death, he said, "Love is always stronger than hate." Charleston Mayor Joseph P. Riley said, "If that guy thought in his … END_OF_DOCUMENT_TOKEN_TO_BE_REPLACED