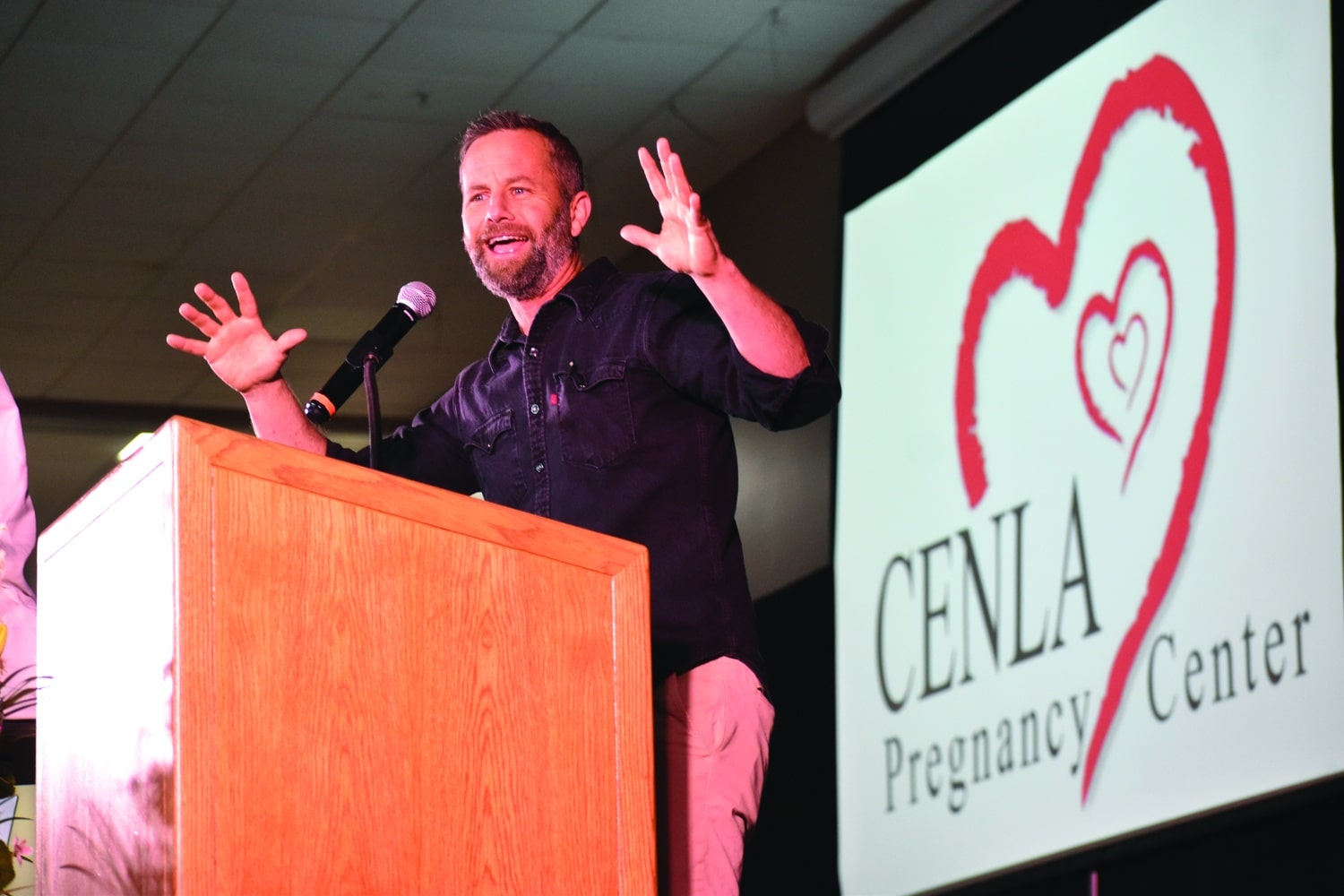 ALEXANDRIA, La. (LBM) – Former childhood television star Kirk Cameron encouraged more than 1,100 guests gathered at the CENLA Pregnancy Center’s Gift of Life Banquet to continue the fight in the pro-life movement that is gaining more and more momentum across the nation.

The annual event was held at the Randolph River Front Center.

“When I think of all that is going on at the CENLA Pregnancy Center, I see this whole strategy being carried out in a beautiful little microcosm right here in Alexandria and in your satellite locations,” Cameron said during the Sept. 13 event. “It’s driven by faith. The Gospel is shared. More importantly, people are coming into a relationship with God.

“They are educating and talking to these young ladies about how they are made in the image of God, and these young women are learning about God’s value for families and children,” he continued. “They have an educational component for their clients and the community that is helping to liberate little babies, allowing them to live and giving all of us an opportunity to join in on what God is doing at the CENLA Pregnancy Center.

“And the center, also, is involved in making people understand that we cannot get out of the political field as difficult, and dark, as it is,” Cameron said. “We have got to overcome the darkness by flooding it with life.”

Cameron was the keynote speaker for the fundraiser, which drew its largest crowd ever for its Gift of Life Banquet. The event also featured remarks by other pro-life advocates, an update on the impact of the center and an introduction of its new executive director.

From August 2021 through July, the CENLA Pregnancy Center (including its two satellite locations in Marksville and Vidalia) have served 361 clients and seen 331 babies saved. In July, the celebrated the opening of its Vidalia facility.

The centers are saving lives by offering such services as pregnancy decision coaching (by trained advocates), free pregnancy tests, free ultrasounds, information about pregnancy options, referrals to mental health counselors and obstetrician-gynecologists, safe house and affordable housing recommendations, adoption support (referrals to assist expectant mothers with an adoption plan and limited financial assistance) and post-decision support that includes parenting education as well as recovery groups for those who regret having an abortion.

The ministry also recently began offering abortion pill reversal services. The center is listed on a national hotline that connects CENLA Pregnancy Center staff with women seeking to reverse the effects of the first pill taken for chemical abortion.

FROM ATHEIST TO EVANGELIST

Cameron, who at 14 landed the role of Mike Seaver on the 1980’s sitcom “Growing Pains,” was drawn into the lifestyle of a celebrity. However, three years later he was convicted of his need for a Savior and turned from atheist to Christ-follower.

Later in his career, Cameron began working on movies like “Left Behind,” “Fireproof” and most recently “Lifemark.”

Released on Sept. 9, “Lifemark” was inspired by the 2017 documentary “I Lived On Parker Avenue,” which details the story of David Scotton who was born in Indiana and placed with his adoptive family in Metairie in 1993.

Cameron said he is passionate about his latest film because his wife, Chelsea, and four of their six children are adopted.

“I’m so grateful for the young moms who chose to give their kids life because four of my six kids were adopted kids along with my wife. It’s scary to think that all of them were one doctor away from not existing,” he said. “And if my wife had not been born, neither would our other two children be here today.

“They were impacted by the loving support, care, and encouragement from pregnancy centers and those who supported them,” Cameron said. “Those centers helped the birth parents believe that the babies inside of them were not a mistake but a living miracle. They took the opportunity to turn a difficult situation and made it into something beautiful.”

Board President Ed Tarpley thanked the crowd for their continued support.

“We give God all the praise and glory of what He has done here,” said Tarpley, a member of Kingsville Baptist Church, Ball. “Our staff with Claire Lemoine as executive director and all the others have done a magnificent job. Enjoy the fellowship and friendship but most of all enjoy being a part of the cause for life in Cenla as we reach out to help needy young women and their babies.”

Brian Gunter, pastor of First Baptist Church, Livingston, and previous board chairman, presented Lemoine with a plaque and gift of appreciation for her five years of service as the center’s first executive director. Lemoine will step down Sept. 15 and hand over her duties to incoming Executive Director Kim Lyons.

“For the last five years Claire has done an incredible job leading CENLA Pregnancy Center,” said Gunter, who resigned earlier this year as founding board chairman when he moved to Livingston. “Babies are alive today because of the CENLA Pregnancy Center. Mothers and fathers have heard the Gospel and they have been given hope and these babies have been given good homes.”

Lemoine asked the crowd to continue praying for the center and thanked the crowd, staff, family, and community for their continued support.

“These past five years have taught me so much about true, authentic, Christ-like love and mercy and so much about the miracle of life,” she said. “My time as executive director of CENLA Pregnancy Center has come to a beautiful end and this season of my life is complete. I’ll forever be grateful to God for making so clear his calling and his enabling me to step out of the boat and into unknown waters to lead this ministry for the past five years.”

Lyons told the crowd she is excited about serving as the next executive director.

“There is so much gratitude in this room for the tremendous work that Claire and the team of people and more importantly the community have done as they came together to build this ministry,” she said.

“This community is amazing,” she continued. “This room is full of faithful, trusting servants and disciples that are here. When the Lord opened this opportunity for me and showed me this was the next move, it was very easy. I continue to live in His will, trust His call and trust where He is leading me and taking me, my husband, and my four beautiful children and trust when He opens the door I can step with faith right in it.”

For more information about the CENLA Pregnancy Center, visit cenlapc.com.