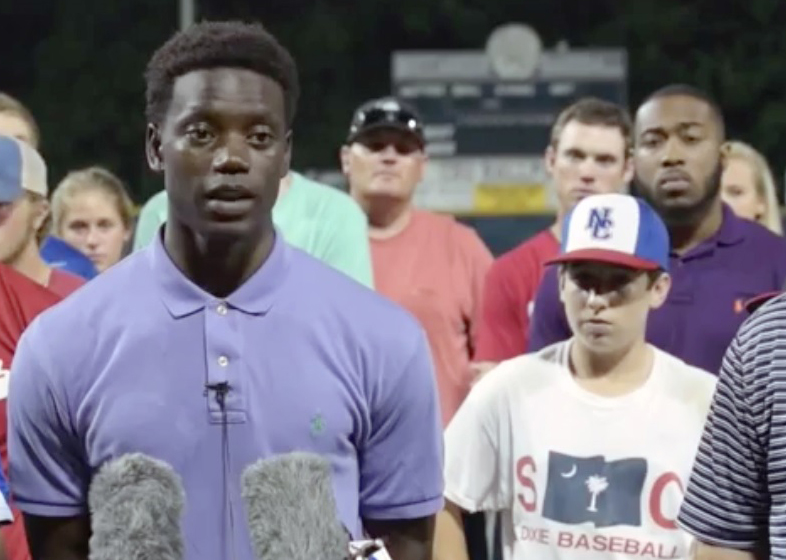 Charleston Southern University sophomore Chris Singleton addresses reporters less than a day after his mother was killed by an assailant in a downtown Charleston church. Screen capture from CSU Communications video

CHARLESTON, S.C. (BP) — Less than 24 hours after his mother died at the hands of an assassin during a church prayer meeting, Charleston Southern University sophomore Chris Singleton stood before television cameras and declared that “love is always stronger than hate.”

Flanked by coaches and teammates, Singleton, who plays baseball at CSU, thanked his teammates for their “amazing” support and recalled his mother’s example of showing love to others.

“If we just love the way my mom would, then hate won’t be anywhere close to what love is,” he said. “My mom was a God-fearing woman. She loved everybody with all her heart.”

Sharonda Coleman-Singleton, 45, was a speech therapist and women’s track-and-field coach at Goose Creek High School outside Charleston. She was one of nine people shot to death June 17 by a lone gunman in the basement of Emanuel African Methodist Episcopal Church in downtown Charleston.

Chris Singleton recalled a game in which he was standing in the on-deck circle. He caught his mom’s eye, and she told him she was praying for him. “Mom, don’t you think I already did that?” he said. His mom replied, “You can never have too much prayer.”

Answering reporters’ questions, Singleton admitted that his knees were “a little weak right now, but I’m trying to stay as strong as I can while I press on.

“I just think about her smile,” he said.

Singleton described Emanuel AME as a place where he felt like “everybody’s grandson.”

“This church is such a family,” he said. “It’s tough times, but our church will get through it. Everybody will press on.”

Following the press conference, Singleton’s teammates and coaches surrounded him and placed their hands on him while a coach led the group in a prayer.

In a school press release, CSU baseball coach Stuart Lake said the players and coaches are hurting and are praying for Singleton and his family. “Chris’s mother was just that parent that, as a coach, you are proud to have as part of your program,” he said. “What she brought to our team is immeasurable.”

School president Jairy C. Hunter Jr. said the CSU family is “praying for Chris and his family during this painful time. CSU coaches and campus ministers are assisting the Singleton family as they deal with this tragedy.”