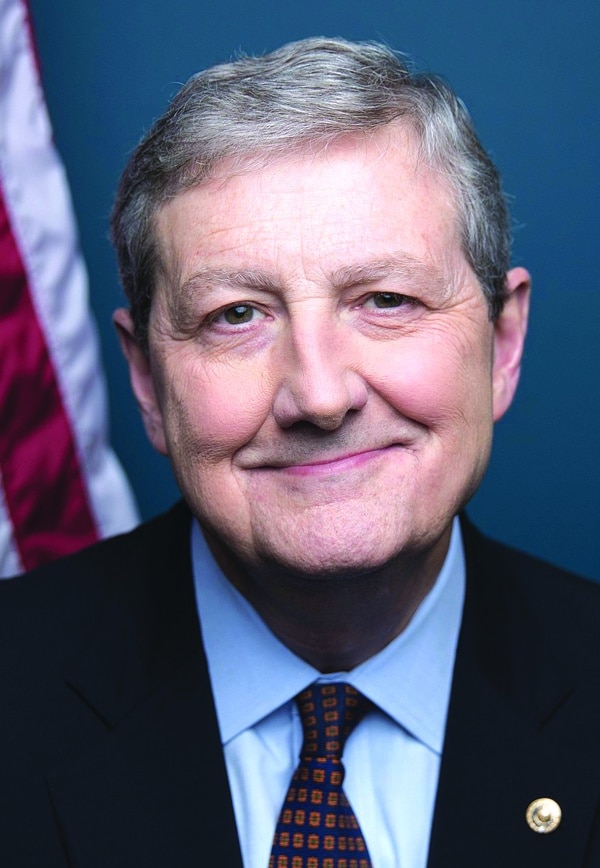 ALEXANDRIA, La. (LBM)—U.S. Senator John Kennedy stopped by the Louisiana Baptist state mission center in Alexandria, July 7, to share words of encouragement and gratitude about statewide disaster relief efforts during the last two years, and he weighed in on some key social issues impacting the state and the nation.

In a meeting with Steve Horn, executive director of the Louisiana Baptist Convention, Kennedy lauded the faith community for its quick and sustained response to the four hurricanes which devastated the state, 2020-2021.

Kennedy said Louisianans now are having to deal with insurers who do not want the risk of writing policies in areas hit hard by Hurricanes Laura, Delta, Zeta and Ida.

“I hear complaints every day,” he said.

“President Biden implemented a new program based on a computer algorithm they say can measure risk over the next 100 years of every individual home,” he said. “When we asked to see the computer software — to let our people look at it — they wouldn’t. It’s going to hit Louisiana hard. There are about 5 million policyholders in the country, with 500,000 of them in Louisiana.”

A member of the powerful Senate Appropriations Committee, Kennedy also shared his concerns about inflation’s impact on the nation and the double hit on Louisiana because of the Biden Administration’s attacks on the energy sector. He said he worked hard to make sure Louisiana got its fair share of federal money, but that some funding was excessive.

“Congress appropriated outside its normal budget about $7 trillion. Probably the first $4 trillion was necessary,” he said. “But then President Biden — when the economy was recovering, we were in a V-shaped recovery — insisted on passing another coronavirus bill which wasn’t a coronavirus bill. It was a Green New Deal and welfare bill. That put us over the top.”

He said the infusion of this extra cash kick started inflation “almost immediately.”

Now, he said, the Federal Reserve must “soak up” the $7 trillion it printed; Congress must “stick with its budget”; and the president “has to get his boot off the neck off the oil and gas industry” – adding emphasis to this third point.

“Three years ago, we were energy independent and nothing Russia did, or the Middle East did was of consequence to us — we were producing our own fuel. President Biden has forfeited our energy independence,” he added. “There is a shortage of oil and natural gas, therefore the price went up on us.”

He emphasized that more cheap fossil fuel is needed to pull the country and the world out of the present financial crisis, arguing that the economy “cannot grow without energy.

“The truth is there is great potential in wind and solar and hydroelectric power,” Kennedy observed, adding that there needs to be a new emphasis on nuclear power, too. But, he insisted, “Fossil fuels have got to be a part of the plan. Eighty percent of our energy comes from fossil fuels. You can’t just get up on a Monday morning and say, ‘No more fossil fuels.’”

Regarding the recent surge of chemical and surgical procedures to effect transgender transitions among teens and adolescents, Kennedy said the “science is pretty clear.”

“There are two genders: male and female,” he said. “Gender dysphoria does exist, but it’s extremely rare.

If you want to talk about a lifestyle change and dress another way that’s one thing. But once it becomes a medical issue that’s quite another thing.”

On this point, he said the United States is behind countries in Europe and Scandinavia (some that pioneered transgender procedures), which have taken steps to protect children and youth from permanent changes to their young bodies by making them wait until they are young adults and mature enough to give informed consent.

“One of the drugs they give these young people is the same drug that pedophiles voluntarily take. It’s chemical castration and medically irreversible,” he added. “It’s insanity.”

Kennedy also expressed alarm about “the deterioration of the family and the nation,” pointing to a radio report he heard earlier in the day about the crime spree erupting in New Orleans and noting that the key issue was not being addressed.

“There is a reason society, for thousands of years, has organized itself around the family unit. If you are raised by a single parent – and we have a lot of single parents — you are six times as likely to have your child grow up in poverty,” he said.

He noted that fatherlessness also correlates to lawlessness.

“We won’t be able to solve the crime problem until we talk about restoring the family,” he concluded.

Kennedy predicted the marijuana industry will continue to be frustrated by the Senate at least regarding bank access. But he offered that most of the legalization fights “will happen at the state level.”

“We have kind of shut them down at the federal level because they can’t really grow without a financial system. Right now, they can’t use banks,” he explained. “There is a bill to try to change that — I am against it and I don’t think it has a chance of passing.”

He said officials, unfortunately, are lured by projections of additional revenues.

“The impetus at the state and local level is the taxes. Same for gambling,” Kennedy said. “It’s all about the money.”

Kennedy and his wife Becky are founding members of North Cross United Methodist Church in Madisonville, and he said his faith is critical to his work in the nation’s capital on behalf of the people of Louisiana.

“Every morning I pray for wisdom, courage, love and strengthening of my faith,” he shared. “I also pray, ‘Don’t let me hate.’ You’re in this environment in Washington where they are all lined up against you — the bureaucracy, the media — the deck is stacked. But you can’t hate.”

Horn ended the meeting by praying for Kennedy.